Waking up on our last day in New Zealand was a bit sad, and also a bit of a relief. It had been so much fun, but also kind of hard given that James and I were both still quite sick the whole time. So we got up, went down for our last tasty hotel breakfast, then finished up our packing.

We had just enough time for James to get a quick head massage, so he did, then we checked out, had the van brought around, and did a final clean and pack of it. It's amazing how much junk can accumulate in a vehicle in only nine days!

Then we were off to Auckland airport. I was driving, but the GPS made some directions quite confusing, so I took a wrong exist off the highway...then did it again! We were all getting pretty frustrated as it was making us run late and we were already towing the line on time (not really, but in terms of how early we wanted to get to the airport). James, the more experienced traveller, tried to tell us it would all be fine even if we weren't checked in at the airport two hours before the flight, but that didn't help the mood much. He also took over driving, which I appreciated because I was a bit of a mess after my mistakes.

We followed the road signs to the airport after that point, rather than the GPS, ad made good time. We did have to stop to refuel the van, which was stressful with the time concerns. We made it to the airport and the car return parking...and had no idea what to do. There were booths for other companies, but not ours! I ran up to one of the booths, and was told the relevant attendant was wandering the lot inspecting cars. So I tracked him down, handed off the keys and that was it. Then we scurried into the airport and, to our collective relief, checked in and sent of our luggage with no problems.

Auckland is a much smaller airport than Sydney, so after a tiny bit of wandering we settled down for some drinks and chips. After a little while Nat and Luke wanted to head to the gate, but James and I didn't so we parted ways again. You learn things about people when travelling together - as a couple James and I like to be on time, but not too early, whereas (at least with planes) the others like being their well before time. We just didn't want to sit at a gate for half an hour if we could sit with food and tea instead! 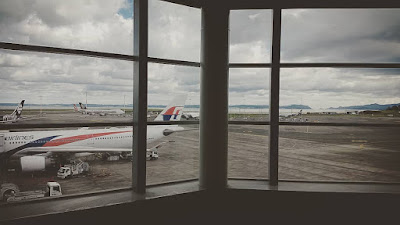 James took this shot as we wandered the airport.

But after a bit James and I headed to the gate as well, and it turns out our plane was delayed. Imagine a hundred people in a waiting area, just waiting while the automated announcements are telling you your plane is leaving, but nothing is happening! It was a bit freaky!

After a while of waiting shuttle busses arrived to take us to the plane, which we boarded out on the tarmac. The boarding ramp was fun, and I took a cute photo of James! 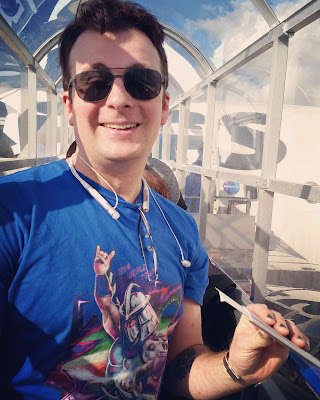 Then it was into our seats for another three hour flight home. The plane was a bit on the empty side - we found out later it's normally used only for domestic flights, not international. Which caused some problems - the on-demand entertainment system didn't work! The poor staff copped so much shit over that; the cabin crew restarted the whole system several times but nothing worked, yet still passenger would harass the flight attendants over it. Ugh. It's not a long flight! 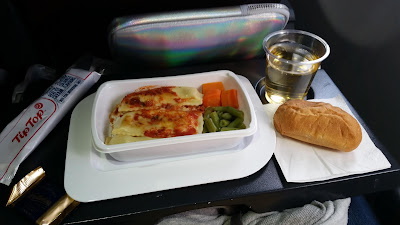 A food photo, because food.

In a way though, other passengers being unpleasant was good for us. James got up at one point to get me some water, and started chatting with a flight attendant called Natasha, who complimented him on his nail polish. He explained why he had spiffy nails, they got to talking, they came over so he could show off photos on my phone, and after a good long chat (she was super nice!) she excused herself. Then five minutes later she came back with business class Qantas pyjamas for all four of us! So nice! 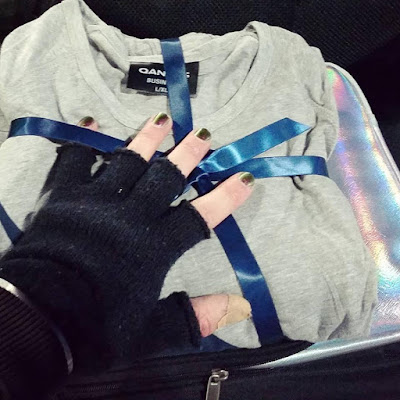 James took this photo later on.

We thanked her profusely and spent more time chatting with her and a male flight attendant whose name I forget. Then after we landed and we were waiting for the front half of the plane to clear so we could get out we chatted some more. And then, later still after we disembarked and had paused to use a bathroom, we passed her in the terminal. Such a pleasant experience ^__^

However, things went a bit downhill from there. We'd organised a shuttle from the airport to home, which arrived a bit late. No big deal. But they were waiting for another passenger as well, whose flight had been delayed. So we sat, tired and sick, in a minibus going nowhere for over an hour, until the driver decided he'd take us back and the company would organise something else for the other passenger. We got five minutes down the road, and the company called. The other passenger was ready, and he had to go back for her. Ugh. Never using that company again.

But eventually, we were home. Around two hours alter than planned, but still. Home (still not unpacked from moving) sweet home.

All in all, New Zealand was amazing! Obviously, getting married was the purpose and the number one highlight, but I just loved being in that country so much. There were ups and downs ont he trip, and I would have loved to have felt better the whole time but still, it was a great first overseas travel experience. It was so beautiful and the people were lovely and I'm very excited to go back again sometime!
Posted by Roli at 8:06 pm