In the beginning of March I set myself aside a little spending money for lolita. Part of that went to this Bodyline order, and the remainder on acquiring an Infanta blouse that I really love the look of! I was originally going to trial ChinaBuy.com.au as it's a new taobao shopping service based in Australia, but they didn't reply to my order email, though I did see from someone else's review that around the time I sent that they were having trouble with their site, so it was probably lost in the email abyss. So I thought I'd try Clobba, since I only really wanted one thing. But, once on their site, I got distracted by socks, so my order became a tiny bit larger ^__^

Ordering from Clobba was so simple. Following instructions on their website, I sent in an email over the weekend, more specifically the 15th of March, and got a reply on Monday including an apology that email replies are slow over the weekend. I had a couple of questions so we exchanged a few emails, but there was never a full day between sending an email and receiving a friendly, helpful and polite reply. So after starting the conversation on Saturday and filling out the order form I got and paid the PayPal invoice on Wednesday. On the 7th of April I got an email saying it had been sent to the collection centre the previous Friday. I received my package on the 6th of May. This was a bit longer than it normally takes packages from to get to me, but still a reasonable turnaround.

So overall I think Clobba is a fantastic place to buy certain taobao goods from because my order took approximately two weeks from order to postage, and two weeks to get to me from then. Of course, their range is more limited than if you used a conventional shopping service to order from all over taobao, and the prices are a little more expensive but the convenience and fantastic customer service makes it a great place to pick up an item or two.

Anyway, onto the clothing reviews! 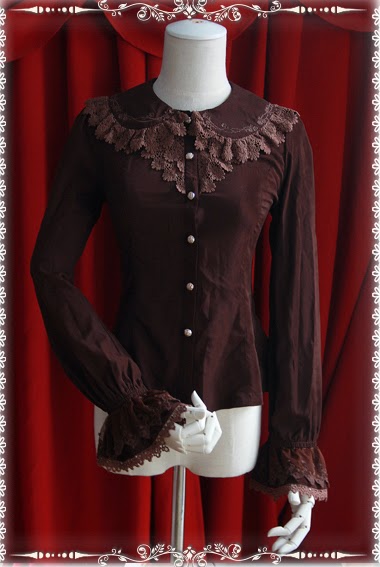 I fell in love with this blouse when it was used in the photos for Infanta's new steampunk skirt. To me it's a perfect lolita blouse: elegant, but not too fussy, still a bit cute, and wearable with a huge range of pieces. This blouse in an XL is listed as fitting a 96cm bust and 80cm waist and it fits me perfectly even though I'm slightly bigger in the bust and smaller in the waist. I'd say it could probably go 2-3cm either way on those measurements due to the shirring at the back. I really am happy with the fit and the quality of materials. It's a really nice blouse for the price.

But. Yes, there is a but. Both the buttons and and the lace were different from what is in the stock photo. The buttons are pearl and gold coloured hearts, which are slightly too large for the buttonholes and are really difficult to get in. The lace is a very dark brown, more a bitter chocolate colour than the warm, reddy brown of the blouse itself. I don't mind the changes too much, except the buttons may need replacing due to the size issues. But it is definitely something to be aware of and possible discuss with Martin if you are ordering via Clobba and definitely want your item to perfectly match the stock photo.

Here are a few photos. I badly photoshopped the first one to try and get the colours right. The stock photo is still probably the most accurate for the main fabric colour, but this is closer. I didn't both adjusting the close-ups as they are jut to show the type of trims used. 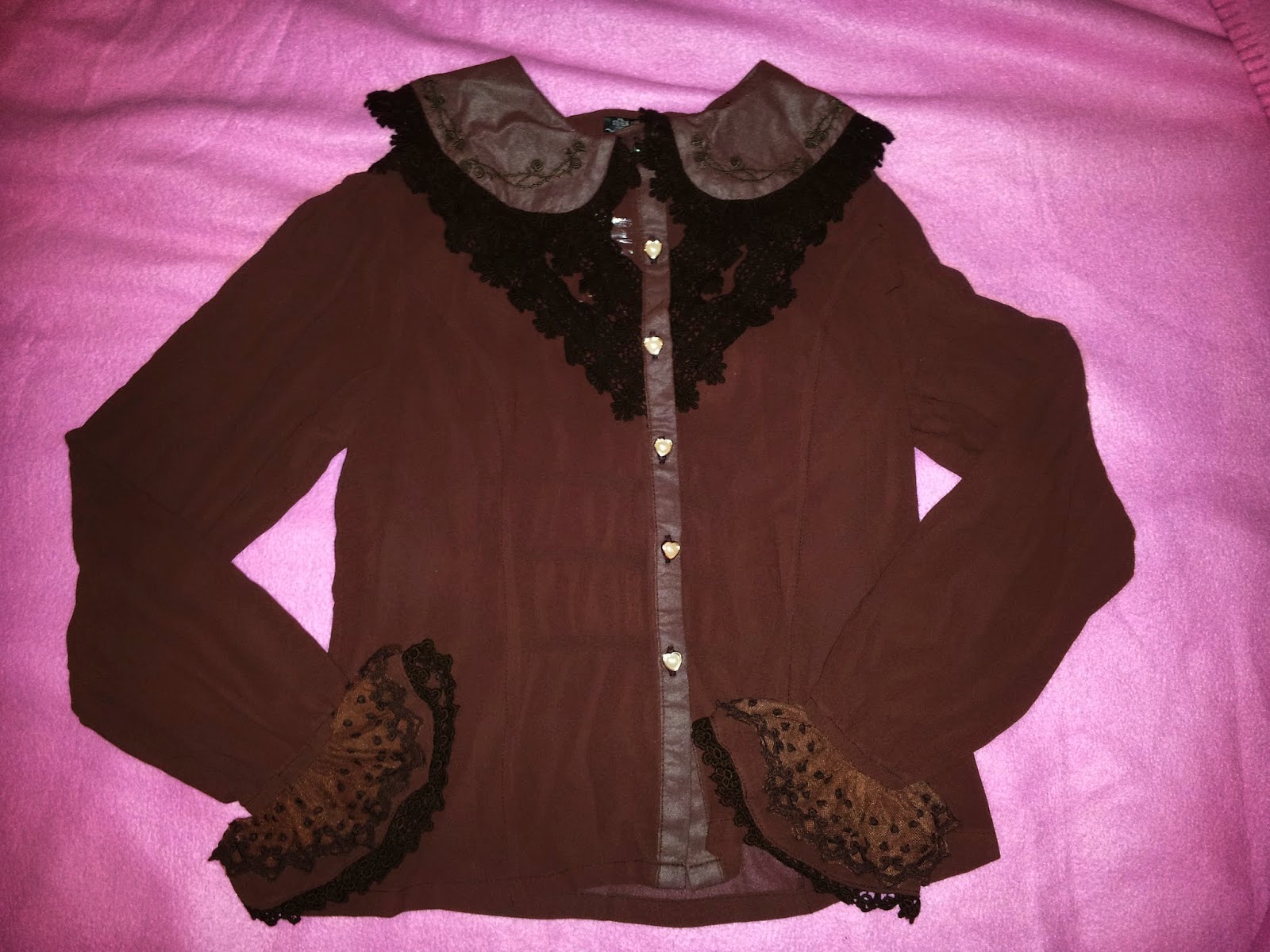 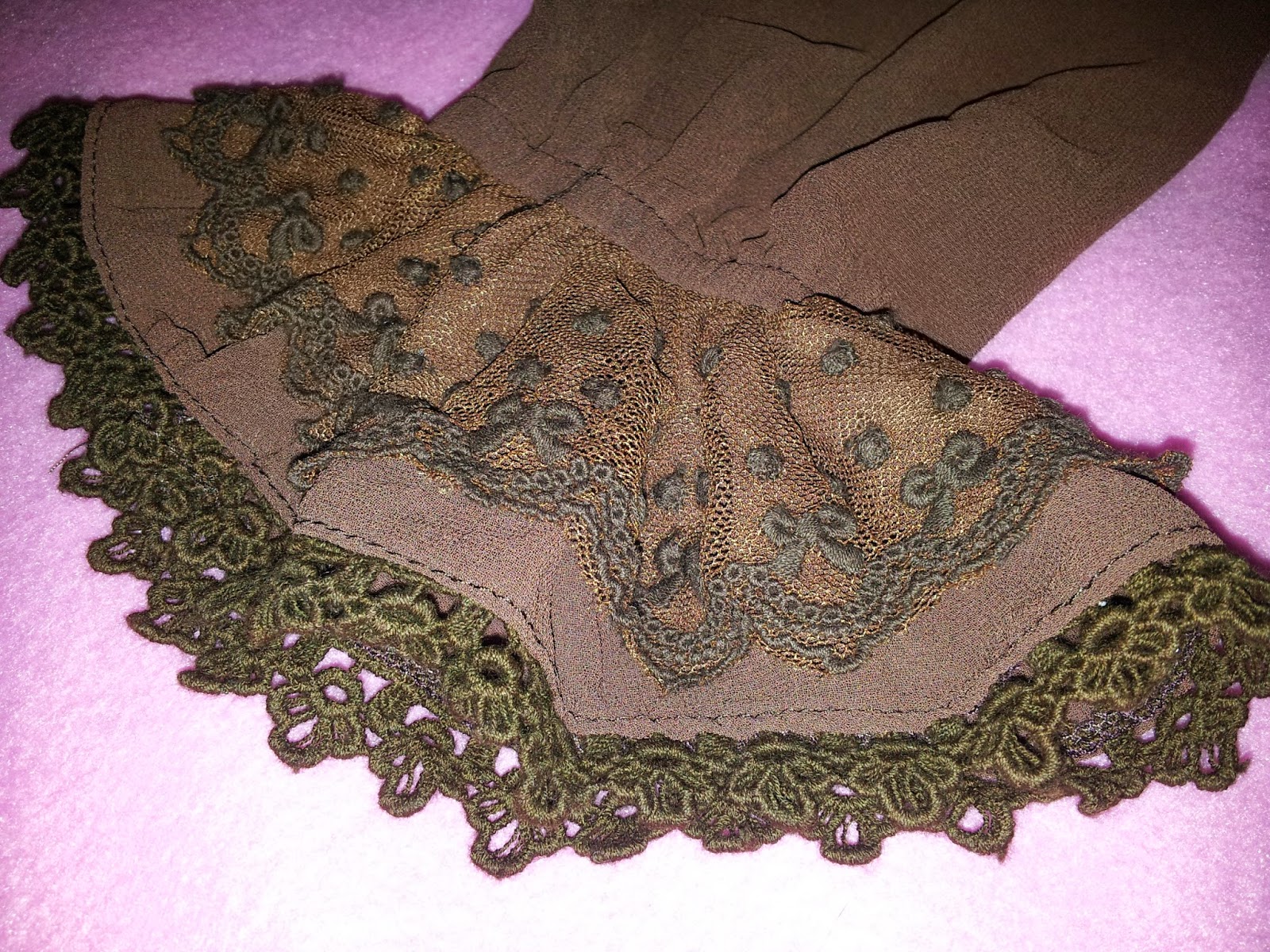 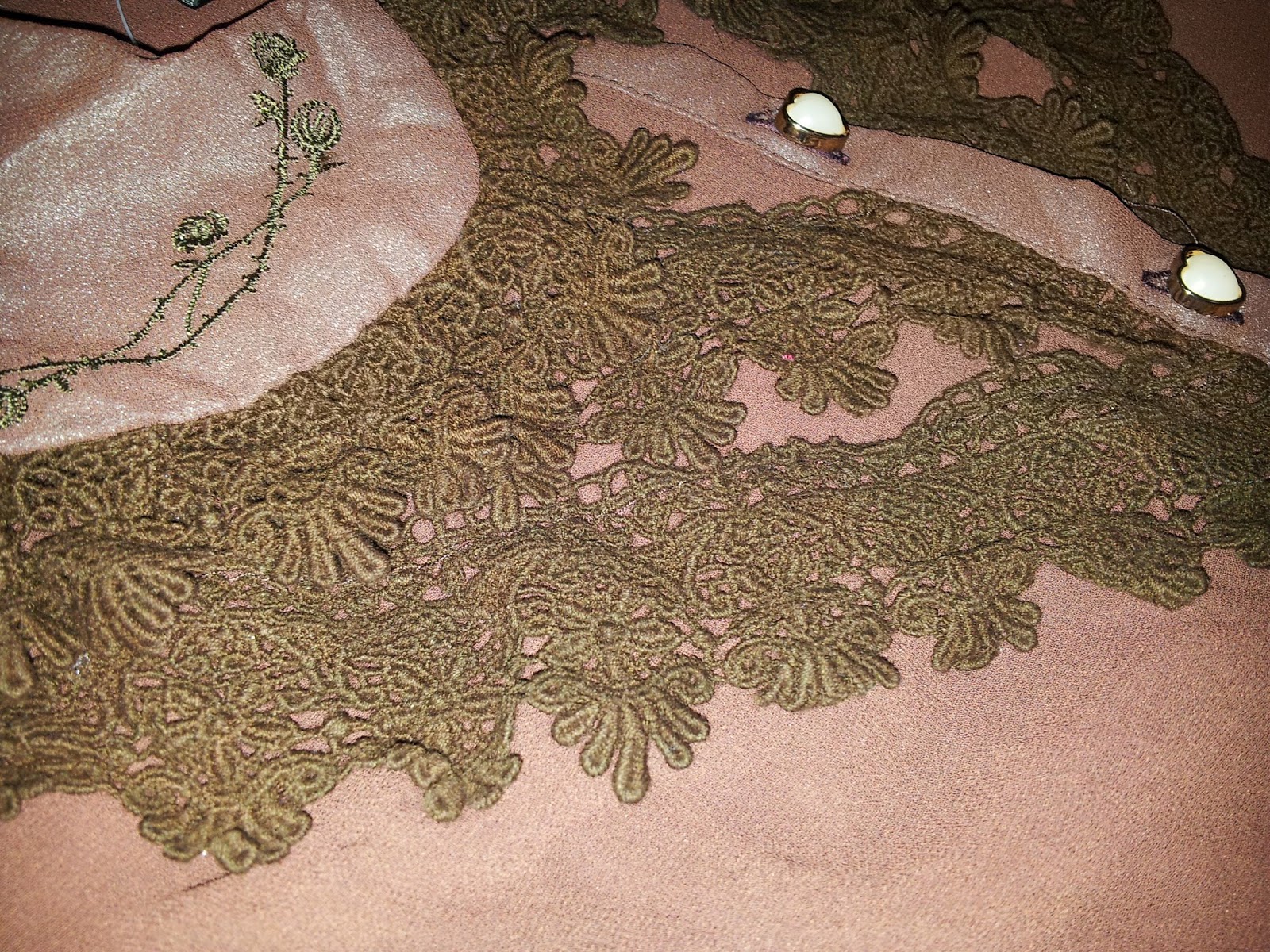 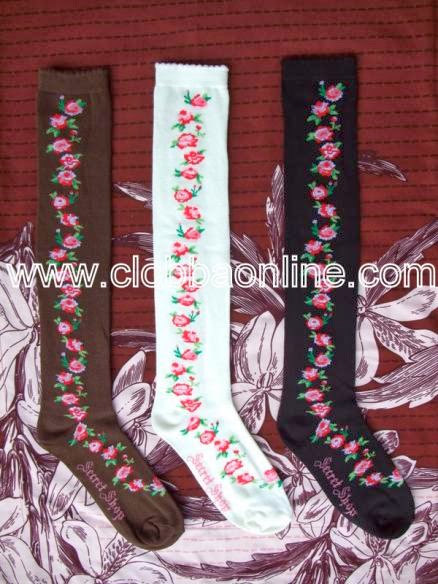 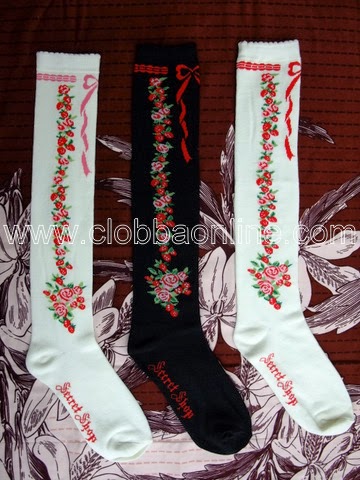 I've been finding recently, as I've started wearing lolita to uni every day, that I don't actually have too much by way of socks and tights that I can comfortably wear around and that actually match most of my clothes. So I decided to rectify that, both in my Bodyline order and here.

There isn't too much to say except that both pairs of socks are very nice. They fit my calves nicely and comfortably, and the pattern doesn't distort much at all. 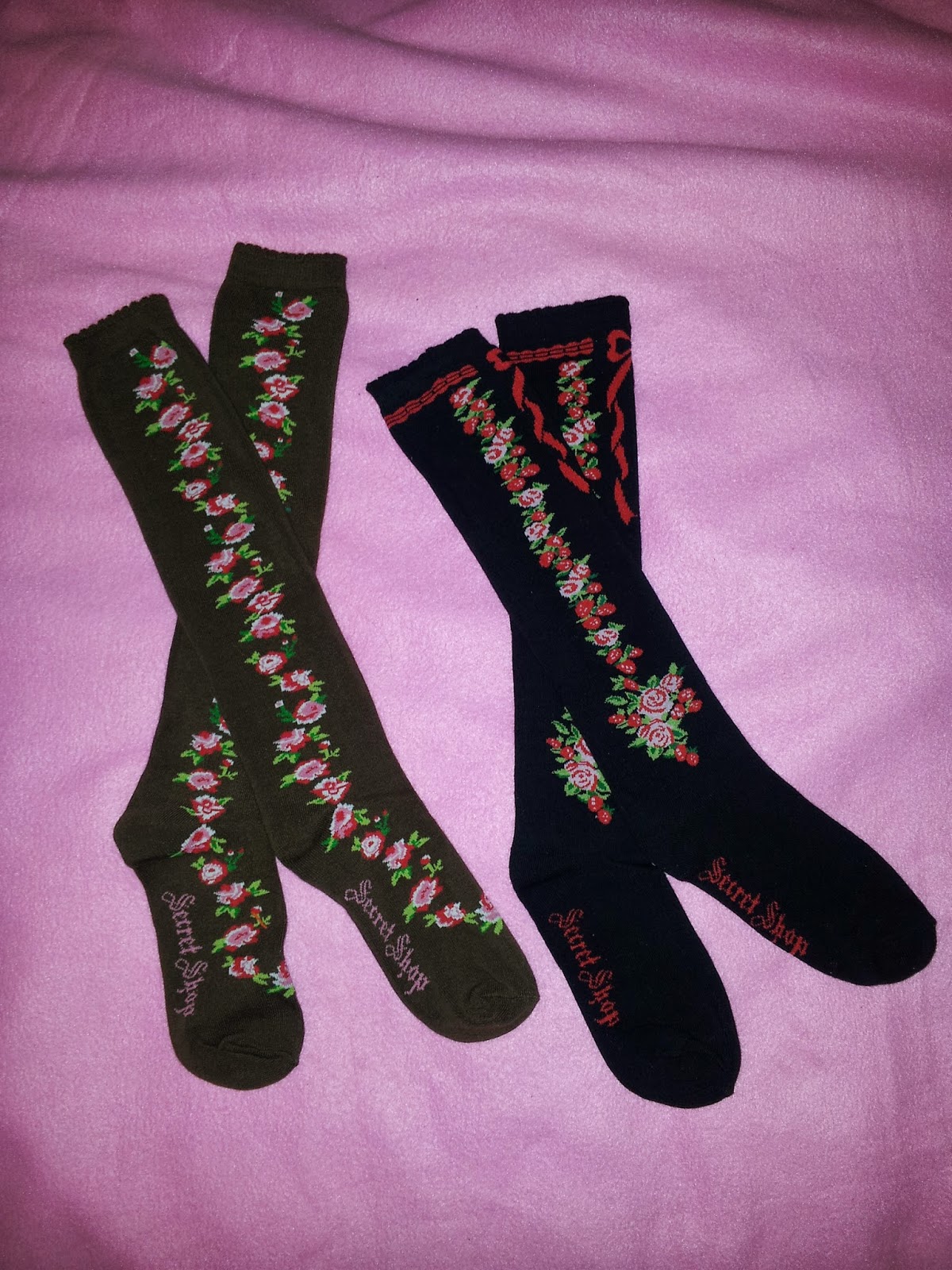