As you may have read last year, things got a bit hectic for me in the latter half of 2018. I've been intending to blog about my wedding trip to New Zealand ever since I came back and in fact, these posts have been sitting in my drafts since I think October. But it took me a while to get around to adding photos and doing a proper proof read so here we are,  six months after the fact. Oh well!

I still wanted to share this awesome experience on my blog, to have as a memory and also to tell you about all the fun things I did (and gush about getting married, of course). It's not lolita content - except for my wedding outfit - but I still hope you enjoy and if not, we'll be back to my usual lolita posting soon enough! I'm going to post these at a more rapid pace than I normally do and I hope you enjoy reading something a little different from me ^__^

We woke up a 4AM to get ready for our 4.45AM airport shuttle pick up. James and I had slept 20 minutes, tops, after finalising our move from our old house at 11PM then packing (which involved a lot of not being able to find things, including James's wedding shoes, which were never found until after we came back). Nat and Luke probably got an hour and a half of sleep, lucky things.

I am not a morning person but surprisingly once I dragged myself out of bed I didn't feel too bad! We were finally going. The move was done and though it has been stressful and we were sick and sore and tired it was over and we were off to get married!

Our shuttle driver pulled up a little early so we all scrambled out with our suitcases and other bags, made sure everything was locked up, and off we went in the pre-dawn darkness. After about ten minutes driving we pulled off into a parking lot where we transferred to another shuttle that already contained a mother and her toddler (who was adorable, and only shrieked a little). Then we were well and truly on our way. Despite running on no sleep James and I were pretty alert and happy and chatted the whole way at the back of the minibus, while Nat and Luke dozed in the seats in front of us.

After another hour and a bit the shuttle pulled up at the airport and we got out, in my case a little nervy and awed. This was my first international trip after all! After double checking we had everything we entered the hall and made our way to the check in screens. For us, it was a fully touchscreen process, which was a bit confusing at that time of morning, but we go through with only a few issues. We sent off our bags, again with some issues but nothing too terrible, and were ready to go!

I'd been informed by one of my work colleagues that a lot of the immigration and customs was automated to go to New Zealand, and so it was. We had to walk up to a turnstile machine, scan our passport, step through the gates and have our faces scanned. Biometrics amaze me...we are totally living in the future. We were then allowed through to the usual security bag and body scan. James got selected for a more thorough body check, and Luke set off the bag scanner because he had foil MTG cards in his backpack!

But then we were through, it was done, and we had lots of time to spend in the airport before boarding our flight. And of course, the most important thing was breakfast. Followed by second breakfast, because I'm a hobbit at heart. 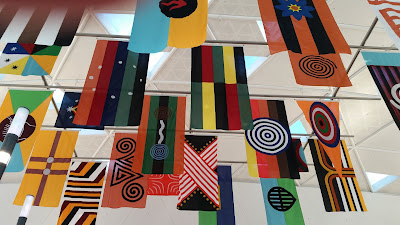 The food court roof was high and decorated with these interesting flags.

A ham and cheese croissant for me to start and a frittata for James, with tea and juice. Then after sitting around our table and being on our phones and tablets like the millennials we are for a while, a quick fruit salad to share (which we never finished, but hey, we at least ate a bit of healthy food!). And then some McDonald's, hash browns for James and some breakfast burger monstrosity meal for me (which was honestly not that great).

But the Maccas was so cool! The kitchen was upstairs and sent orders down by a conveyor thing, I found it so fascinating! I'm a big kid at heart and am pretty easy to amuse, and when I'm tired I'm even more so, so I really enjoyed waiting for our food.

After quite a while of sitting around we decided to split up and meet back up at the gate. Nat wanted to get a foundation match at a make-up store, and James and I needed to get some New Zealand cash. So we went our separate ways, collected some foreign cash, found a toilet, then meandered over to the gate, browsing shops a little on the way as we wanted to see if we could find a new micro SD card for my phone (which we couldn't). At the gate we all met back up and sat together. 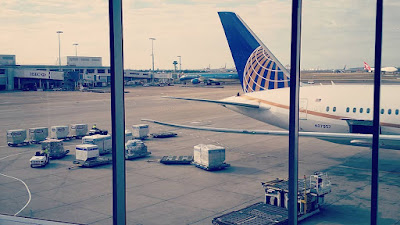 James took this snap on our way to the gate, it was exciting to see all the planes!

I spent a while on the phone with the NRMA to organise travel insurance. We had tried to do it the night before online but their website kept crapping out at a certain point so we hadn't been able to. But after not too long on the phone we got it all sorted. We didn't end up needing it, which was good, but we wouldn't have wanted to travel without it!

Our boarding was delayed a bit but after a while we were able to head down to our plane! It was really exciting heading down the tunnel to get to the plane, which was decorated with all kind of interesting travel imagery. Once on the place we found our seats, decanted the necessary things from our carry on bags, and settled in for the three hour flight.

I was immediately very excited by the little TV in the back of the chair in front of me – it even had some games, including a silly version of Minesweeper, which I played for all of one minute. They had Infinity War in the movie selection, so my entertainment plan was set for the flight. Soon enough, the plane was full and we started heading down the runway.

I’m not a massive fan of flying, as I tend to get a little motion sick and especially suffer on descents. But the take-off was fun and the views over Sydney as we left were pretty cool. As this was my first time travelling overseas James made me take the window seat on both flights, which was really sweet of him. There’s not too much to say about the flight. We were given breakfast, which was tasty. Since James needs to eat gluten free I had specified that in his booking and he received his meal early, and I was jealous! But when I got to pick my meal I got basically the same thing so all was well. 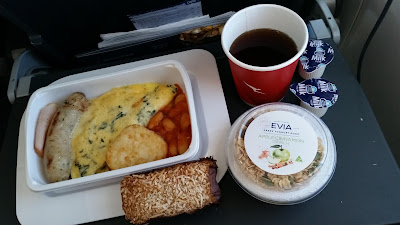 For the duration of the flight I watched some of Infinity War, tried and failed to nap, played a match three game on my phone, and filled in our arrival cards. I was pretty out of it because I was so sick and tired. But when we started to head down I was very awake, because I got a terrible earache, ugh. I had bought some eucalyptus drops from a chemist at the airport because I used to get this problem as a kid and back them sniffing eucalyptus oil helped, but the drops didn’t seem to do anything. So that kind of sucked.

However, despite feeling pretty rotten then descent into Wellington was beautiful. The approach is low over the water, with mountains rising from the island and it was just stunning. 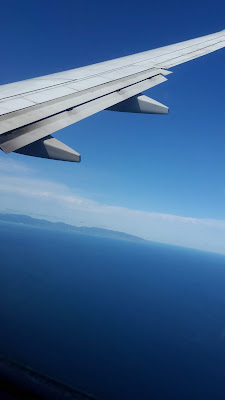 And then we were there! Once the Captain announced we could turn our phones off flight mode my mobile immediately asked me if I wanted to enable international roaming, which I did, and our clocks jumped ahead two hours. The “we’re in a new country” feeling was hitting hard. We were some of the last passengers to disembark, which is fine by me, and soon we set foot on foreign soil. It took us a little time to get past the passport check and then through customs with all our bags but everyone we spoke to was very nice. And there was a cute sniffer dog too. James and I spent a while chatting to a young lady at customs who had amazing tattoos about our upcoming nuptials…one of the things they asked is if your bags contained only your own belongings and we both had to answer “no” since the carry on suitcase I was holding held all our wedding outfits, and James’s had our combined electronics. And of course, once we explained what was in there, we had to gush about the wedding and experience firsthand the friendliness of the Kiwis.

Once we were done with all the official business and were free to go we picked up our rental car, a minivan, and were on our way. As Luke was not confident being the first driver in this new country, and James was in worse shape than I was, it fell to me to be the first driver! Which was moderately terrifying, but I got used to the van and the different road rules soon enough. Unfortunately the Airbnb address we were given didn’t include the suburb and our GPS sent us to the wrong place, so it took us around an hour to get to our Airbnb instead of twenty minutes.

However, already I was in love with the country. Everything was so pretty and the drivers were so nice compared to Aussie drivers! The architecture was so varied. I was losing my voice at this time so while I was driving I kept hoarsely squeaking “look at that fucking insert thing here” be it a particular building, tree, landscape or something else. Kind of funny.

But eventually we made it to the Airbnb, found the lockbox, and let ourselves inside.

This first place we stayed at was in a suburb of Wellington called Island Bay, and was right on the water. The house itself was really nice and the location was superb. However, by this point we were all a little too tired to appreciate it much. We got settled, more or less, then James and I went to get groceries while Nat and Luke ordered in some pizza. Honestly, unfortunately this first night kind of sucked because we were so wrecked. We had done a lot on no sleep while quite sick and neither James or I were feeling good at all. So I went to bed feeling pretty down but knowing that a good night’s sleep would help a lot.
Posted by Roli at 1:34 pm