NZ 2018 Day 8: Shopping in Auckland and dining with a view

It was wonderful to wake up in our hotel and know that the travelling part of the holiday was over. No more big drives, and also no concrete plans until the evening. It was actually funny, no-one wanted to get up and make noise due to not knowing if the other couple was awake, but James had gotten us all hooked on playing a phone game called Empires and Puzzles. We were all in the same association there and can see when players were last active. So James and I lay in bed playing until we saw both Nat and Luke had logged in, and then we could all get up!

Get up we did, and wandered down to breakfast. Hotel breakfasts are totally my favourite thing, and as much as the previous day’s Airbnb misadventures had been stressful, it was really nice to end the trip with a more luxurious stay. And breakfast was really tasty! Lots of good food, and I fell in love with the raw apple juice and probably drank too much of it.

After breakfast we went to the concierge to see if they had any availability open up for that night. Unfortunately they didn’t, but after one of the staff members spent some time on the phone with central bookings we were booked for the night at the Heritage’s sister hotel City Life, again with valet parking, breakfast, and late checkout. Now I have to gush a bit about these hotels, because our experience at both was absolutely lovely. The rooms were nice and very well located, breakfast was yummy, valet parking is a boon and above all the staff were one and all very helpful and very nice. If we ever go back to Auckland (or hey, they have other hotels around the country) we will stay there again. They were also quite reasonably priced for the quality…though given that we had to last minute book rooms for four adults it was a bit pricier than we intended! But yes, the Heritage hotel brand gets my vote and I’d very much recommend staying there.

Since we didn’t have to check out until midday we packed up leisurely, then went downstairs to checkout and get the van back and drove a few block until we reach the City Life! We weren’t able to check in yet, but we were able to leave our bags with the concierge and have a valet take the van for us so we were free to go shopping! James and I had a total “fuck it, it’s our honeymoon” attitude this day and it was so much fun to go on a shopping spree in physical stores. Mostly I shop online so it was so fun to actually browse things.

Our first (unplanned) stop was Peter Alexander. I haven’t had nice pyjamas since I was a kid but now I have some gorgeous pastel things and a fluffy new dressing gown, while James has the cutest Star Wars set. I can also see why people like Peter Alexander stuff so much, my new things are so comfy! And pretty, don’t forget pretty. See, this is what enticed me into the store: 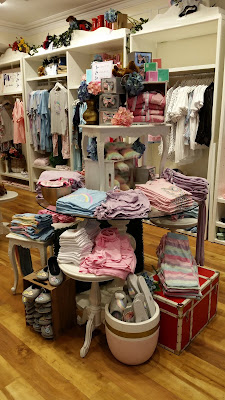 We continued up the street, aiming for the JB HiFi I’d looked up because James wanted to get a DS for the plane flight home, but got distracted by donuts on the way. 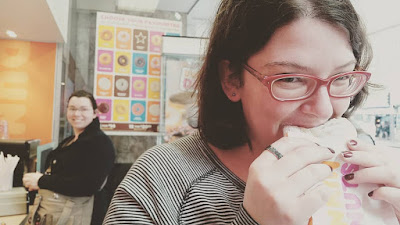 When get to the JB, browsed for quite a while. In the end James walked out with a limited edition Pikachu one, some games, and some Attenborough and Buck Rodgers DVDs, while I bought two original Sailor Moon box sets. We also (way too late, but whatever) got me a new micro SD card for my phone (and I still haven’t installed it). We are such nerds.

We walked a bit further, going the main length of the street, and I got distracted by more food – Japanese style crepes! I had to get one! No polite “hey guys, can we stop for a bit?” just “I’m getting a crepe”. 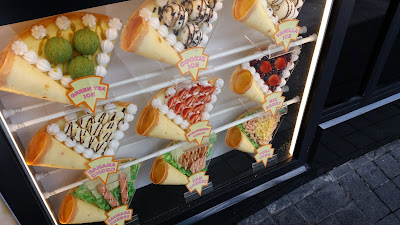 In the end, my crepe wasn’t that good and some of the berries used in it were still frozen, but I enjoyed it regardless. And it made me so happy to randomly find a crepe shop while on holiday.

We had reached what appeared to be the end of the main shopping strip, so we crossed the road and headed back towards the hotel. But we didn’t get far before we detouring into Daiso, where we all picked up some little things. And after that, we didn’t get far until we ducked into Jay Jays and James and I bought lots of things! Jay Jays is my favourite regular fashion store, but lately they seem to be closing down a lot in Australia, so it was great to go in and buy lots of cute and nerdy stuff (I got the best grumpy cat shirt). Last of all, we stopped in at Cue to see if I could perhaps find a nice dress for dinner that night, but had no luck (and everything was really expensive!).

I'm a bit hazy about when exactly some things occurred, but I think we checked in next, and went upstairs to our gorgeous two bedroom suite. I loved the view! 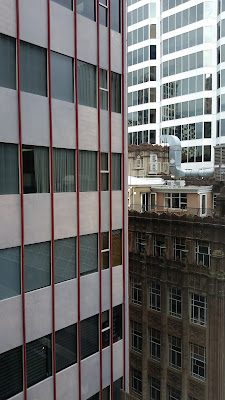 We parted ways briefly then - James wanted to go to the concierge to find a massage place, while the rest of us went out to buy some sushi for lunch. We wandered the opposite way along the street, following Nat who had googled a place, where we bought sushi (the rolls were massive so I bought too much, oops!) and went back to the hotel to eat. James had found a massage place in the next hotel over and had booked himself and me in for the early evening, but it was still just afternoon.

So we went out for more shopping, this time on K Road. This was something that was on my itinerary, but not something I'd put too much thought into. Which I should have, because though according to the internet there are lots of cool places on K Road we didn't see all that many. Though it was immediately evident that though this is their quirky vintage area, it's also the red light district. 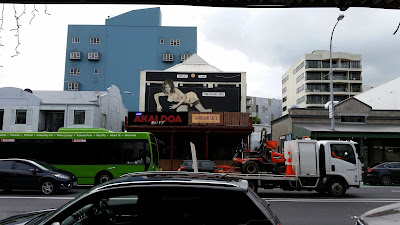 We took a taxi, and the first shop we went into was a secondhand store which had some great pieces, but everything was either overpriced or not my size. In the end, none of us bought anything there. Then we wandered down the road and ended up in an army disposal store, where James was totally in his element! It was a really cool place and I took some photos before I saw the "no pictures" sign. 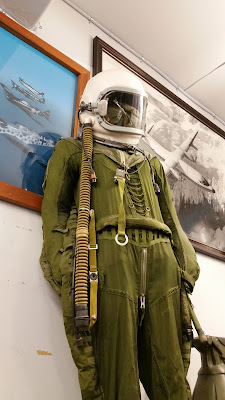 I think the coolest thing James bought here was a pair of ex-Antarctic overalls, perfect for post-apoc costumes! Nat also got herself a used pair of combat boots which were pretty awesome.

When we'd finished up we wandered along the road a bit again before realising we were done, so we went to find a taxi to take us back. This took us a while, as none of the taxis we flagged stopped for us. We passed a bus station, but it was swarming with school kids and collectively we weren't up for that. Eventually Luke (I think) directed us to the nearby YMCA, assuming there'd be a taxi near there. And there was at a neighbouring fancy hotel! But it wasn't reserved or anything so we got back to the CityLife before too long.

James and I went off for our massage, which was quite good (though being horizontal was still making me cough), while the others relaxed. Then we were off to our last "thing" of the whole trip, dinner at the Orbit 360 restaurant at the top of Sky Tower and visiting the Sky City Casino while we were there. I was exhausted, so we walked slowly there, and I snapped some pretty photos of the tower. 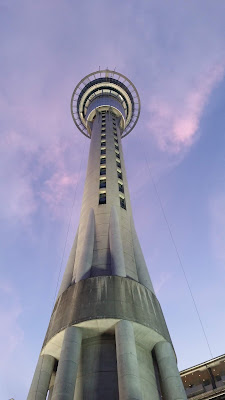 We got a bit lost trying to figure out how to get to the restaurant, but after we asked directions we were fine. We went to the elevator that would take us to the top of the Sky Tower and up we went. The elevator travelled very fast and there was a glass panel where we could see down...little bit freaky! Once we got to the restaurant we were shown to our table and were able to enjoy the view of dusk falling over the city. 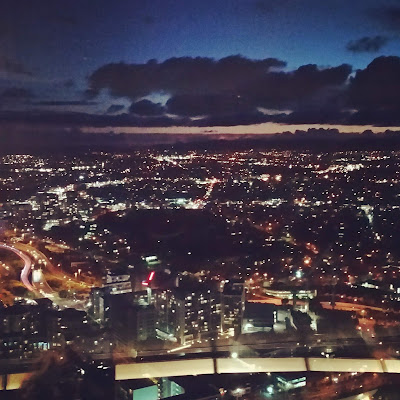 Unfortunately, due to the rotation of the table area I did feel a bit queasy at the start but it passed after a little while. Which was good, because as usual the food was delicious (I discovered Israeli couscous and loved it) and it would have been a shame to have had trouble eating.

I was also very proud that I tried to take a really artsy picture and succeeded. I am really, really blind without my glasses lol so this was a challenge! 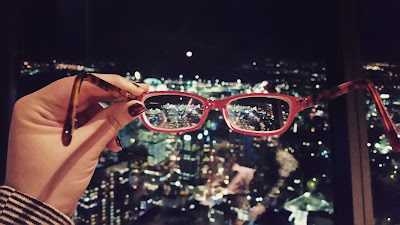 We enjoyed both the view and the food, and got a very sweet surprise with James's desert ^__^ As usual when we were asked why we were there by the waitstaff we gushed about getting married and this was an adorable and unexpected addition to his desert!

With dinner done, we went back down the scary elevator and found ourselves in the gift shop. I had been meaning to buy a few tokens for certain people and got most of that done, which was handy. Then we went on to the Casino! 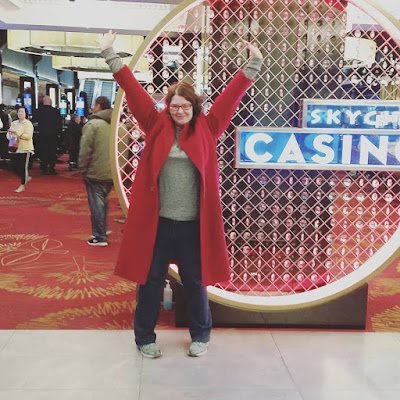 We spent some time on the pokies, which was really fun once James showed me what to do. I don't think any of us, except James, had been into a casino before. Not really my thing, but fun to try once. We briefly looking in at the blackjack tables, but I was tired so we headed back to the hotel.

Once we were back in our rooms is was bedtime for me. The other all watched Coco on the TV, but I just had to crash out, and I don't think I even woke up when James came to bed.
Posted by Roli at 5:23 pm