I may have been away from my computer for a week this month, but I still read all the lolita posts that came across my feed! As usual, here are my favourites from the April ^__^

Coord Catchup: the Japan Edition from Cupcakes and Unicorns

Okay, I'll admit, I'm kind of a sucker for other people's Japan posts even more than ever due to my recent trip. I also always enjoy coordinate roundup posts. So how could I not include this?

Milanoo: Myths And Misconceptions In Lolita from Crimson Reflections

Ah Milanoo, that names takes me back. This was a very interesting read and really made me consider how much has changed in the online lolita world in the time I've been involved in the fashion.

LBC: Where Do You Like To Go Dressed in Lolita Fashion from Teeny Travels

You know something that's kind of annoying? When an LBC topic you'd been upvoting for months gets picked for the week when you're out of the country... Oh well, I can still enjoy reading about it!

This is such a gorgeous photoshoot! And not just any photoshoot, but an adorable triplet shoot! Go take a look, your eyes will thank you. Now I really want to organise a triplet (or more) photoshoot...

I really enjoyed reading this detailed event report. I'm not a massive fan of Mana or Moi Meme Moitie but this still sounds like such an amazing experience!

Tales of the Traveling Poof: April in Hokkaido! Mt. Moiwa, Asahi Breweries, Fushimi Inari, and Akarenga from Sanakanin
Wow, this is the month of everyone posting about Japan travels and I am loving it!

Fancy Paper Dolls, Easter Celebrations from Bonniviwii
This is a nice simple post - Easter coordinates past and present!

To All the Dresses I’ve Loved Before: Part 1 from Pink Strawberry Tea
I really enjoy posts that make me want to do the same thing on my blog, and this totally did. We spend so much time looking forward in lolita that I feel it's nice sometimes to look back instead.

How was your lolita month this April?
Posted by Roli at 9:25 pm 2 comments:

You have to have known this was coming - how could I not go to Tokyo and not visit the lolita shops?

In the end, as well as visiting the stores in Shinjuku's Marui Annex and the Laforet building in Harajuku, we went to the Shinjuku Closet Child once and the Harajuku branch twice. I'd have loved to have visited the Ikebukuro branch as well, and dropped by the Shinjuku Closet Child a second time, but in the end we had exactly zero baggage space left on the way home so I'm glad we didn't!

That intro may make it sound like I bought hardly anything, but that is very much not true! For the purposes of this post I've photographed things together on an aesthetic level, but when I blog about the whole trip that'll have the details of what I bought where an when, just in case any of my readers care about knowing that much. This is also just the lolita items I bought - I got as much general fashion stuff as well, which I'm also insanely happy with.

So, with no further ado, allow me to introduce my newest wardrobe additions! 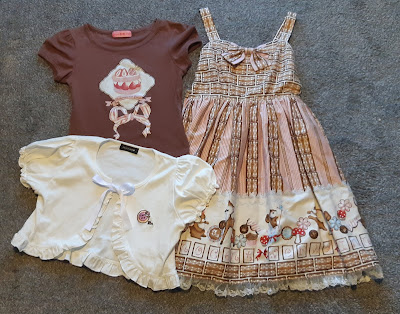 First up, the edible themed items! I was surprised to find this Innocent World JSK in both pink and blue at the Harajuku Closet Child, both new with tags. It took me a while to pick which colour I wanted, but I figured the pink was the safer bet. I'm not 100% sure how much I love the cut on me, but we'll see how I go wearing it. The Angelic Pretty cutsew was super cheap, so I had to have it, and the Peace Now bolero is a bit frivolous, but also cute and cheap so again, I just grabbed it ^__^ 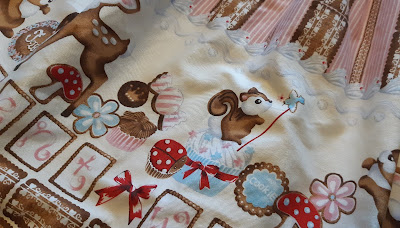 The Icing Cookie print is never one I really paid attention to, but like so many lolita prints, after seeing it in person I'm in love. It's really adorable, but a little more subdued than say an Angelic Pretty print on the same theme. Very excited to start putting together some coordinates with it! 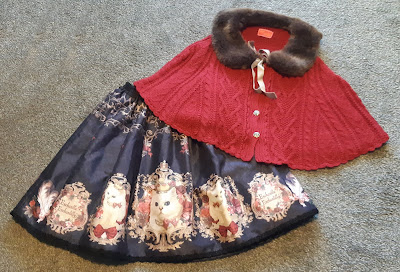 The other main piece I bought was Enchantlic Enchantilly's Queen Cat skirt in black! It's missing the sash ribbon, but I do not care at all. I also grabbed this super cute BTSSB capelet because how utterly Little Red Riding Hood is it? I mean, except for the fact it doesn't actually have a hood... 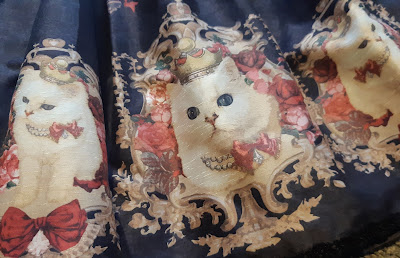 But in all seriousness I'm so over the moon with Queen Cat! I tend not to talk too much about things I like but don't see myself buying, and Queen Cat one of those things. I thought it was an amazing print when it came out, and have admired it every time I've seen it since in all cuts and colours. So when James turned around from browsing the skirts at Closet Child while I was looking at dresses and held this up I just had to get it! It was a bit pricey for a secondhand skirt missing a piece, but hey, I had the husband's seal of approval so I didn't think twice! 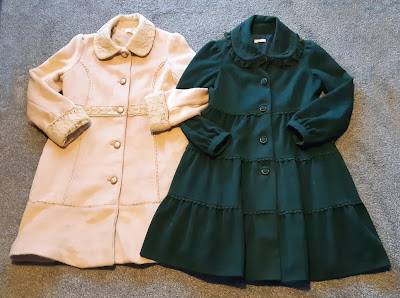 Speaking of James finding me great things he also discovered these two Axes Femme coats on different days in Closet Child Harajuku. They're both a bit small for me now, but they were both around ten dollars. How could I not at that price? The green one in particular I really adore, even though it doesn't match anything I own. 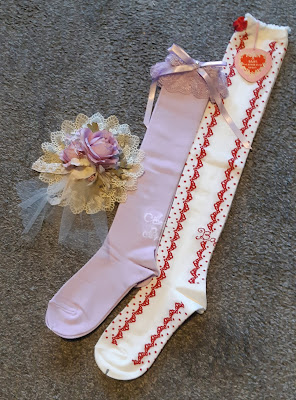 I did also buy a few items new! I really wanted to get some direct from the brand socks, so I visited AP and Baby. Silly me didn't check the length on the lavender socks though, but oh well. Forced versatility in my sock collection! The floral canotier is from Dangerous Nude and to be honest, it was more expensive than I like, and I kind of bought it because the owner was so utterly lovely that I wanted to buy something! All that aside, it's really gorgeous and I like having an opulent classic piece so I'm still happy. 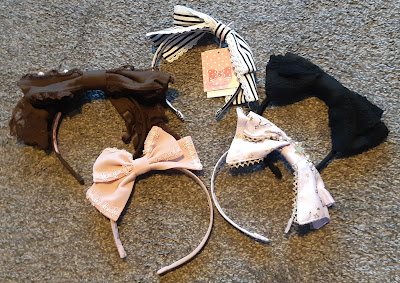 Following the trend of headwear, on our first visit to Shinjuku Closet Child I went a little bit nuts on accessories. All but the top headbow are from that night! And though the top one has tags, it was also from Closet Child, just later on ^__^ I'm particularly happy with the dusty pink and the lavender x gold bows, as they were on my wishlist. 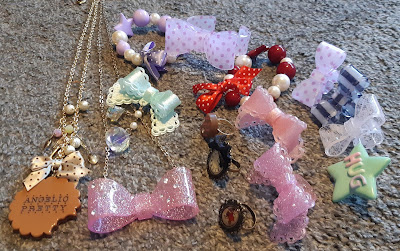 I also bought all of these accessories at the same time, except for the Angelic Pretty necklace. I even already wore the pink necklace in one of my Tokyo coords, and I'm just really happy to have bulked up my jewellery collection with some more loltia specific pieces. 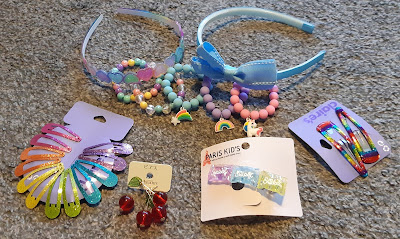 James also found me three Axes Femme skirts for about five dollars each in Closet Child but my photos of them really don't do them justice. They are all varying levels of brown and floral and all a tiny bit small for me at the moment, but I couldn't pass them up. Two will be great for casual classic lolita - one is a damask-y type fabric in a beige/tan and the other is a brown and mustard floral - while the other will be lovely for mori kei or fairy kind of looks.

So there you have it! All my new lolita items direct from Japan! I'm really happy with everything I bough and am so excited to start incorporating everything into my coords ^__^
Posted by Roli at 3:40 pm 6 comments: