Prepare your eyes of a lot of photos.I had to uninstall apps on my phone to make room for all the pictures I took! But I’m getting ahead of myself…

It was a drizzly morning again when we woke up, but a patch of sunshine gifted us with a rainbow. We packed our things up, ate some breakfast, watched cows in the field chase after a person on a tractor who undoubtedly had their breakfast, and got in the van to make our way to Hobbiton! Hobbiton was the thing I was third most excited for on this trip – first was marriage, second was cheetahs! But I’m a massive Lord of the Rings fan (movies only, sorry, I just couldn’t do the books) and love behind the scenes movies stuff in general so I was really keen to see Hobbiton! 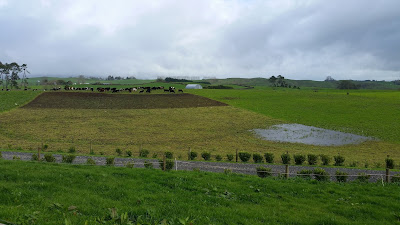 Pictures tell more about our tour of Hobbiton than words do. In one sense, we just walked around and looked at things. In another sense, we were there. I geeked out something hardcore the whole time. It rained for the first half of the tour then fined up by the end, which was nice. I took waaaaay more photos that I'm posting here, but didn't want to get too repetitive! 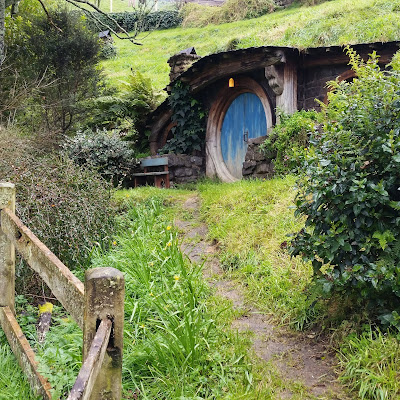 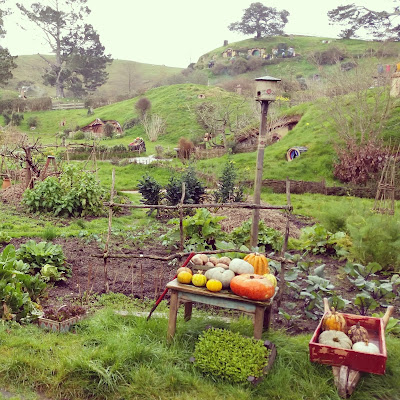 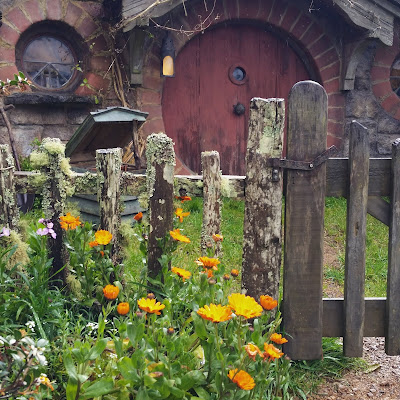 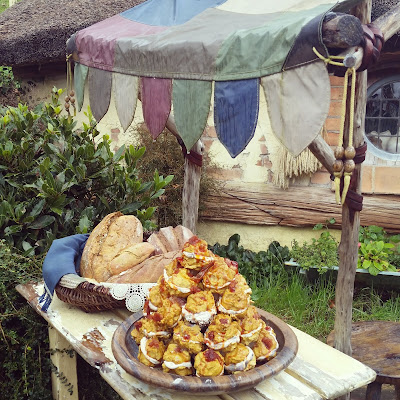 At one point, we all had the opportunity to pose in one hobbit hole door! 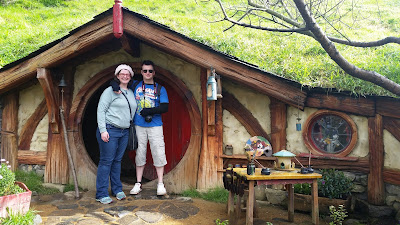 Then, as the final part of the tour, we were off the the Green Dragon for a complimentary exclusive beverage - as the next driver up I had the ginger beer rather than the cider or beers on offer. The Green Dragon was gorgeous! 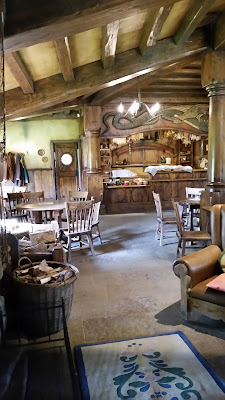 In the green dragon they also had hobbit aprons and jackets to try on, so that's exactly what James and I did ^__^ 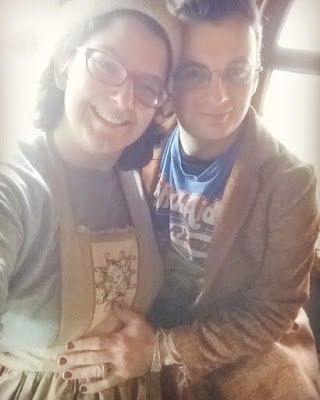 Hobbiton was a great experience, and if we go again I totally want to go either in a Hobbit costume or in lolita! We did think about doing that this time, but decided against it because of the hectic lead-up to our trip and it was the right choice. But next time…oh yes, next time…

Once the tour was over, and we had browsed the gift shop, it was back into the van to head back into town. We browsed the visitor centre, which was built to look like a Hobbit-style house, in the hopes of perhaps finding something to do on our last leg of driving. In the end, we detoured to try and visit some cafe in a cave, but realised it wasn't worthwhile so out only stop on the way to Auckland was at a McDonald's.

Now, we need to backtrack a little before I tell you what happened when we got to Auckland. When we booked our Airbnbs for the trip, everything was fine. The Auckland booking was a bit odd, the host Sean asked to communicate through What’s App, which I don’t have so I declined to do so. Then when our trip started I received a text saying there was a maintenance issue at the apartment and if it wasn’t resolved they’d put us up in two rooms at a four star hotel instead. I was a little apprehensive, but couldn’t do anything, so put it out of my mind until we were in Matamata. Our Auckland host confirmed (the night before our booking!) that there still was an issue and that he’d organised alternate accommodation, and to please come to his office to get keys. I looked up the address of the office, which seemed to be a surf shop, so checked to get the company name. Yep, it was that surf shop. And we weren’t going to get the keys from Sean, but from someone called Yan.

Things were starting to seem pretty dodgy at this point, but we didn’t have much choice in the matter so when we got to Auckland we parked at the surf shop (both the shop and the parking lot did not inspire me with confidence) and went inside. Where we waited for a while until a man came out. He didn’t look like a Yan, so I asked if he was, and he said that Yan was in the office around the back. So he lead us to the back of the shop and into a large space filled with cubicles, with lots of people working on who knows what. A lady stood up to greet us, and I hesitantly asked “We’re here to see Yan?”

“Yan just left to show some people to an apartment,” was the reply! We were baffled. Was that meant to be us? What do we do now?

Fortunately, another lady came over to us with an envelope. “Sae left these for you,” she said. The envelope had the name of a hotel, the Quadrant Hotel, on it along with two rooms numbers and a mobile number. Inside were two room key cards and another parking station card. Nothing else, not instructions or directions or anything. Thank goodness for phone internet! We went back to the van and looked up the Quadrant so the GPS could guide us, and off we went.

Once we reached the Quadrant we were met with our next bit of confusion; where were we supposed to park? There was a public parking station next to the hotel, which our pass gave us access to, and inside was a mix of public paid parking and reserved spaces. There was also an adjacent car park right under the Quadrant, but that gate wouldn’t open. Where were we meant to go? We pulled into a parking space and I tried to call Sean, who didn’t answer, and the number on the envelope as well to the same result. We kept driving down the levels, hoping for some clarification that didn’t come. What did come was some traumatic driving experiences, because the van only barely fit. For what it’s worth we had informed Sean we were driving a minivan, so it was doubly frustrating. Eventually we just parked and got out, ready to check in to the Quadrant and figure it all out

Sean managed to call me back and informed me that we could park anywhere. Because apparently writing that on the envelope was too hard! Anyway, we went up to the Quadrant, hoping that it was all over. I received a call for Sae right as we got to the door, and ended up turning around to see her waiting for us outside the entrance, which was nice. It was good to deal with an actual human being. Unfortunately, English was not her first language and she was not the person we booked with, so things continued to be frustrating for us.

The first thing Sae did was take one of our key cards to the front desk – apparently it didn’t work so she got that sorted out for us. She said that our garage key should have gotten us into the second car park and we went with her to the car park through the hotel, to find out it opened some of the gates to that car park, but not all of them. Whatever. She then told us where to find our rooms so we split up, and each couple went to their room.

And they were so bad. So bad. James and I had a shelf missing in our bathroom, and everything was just cramped and dingy and ugly. Nat and Luke’s room smelled of animal urine (or meth by-products, either one) and had leftover wine and chips from a previous guest. Nat went down later to talk to the front desk, so we found out were hadn’t actually been put up at the hotel, but in privately owned rooms in the building. We all met up immediately and decided – we would not be staying here. It was an unacceptable replacement for the large waterfront apartment we had booked. So we grabbed out our laptops and connected to their wifi long enough to find some alternate accommodation. After some browsing and some calls, we ended up booking in to the Heritage Hotel for the night, though we couldn’t book for the Tuesday night as well. But regardless, we were out of there. We left the keys in the rooms as Sae had instructed, took some photos of how crap everything was, and went on our way.

Also, just in case this turns anyone off using Airbnb I do want to reassure you that the three other bookings we had were fine and all went smoothly. Dodgy people happen but overall I’m still happy with choosing to book accommodation through Airbnb and would happily do so again. Airbnb gave us a complete refund after Sean said he would and then didn’t – it was sorted out with no fuss and lots of helpfulness from the Airbnb staff.

We managed to get the van out of the car park and found the Heritage with some difficultly (it was in a bit of a weird location and had two entrances). We went into the wrong entrance, where told where to go right, pulled up and walked into heaven. The concierge was friendly and sympathetic, a porter helped get our luggage, and a valet came for the van. Compared to the last couple of hours of confusing, frustrating hell, the Heritage was a luxury. And right there on the ground floor was a massage place, where James was able to get their last appointment of the day. Having been the one to deal with all the horrible, stressful carpark driving he deserved it!

So we all rested for a while in our big hotel room while James got his massage. It was a “family room” so technically one queen bed was in the living room and the other was sectioned off by a sliding door, so not the most private, but it was still nice. The Heritage is the kind of hotel I really love, a bit old fashioned, perhaps a bit dated, but very warm and welcoming feeling. It also had a big bathtub, always a plus (and each couple took a bath that evening, so good). Once James joined us we took some time to write and send a firm demand for a refund for the Airbnb to Sean, and then decided to go to a nearby restaurant The Cut at the Rydges. 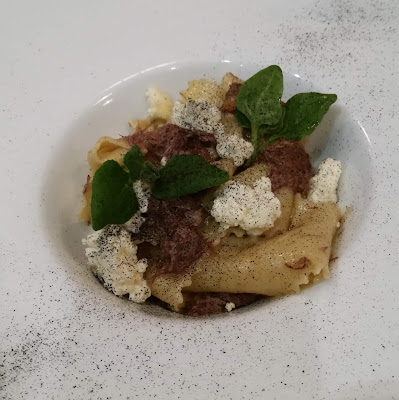 Dinner was amazing! Like, so ridiculously good. I mean, all the food in New Zealand was pretty spectacular, but this was certainly one of the best. The service and atmosphere were also really good. And when dinner was done, we wandered back to our hotel to chill, play games, and watch some Futurama on TV for a while before bed. After the Airbnb turmoil it was nice to curl up in a good cosy bed and go to sleep feeling comfortable and safe.
Posted by Roli at 4:05 pm