I am kind of ideally situated, in that I live halfway between our state's capital city (Sydney) and another large regional city (Newcastle), both of which have a lolita community. However, the Newcastle community is a. quite small and b. had been inactive for years. Until just recently when another member attempted to revive it by hosting a picnic meet.

When the event first got posted I was super excited. I’m not the most social person so going to a smaller meetup in a smaller city appealed to me a lot, so I hit “going” on facebook. After a reschedule due to sickness, the last weekend of July rolled around. On Saturday I made a bunch of sandwiches and tried on my outfit (which I had previously tested as a flat-lay but ended up changing) and on Sunday I was on my way. I was a bit nervy, because socialising and also because I had to catch a train then a bus to get there, and I hadn’t caught a bus since high school! However, I made it fine. 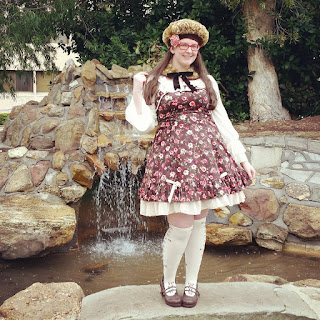 My outfit for the day!

I met up with Rosie, the girl who organised the meet, a little later than the meet was meant to start. However, I was the early one as Kate, the third confirmed attendee (and in the end the only other lolita who joined us), had parking troubles and showed up quite a while later. But it was all good and the three of us had an enjoyable picnic lunch together.

It was a great meet up. Mostly we just talked; the standard introductory stuff (what do you do and what are you into), discussion about lolita itself (of course!), and even a fascinating segue into how imprisoning people for drug usage doesn’t rectify the problem and in fact only makes it worse. We also spent a good bit of time taking photos – Rosie was even good enough to run after some passers-by to get a group shot taken of the three of us, and Kate let me play with her camera, which had a tilt shift setting. And I got to try taking one of the stereotypical “shoe shots”, which made me pretty happy. 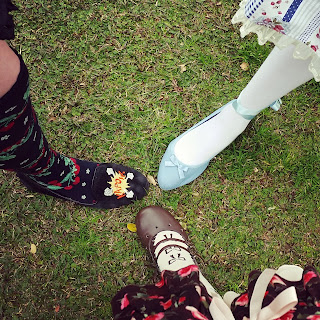 Both girls were lovely (Rosie even caught the same bus with me to get me back to the station okay!) and I really enjoyed getting to go to a small, relaxed meetup. We are all keen for getting the Newcastle community a bit more active, and to be honest I’m more likely to attend those meets than the Sydney community ones, especially because who knows, I may even take a hand in organising a little bit!

I’m really loving the fact that I have actually gotten off my butt and been more active in the lolita community this year! It’s really been stretching me socially as well as giving me more opportunities to actually wear lolita and that’s a good thing ^__^

As a final note, not only was the meet up itself nice we only had positive (or at least neutral) interactions with the public who were enquiring why we were dressed that way, which we willing answered. And the first thing that happened to me when James dropped me at the station to go to the meet was a random lady started a conversation by saying I looked nice! So that all definitely helped it be a good day.
Posted by Roli at 2:09 pm