Two things made this order happen, and it wasn't that I was look for more fawn fur! For an Easter photoshoot I wanted to be a cute lolita bunny. Egg Art was the perfect dress, and I was spending time on the internet searching for the right bunny ears to buy. At the same time, I was browsing Taobao for a blog post about coordinate pricing (coming soon, I promise!) and found the most perfect ears on the Sweet Dreamer/Cutie Creator store!

I wanted to get the ears as soon as possible, given that it was already March at this time and Easter was fast approaching, so I decided to use a re-seller rather than a shopping service, and went with My Lolita Dress. I put my order in on the 4th of March and in the additional requests box asked for it to be processed ASAP. I have no idea if that made any difference whatsoever, and I also have no idea if buying from them was quicker than using a shopping service would have been. It was easier, at least. However, I won't use them again since my package shipped out from Singapore (so the items getting to them from the original seller was probably slower than if I'd used a Chinese SS) and there was nothing to set their service apart from any other shopping service I've used. To be clear, there was nothing bad about buying from them, just nothing good enough to bring me back unless it was necessary or advantageous for some reason.

Anyhow...while I was ordering I thought I'd just have a tiny little browse of what they else was available, since I was already going to be paying shipping...

And I found fawn fur. Specifically, I found a gorgeous reversible cape and some earmuffs from Sweet Dreamer's "Shepherd's Glen" series and I just had to buy them. Had to. No choice. The cape was kinda expensive (though not really for the size of it) so I felt a bit bad, but I also felt very happy!

Anyhow, my order arrived on 26 March, which was in time for Easter, though not as early as I would have liked. However, it still enabled me to do my Easter photoshoot on Good Friday so all's well that ends well! It actually came on the same day as my Madillustration brooches, which gave me a dilemma about which review to post first, but I ordered the brooches way earlier than these things so it was only a very temporary dilemma.

First of all, the ears. Oh my goodness, the ears. They are so cute! And they're a perfect match for Egg Art. You can see the photos of me wearing them for my Easter shoot here and here's a quick photo as well. They're just great. The only downside is that it connects to the hair with a single, large snap clip, which is not really enough to hold it securely. There was also some loose fur when they arrived, but that just brushed off so not a problem. 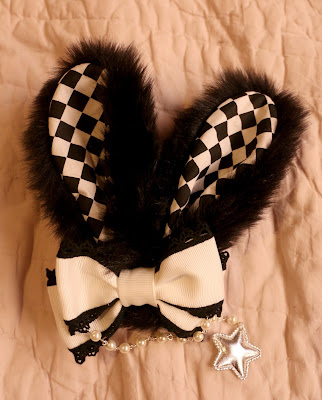 The earmuffs look a bit scrappy at the moment with the fur all mussed from postage, but they're nice. In retrospect, they were a bit too much of a silly purchase and I don't think I'm going to get much use out of them. So I'm a bit disappointed in myself for buying them, but they are cute so it's not so bad. 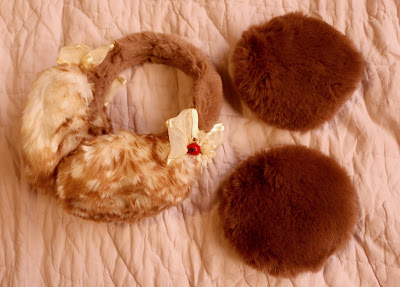 However, what I am actually kind of disappointed in is the cape. See, here's the stock photo. 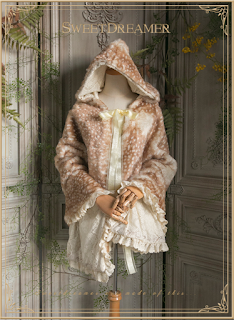 Looks pretty nice, doesn't it? But what it doesn't show is how blocky the final product is. The cape is a big rectangle, with a rectangular hood...and it just didn't look like that was going to be it from the stock photos. 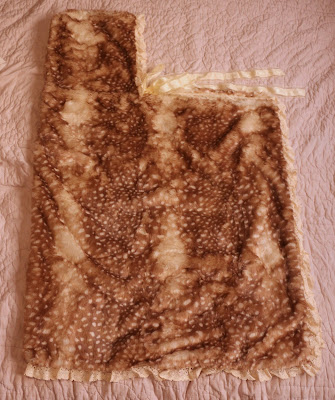 I was expecting something a bit drape-y, a bit softer in shape, a bit more lolita appropriate, but it's not. This is no real fault of either the maker or the reseller, just my expectations, but it's a bummer when your expectations are not met. Though, having said that, there was not a single stock photo was not on the mannequin with its arms up, so they are a little misleading. 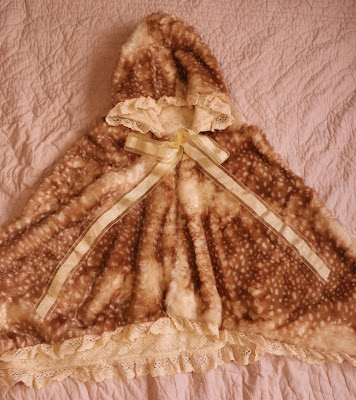 I mean, it is nice enough and there is a lot of fur in there, but I didn't want this style of fawn fur cape, so I'm really bummed to have spent so much money on it, especially when I was trying to watch my spending this year! There are also a few flaws in the fur. I noticed what looks like a orange highlighter mark on the front, and there are sections where the fur is a bit matted. Only tiny bits, but still. Not what I wanted and also slightly damaged. 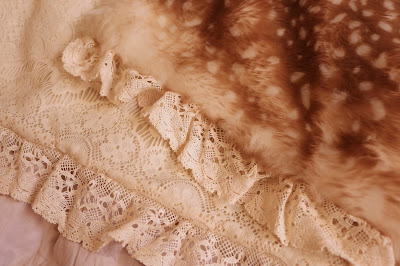 I'm not quite sure what I'm going to do. It is very warm and cuddly, so I may end up using it after all, and if I don't I may take matters into my own hands an turn it into a more typically lolita style capelet.

So overall I'm feeling kind of negative towards this order. The ears are adorable, but the earmuffs were probably a bit of a mistake and the cape is disappointing. Oh well. I guess having a bit of a negative purchasing experience will just help me stick to my "minimal spending" goals a little better for the rest of the year.
Posted by Roli at 11:09 am