As if the universe wanted to force balance to my lolita life, April and March were somewhat lolita-heavy months as opposed to January's two coords and February's zero. Yay for pretty clothes!

First up I (surprise, surprise) wore lolita to go to the movies with James, this time to watch Captain Marvel (which I loved BTW). This was shortly after I'd posted an entry in my Around Your Wardrobe in 30 Coordinates which featured a black, white and lavender coordinate and, well, you can see where I got the inspiration from! 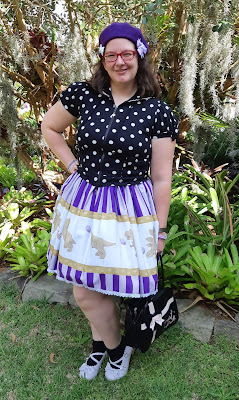 I was really excited to finally wear Jurassic Party out, and I'm super happy that my coordinate challenge sparked the inspiration to wear it in this way. I felt super cute, and received many compliments from James and even one from a random man in the cinema. So it was a happy first outing for this print ^__^

James snapped a lot of cute photos for me so sharing this one too!

Next I wore another casual coord to go with James to get his hair done - back to a brilliant mohawk, this time in blue and pink with a cyber pattern shaved into the side. He pulls off awesome hair so well, it always makes me want to book something equally as wow for me. 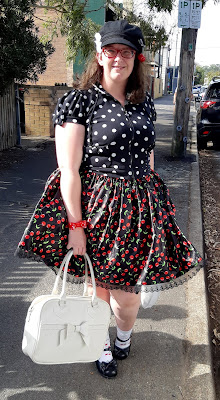 I know, I know, I wore the same cutsew two outfits in a row but that's because it's the most awesome thing ever! Totally need more tops in this style!

After that I intended to wear lolita for the second day of Madman Anime Festival in Sydney since life had plans for me other than finishing day two cosplays for James and I...but I forgot my petticoat! Oh well ^__^

I did, however, bust out a lolita coordinate to take my mother in law out for dinner for her 75th birthday. I really liked this outfit, and she seemed to as well, so I was happy. My shoes died though...the front bows came off as I put them on and the suede started coming away from the heels as the night went on. But they had a good final outfit at least!

And then...the Tokyo coordinates! I had packed three lolita coords, but in the end decided against wearing lolita to Tokyo Disneyland which turned out to be a great decision.

First of all, I wore lolita on our first full day in Japan, which was also the first time we visited Harajuku! Unfortunately it was a rainy day so the photoshoot we intended to also do didn't end up happening, but it was still a great experience to wear lolita while walking down Takeshita Dori for the first time.

However, the W Heart C vintage store had a lovely photo corner, where James obliged in snapped some pics for me ^__^

And then I wore lolita again on Saturday...to Harajuku! On this day we met up with some Aussie friends and one of their Aussie friends to hit up Meiji Jingu and then the backstreets. We were an amazingly colourful bunch, and did photoshoots throughout the day. Check out James's Facebook page to see everything once he's done editing! 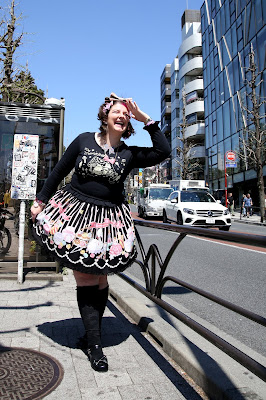 I love the fact the unintentionally I wore a lot of Meta in Japan (my unworn outfit was Baby and AP). Repping my favourite brand y'all! And Patisserie Dream is so cute, I'm just loving that I got to wear it out in such a place and way.

BTW, if you wear lolita to Harajuku on a weekend...prepare to have your photo taken, often without asking. I mean, I wasn't the only interesting one in our group but James and I got asked for photos even when we were temporarily apart form the group so yeah, be prepared! 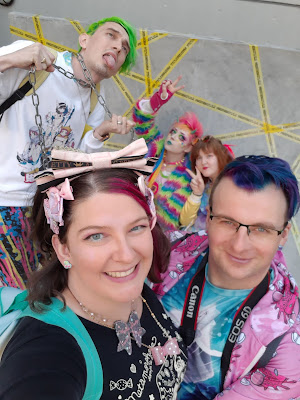 So that was my last two months in loltia coordinates! Things have been a little bit crazy lately, hence my less frequent posting, and I'll be posting a personal update shortly as well. But I see more free time in my future and therefore...more blogging!
Posted by Roli at 12:18 pm