I did a post like this last year and really enjoyed analysing my lolita wearing habits, so I wanted to repeat it this year. Prepare yourself for (as the title says) thoughts, graphs, and ramblings!

In 2018 I wore lolita 27 times - a 58% increase from 2017's 17 times and averaging out to being a little more than twice per month. I'm very pleased with that! I also, like last year, feel like I wore lolita for a good range of occasions - for work all the way up to my own wedding! I went to one more meet in 2018 than 2017 and overall I feel like I kept up the lolita habit without having to force myself to focus on it with specific goals. So yeah, I'm happy!

But who would I be if I didn't put some facts into graphs and ramble on. First little factoid: my most worn main piece in 2018 was my handmade cherry skirt. Unsurprising, as it's super comfy and fits into one of my favourite wardrobe colour schemes and themes. 2017's most worn, Bodyline L417, was a tied second with my black Victorian Maiden skirt at three wears each.

And now for the graphs! First up is outfit distribution by colour. 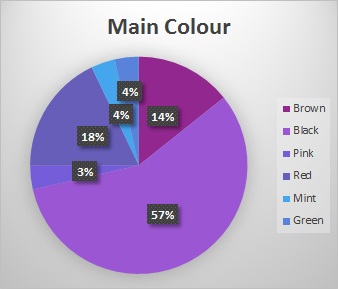 It's no surprise at all that black once again dominated, though slightly less than it did in 2017. What I'm very pleased with, however, is that the rest of the pie chart is divided up between more colours. I even wore more red than brown! That was unexpected ^__^

I continued the trend of wearing a good mix of sweet and classic, with a single outlier, and leaning more towards sweet. I'm actually quite glad that this statistic has remained consistent - I love both sweet and classic and am pleased that I wear both. 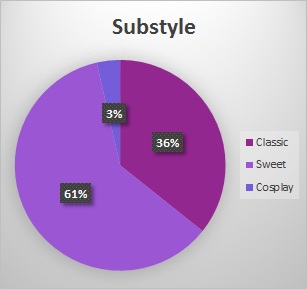 I think that part of the reason I tend towards sweet more than classic is that I'm really getting into wearing lolita more casually, and it's much simpler to do casual sweet than casual classic. I put together a collage of my favourite outfits from the year (excluding my wedding outfit, because gorgeous as that was it's really an outlier) and I think that kind of illustrates what I mean. Casual/simple sweet is what I really like, though dressier classic is also up there. But it's just so easy to put together a cute sweet outfit!

Overall I just like having range in my wardrobe, and I like that I showed more variety in 2018. I also wore lolita for varied reasons, as you can see by this very neatly distributed graph. 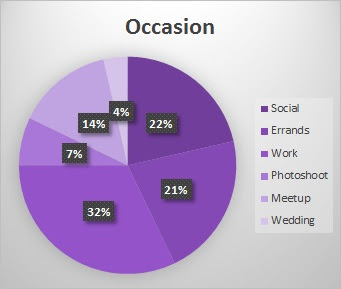 I will actually be quite interested to see how this distribution changes now that I no longer have an office job. I had intended to wear lolita while being all writerly, but I've settled into a routine with exercise scattered throughout the day, so I'll be wearing gym clothes instead. However, I'm going to be going to a lot of conventions this year so I may end up wearing more lolita for that, and since I'm no longer burnt out by said office job I may go to more meets and be more sociable in general. I'm also hoping to get back into modelling more frequently, which will likely involve some lolita looks. It's going to be interesting to see!

So that was my 2018 in lolita! I'll keep posting outfits every couple of months like I have been and while I'm once again not going to set any goals for wearing lolita this year I'm keen to see how it goes ^__^
Posted by Roli at 12:20 pm