2017 outfit summary and a few thoughts on my lolita style

If you've read some of my recent posts you'll know that one of my goals for 2017 (and indeed an ongoing goal from now onwards) was to wear lolita more often. I can safely say I achieved this goal, and am optimistic about continuing to do so. And, having a years worth of recent outfits to look back on, I wanted to do a little evaluation of what I wore and what that tells me about my own style.

I wore lolita 17 times in 2017 - isn't that just perfect? My most popular dress was my old stalwart Bodyline L417, which I wore four times, followed by newcomer Berry Stripe by Metamorphose which I wore three times. Overall, I wore ten of my main pieces over the year. And, as a side note, in those 17 outfits I wore a beret for 7 of them ^__^ 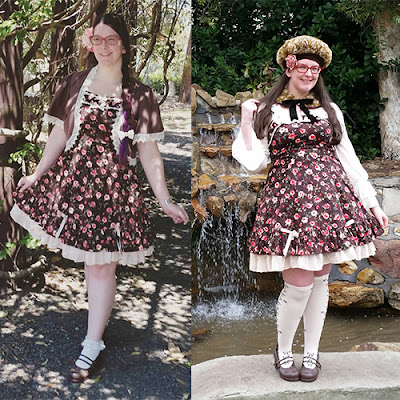 Two different looks with L417...with and without a beret.

What's funny is that in wearing lolita more I'm coming to realise that I am perhaps more into sweet than I am into classic. I prefer to be cute over elegant, if I must make the choice, and I really do like wearing black! I keep trying to move away from black, because I really do love bright colours, but I keep coming back to wearing black. At least I tend to wear black with a colour, generally pink or red. 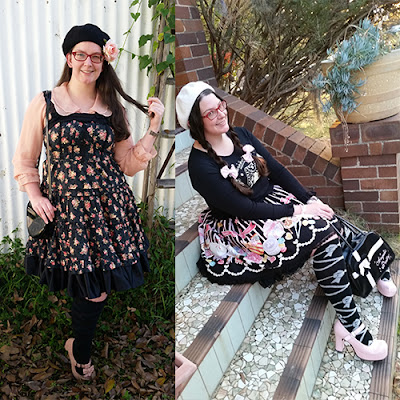 With my mighty robot powers, I can like two things!

See, I think I love classic for when I'm dressing up and being a proper lolita. But when I'm just Roli wearing a poofy skirt to do Roli stuff in, sweet is much more me. That's an interesting discovery. Thinking of that, and because I'm me, I put together some pie charts illustrating the range (or lack thereof) in my 2017 outfits. 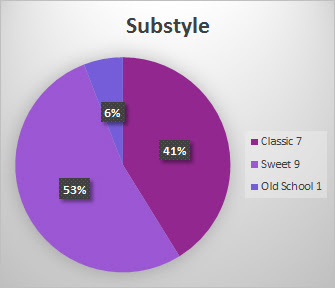 First of all, outfits by substyle. Honestly I did not think I wore sweet quite so much! I suppose it's because my style is quite simple, and my colour palettes tend to be based around black or brown, so my coordinates don't really fit the typical mental image one holds of a sweet lolita. 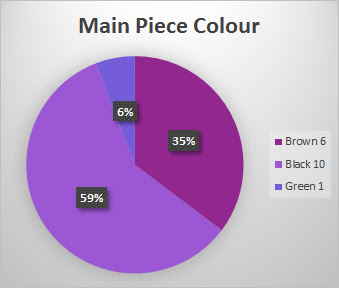 And, speaking of wearing a lot of brown and black...I didn't know I basically only wore brown or black until I analysed things! Of course, prints have multiple colours so it's not like I spent my year in monochrome, but I didn't realise that those two colours had such dominance in my outfit choices. 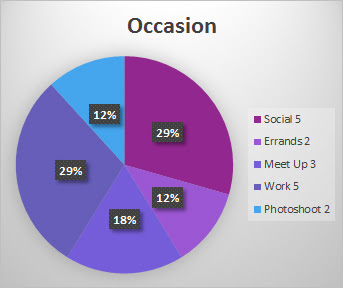 Last of all I wanted to take a quick look at where and when I wore lolita. Once again, the data surprised me as I was not expecting work outfits to be such a big part of this! 29% is quite a chunk of the total. But I like that overall I wore lolita in a range of circumstances throughout the year; that shows me that I really did achieve my goal of wearing it more across the board quite well.

I mean, all of this analysis won't really change anything. I'm still going to wear lolita exactly how and when I feel like it. However if these trends continue, particularly in terms of substyle, it may mean that as time goes on I may shape how my wardrobe develops to better reflect how I actually wear lolita. But that's a thought for later on, perhaps after another year of wearing the fashion with a degree of regularity.

For now, I'll end this post with another comparison of how I've worn a main piece differently at the star and the end of the year, this time Rococo Soul's Jam Paradise. 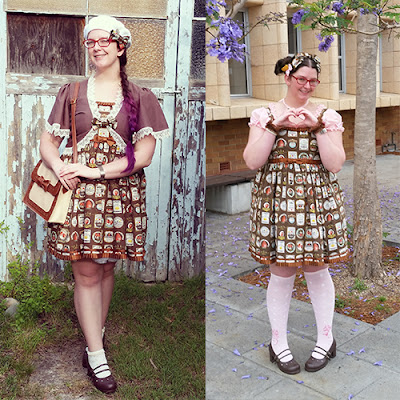 Does anything ever surprise you about how you wear lolita as opposed to how you think you do?
Posted by Roli at 3:11 pm