Would you believe me if I said that I actually had a really, massively hard time coming up with an outfit for this prompt? Honest to goodness, I really struggled hard. Until suddenly - it hit me.

The reason it took ages for an idea to form is that for this challenge I've really tried hard not to repeat main pieces. But I decided to throw that self-imposed limitation out the window because I loved this concept, and besides, isn't it kind of cool to do the follow and break the rule prompts with the same piece? 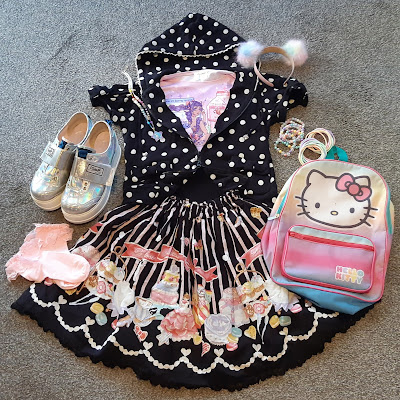 So the basic idea was to use this crop to from Pastelaxy in place of a blouse, and generally go with a trendy black-and-pastel street fashion vibe. I'm actually not even sure what to call this aesthetic, but I really like how it blends with lolita. 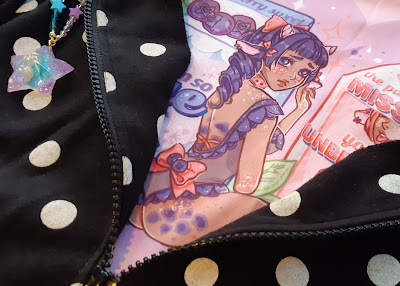 Adding the Angelic Pretty parka over the top of the crop top kept it from being too exposed -  not having something over the top to my mind would have just made it an outfit with a lolita skirt, not a boundary pushing lolita coord. But I enjoy the fact that the slightly risque artwork is still on display and once again pushes that line. It's super cute and colourful (which is totally lolita!) but also a bit saucy. 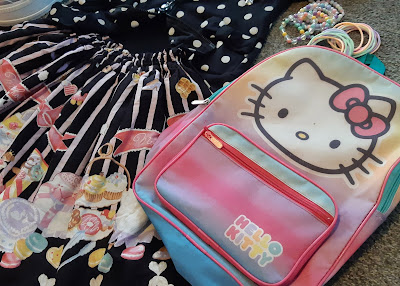 With all other aspects of the outfit, I just ran with items that suited the look without worrying about how properly lolita they were. Hence my Hello Kitty backpack instead of a purse! 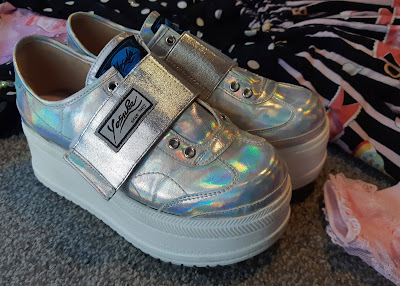 And also hence the shoe choice! Honestly I love these shoes (bought in Harajuku ^__^) and while they're 10/10 not lolita, they go well in this coord. I made them a little more lolita-esque by adding ruffly pink ankle socks to soften the edges, so to speak. Though I'll be honest - if I were actually to wear this I think I'd layer some wide black fishnets underneath because somehow that just really speaks to me. 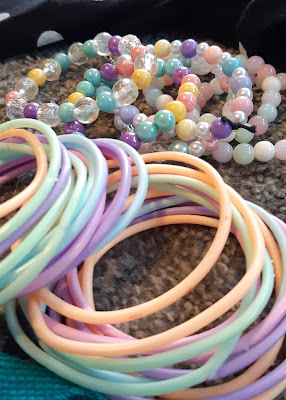 For the rest of my accessories I just did my favourite thing - lots of bracelets and my pastel jelly bands! I also used a cute rainbow star necklace, because rainbows, and topped the look off with a fluffy pom pom headband James found for me a while back.

What I find interesting with this look in the end is that in a sense I actually did tick all the rules in terms of modesty (except for the crop top, lol), structure, colour balance and that sort of thing. It's just that the style of certain items is not lolita. I don't really have a conclusion following that statement but all in all this was a really fun outfit to put together and when I'm at a point where I'm comfortably in a crop top I would legit wear something like this.
Posted by Roli at 4:48 pm