Ahem. Apparently I went through all of May without wearing lolita once! I just…didn’t get around to it at all. Oh well, these things happen, though in retrospect it makes me feel rather odd that for the first time in ages I simply haven’t worn lolita for an entire calendar month.


And then, for the first week of June the trend continued! There were just no lolita opportunities...and the weather was very cold. But then one day, James and I ended up going on a spontaneous dinner date (which we sorely needed and hadn't realised) so I took the opportunity to frill up for it!

Food was yummy and it was great to have a date night! We also ended up going to the arcade in the shopping centre the restaurant is in and I got to show James such gems as the whack-a-crab game that I spent my late teens playing too much of ^__^ 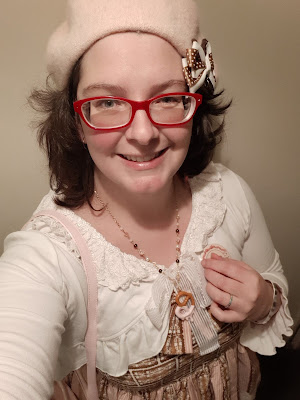 Bonus selfie to show off my necklace and (kinda) badge ^__^

I had also intended to wear a steampunk lolita outfit to the Friday of Sydney Supanova at the end of June but ran out of time to get it figured out and packed. Hashtag sad.

Aaaaand that was that. It feels really weird to be posting this with only one outfit over two months but oh well. I like to be consistent with my posting schedule even if what I wear is anything but. I think things are calming down a little bit now in my life, so hopefully that means more opportunities for lolita in the next two months ^__^
Posted by Roli at 1:44 pm