The first part of September swept by in a bit of a blur. After we got back from New Zealand we had a bit of settling in to do, and it wasn't until towards the end of the month that I actually got my lolita wardrobe organised and properly accessible. But when I did...I was back!

Literally the day that I reorganised my clothing I wore lolita for the first time in what felt like forever. I called James over to look at how prettily I'd arranged my racks, and said "hey, would you care if I wore lolita while assisting on your photoshoot this afternoon?" (because it's not the most practical of clothing to move lights and furniture around in, so I like to be considerate and check) and his gratifying reply was "I insist that you do!"

I was so ridiculously happy to be wearing lolita again. I hadn't realised how much I'd missed it, and how the lack of it was just one more factor in me feeling not-quite-settled in our new house. It was such an instant mood boost to wear something cute and fluffy again! I also got lots of compliments (including from the cashier with cute round glasses at the chemist we ducked into before the shoot) and James and I went out with the friends we were shooting with for a drink afterwards. All in all a great day and an outfit that I really enjoyed.

Also click here if you want to see what we shot that day, since it's quite a contrast to how I looked! It's Facebook-friendly but not quite safe for work, FYI.

And then, just like the start of September the start of October vanished into the abyss...because I got sick. Again. Bronchitis followed by a lung infection this time. Sigh. I took six days off work in a row, I was that sick. Grateful I could do that (and not have to do anything like move house or travel internationally) but I was so frustrated to be sick again. I was the sickest I've been since I met James to be honest, and it sucked.

But after getting my birthday haul in I decided I had to wear one of my new dresses before my birthday month ended, so in mid-October I once again got dressed up (in Teddy Chocolatier this time) to help out on another photoshoot. I ended up sweating horribly for part of the day, then getting rained on but hey, I looked cute!

Last of all I wore a lolita Hufflepuff outfit for Halloween at work! I felt very cute and got many compliments, even from strangers on the way to the train ^__^ 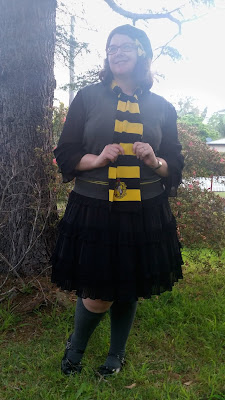 So I didn't wear lolita that much over the past two months, but that's okay. I enjoyed it when I did wear it, and I feel like I'm starting to get a bit more...I don't know...personal style? I'm just feeling more and more comfortable in lolita, and feel more "me" in it. Which is awesome and leaves me feeling pretty good about it all ^__^
Posted by Roli at 3:18 pm