When I got up to this prompt in the challenge I started inwardly cursing myself. I don't do gothic! Why did I include this?

I mean, I included it because I really wanted Around Your Wardrobe in 30 Coordinates to be about fully stretching the options of your lolita collection. And it served its purpose because much as I did struggle with this, I think I pulled together a passable gothic lolita outfit. 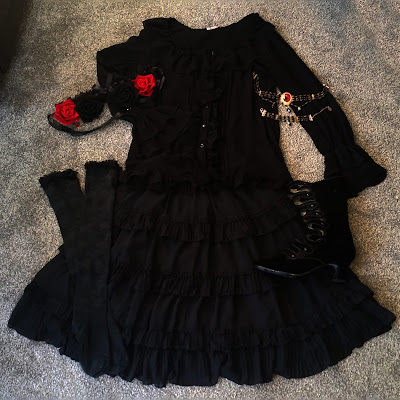 First of all...apologies for the photo quality! I fixed what I could in photoshop but photographing all black indoors is a challenge. Also, never again will I do a flatlay where the main pieces are both chiffon because it was nigh impossible to make they lie nicely flat! 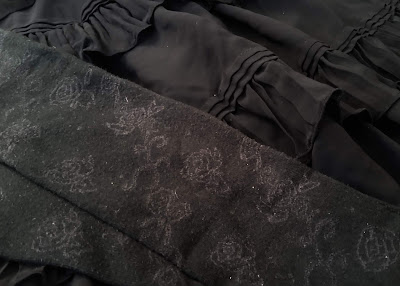 Ahem. I also have three further comments to make. I would probably use some lace tights (or perhaps even fishnets, actually yes, most likely fishnets) if wearing this but they look awful in flatlay form so I included my most appropriate OTKS instead. I also could not find my black handbag, which isn't particularly gothic anyway! Oh well...it's still as gothic as I can go! And lastly...that's glitter on the socks, not dirt...though I have no idea how they got glittery! 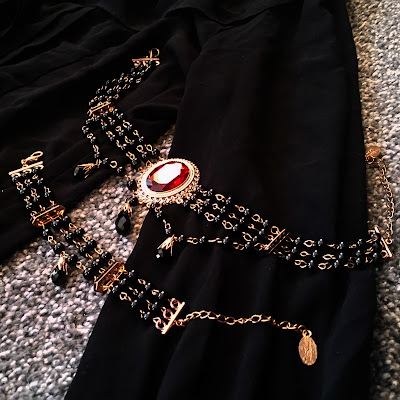 Something I did love in this outfit was using my Rogue Aerie jewellery. They're absolutely perfect for gothic looks, nice and opulent. I also like the idea of gothic looks that don't rely on overt symbolism to define them as gothic, so I preferred using these pieces rather than nabbing a cross necklace from our model wardrobe. 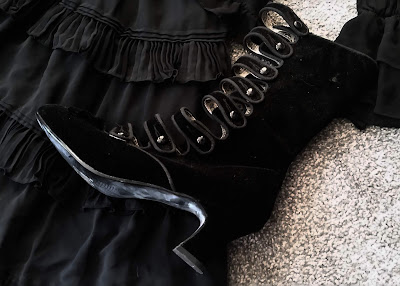 I also got a kick (hurr hurr) out of pulling out my Demonia velvet boots for this look. I adore these boots, though I still don't think I've worn them at all! But they add a wonderful Victorian flair to any look and I think they're a truly beautiful footwear option. 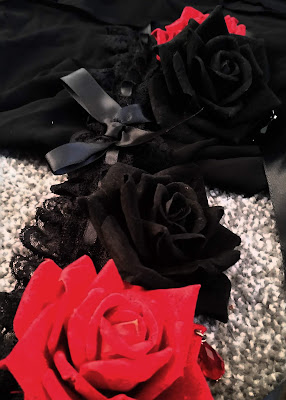 Last of all, to tie in with the jewellery I used both red and black flowers along with a rectangle headdress for the hair - a bit oldschool, which to my mind suits the gothic vibe.

I mean, as I often say, I don't think I ever really do gothic all that well. But as much as a struggled with this, it was fun to see how much of a gothic lolita look I could put together from my lolita wardrobe.
Posted by Roli at 10:58 am

Email ThisBlogThis!Share to TwitterShare to FacebookShare to Pinterest
Labels: around your wardrobe in 30 coordinates, lolita, outfit post, victorian maiden