Lolita Blog Carnival: What makes your dream dress so special?

Dream dresses are such a quintessential lolita thing, but I must confess I've never really had any. There's a lot of things I love, but I've never really gone all out and tried to hunt something down, nor have I ever been willing to spend over what I consider a fair price on an item.

However lately I've come to realise there are two dress in particular that I really would like to get my hands on. I still wouldn't be willing to drop too much cash on them, nor would I devote lots of time scouring secondhand sales for them, but I do still consider them dream dresses. So this is an interesting topic for me because I've never put too much thought into why these dresses in particular really appeal to me.

I first fell in love with the Baby dress when I saw it in Chocolate Maiden's 2016 wardrobe post. It comes from what is probably my favourite lolita era (lates 200s to early 2010s) and is delightfully simple, yet still quite bold. That's the main thing I like about it, I think. There's a lot going on in the print, but the colour palette is limited and the cut is simple so it's not overwhelming. Being fully shirred it's comfortable, and both the cut and the colours work very well with my wardrobe. It also could pass as being retro or rockabilly inspired, so it would be a good one for wearing lolita while not being quite so unusual looking to members of the public. Mostly though, something about this print just speaks to me and I'd love to own any cut of it in this colourway. 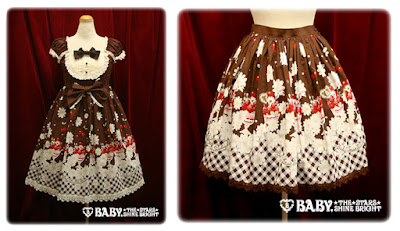 As for the Meta JSK, well, you know me and florals. It's my thing! Being another fully shirred dress again it's a comfy and easy to wear piece. But the thing that mostly draws me to this JSK, in either of the green or the off-white colourway is that though it works well with my wardrobe it also brings in something new. I used to have a green gingham-and-floral Bodyline OP that never sat quite right, so I got rid of it. But I've missed it ever since and loved how fresh and springlike the light green was. So in a sense, this is my upgraded dream dress of that OP. I like the green a little more than the offwhite but either one would fulfil my spring green desires. 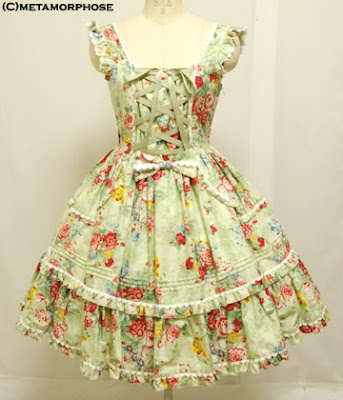 Meta also released a similar JSK in the same year (2014), the Flower Bouquet Pin-Tuck Frill Pinafore JSK, which I also like in the green colourway, but not quite as much. As I say, this dream dress of mine is less of a love for the exact dress (though I certainly do love it for itself too!) but for the things that is offers.


I mean, like I said right at the start, I'm not really a "dream dress" person so in a sense this is more of a ramble about two dresses I currently really like (but don't own) and why but still, it was an interesting thing to think about!


Read more from other bloggers:
Cupcake Kamisama
The Bloody Tea Party
In Love With a Dream

PS In a wonder of coincidence I actually bought the Rose Stripe Shirring Pinafore JSK in green after I had written up this post, so consider that a dream dress acquired!
Posted by Roli at 1:59 pm