Oh capsule wardrobes, how I have missed photoshopping you. In a stroke of good timing, just as I'm getting active in blogging again there's a capsule wardrobe thread on CGL. And of course, I am so there.

There was one person in the thread who was asking about capsule wardrobe principles, for lack of a better word, so naturally I waxed lyrical about that. Then I offered to make them an example capsule based on their style interests, which turned out to be classic lolita with a country vibe. I really enjoyed what I came up with, but did have a few thoughts about it's versatility which I'll go over as well, because it was very interesting to use this wardrobe as a teaching tool, pretentious as that sounds. 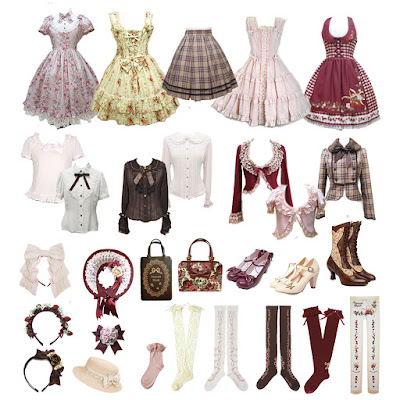 I really like this wardrobe, I have to say (even with the few flaws that I'll go into at the end after showing example outfits), and I enjoyed incorporating the country vibe, which isn't something I usually do. The green JSK is actually a wishlist piece of mine as well so that was fun to include! 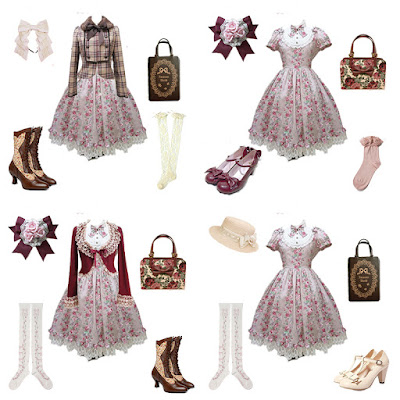 I don't have much to say about the outfits with the floral OP, they're nice but not particularly noteworthy. Which is fine! This OP would probably be the everyday workhorse of the wardrobe since it's such a gorgeous piece on its own. 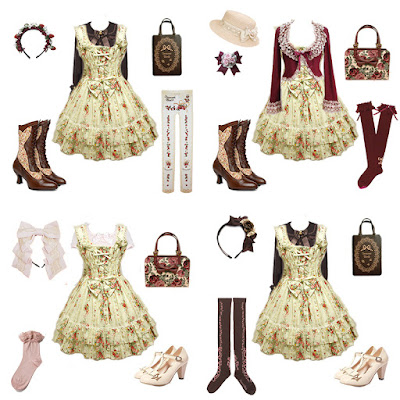 This floral Meta JSK is also a very versatile and easy to wear piece. Despite not being wholly in the ivory/brown/pink/wine colour palette of all the other pieces, it works very nicely with each of them. And working with it for this wardrobe only made me want it more! 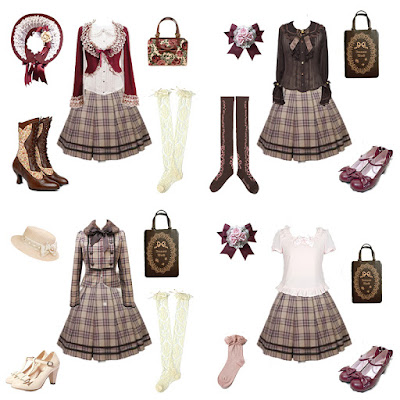 While this skirt on its own is nice and gives for some good simple looks, I really included it so we could have the jacket and skirt plaid combo. Each piece on its own is not anything special, but put them together and you have a very striking look which I enjoyed quite a lot! 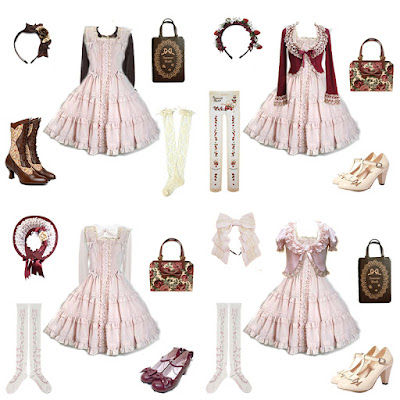 Another Meta piece I adore made its way into this wardrobe and it's one that can be easily dressed up or down. You could also layer it over some of the other dresses because the buttons down the front are functional, but I had no way to photoshop that! But it gives another layer of versatility to this capsule, and that's what you want in a small collection. 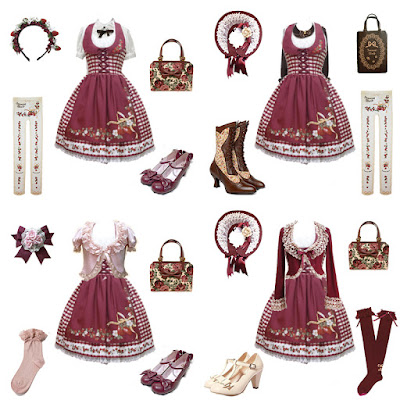 Lastly, the Innocent World Annette JSK is the most "country" of the main pieces, and I included the matching tights and headdress to go with it. It's a very easy piece to work with and I honestly don't have much to say beyond that!

I promised some ramblings at the start of the post, so if you're just here for the pretty pictures feel free to leave now ^__^

Since this wardrobe was actually put together for someone looking to get into lolita I wanted to provide some more information on it and explain my choices. I also discovered a few things I should have done differently after I put the example outfits together.

First of all, let's go over the things that I think could have been chosen better. The short sleeved pink cutsew would probably have best been a wine or a brown short sleeve blouse or cutsew instead since we already have the pink short sleeve bolero, or vice versa. Another brown outerwear option, probably a more casual cardigan, would have been very useful too since the jacket is not always the best choice. Also, the bags I chose weren’t sufficiently neutral  and I should have subbed the floral one for an ivory one, unless mis-matched bags are okay with the wearer. In addition, I’d underestimated the amount of pink in this wardrobe so a pair of dusty pink shoes would have been really helpful, and a couple more headwear and legwear options would not have gone astray.

However, having said all that, other than doubling up with the pink cutsew and the pink bolero, none of the thing above are necessarily issues, just areas for improvement. But I really do think having a short sleeve brown bolero instead of the pink one would have been a lot better!

I also wanted to share a bit of my thinking behind the "statement pieces" of the wardrobe - the things that stand out and give the wardrobe as a whole variety without necessarily being versatile themselves. I love neutral basics, but neutral basics can be boring and you need balance between them and some statement items. In this wardrobe there are four main statement pieces: the green floral JSK, the plaid jacket and skirt set, the bonnet, and the matching pieces for Annette.

The first two I already discussed above and it's pretty self-explanatory how the bonnet adds pizzazz without being the most wearable of pieces. The tights and headdress for Annette are statement pieces in that they give you a full set with the JSK, which can really elevate outfits with it, but they are less thematically versatile. They still work with other main pieces in the wardrobe, but mostly only when worn together. So they are limited, yet provide varied coordination options.

I hope you enjoyed this wardrobe and the fact that I went a bit more in-depth about my choices in it. I have really missed doing this type of post...so prepare for more!
Posted by Roli at 12:49 pm