Yes, yes. I broke my spending ban... in a big way! But it's kind of okay, because James bought some of it for me, so it's kind of not really exactly breaking the ban, right? Or at least not breaking it too badly since he started it, right? ^__^  There's a bit of a back-story to how I came to this first foray into Japanese auctions, so let us begin.

James said he'd buy me something nice because I got all my uni assignments done ahead of schedule, which I did, so I started trawling Lolibrary to find myself a nice floral JSK. I've been wanting a new floral piece for a while so I thought it'd be good to actually find a few specific pieces and put out a WTB, rather than casting about vaguely for "something floral". So I did: 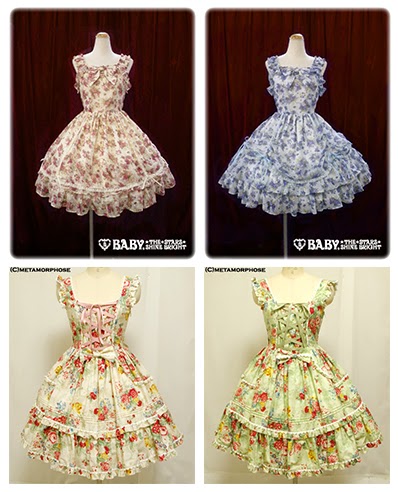 Then, since I'd been casually browsing Yahoo Japan [and Mbok] on and off over the last few months, I thought I'd go through the Metamorphose and Baby JSKs there to see if I could happen to find any of these pieces at a reasonable price. And, believe it or not [and I hardly did at first] I found the Florina Rose Chest Ribbon JSK in ivory, with no bids on it! Then, since I was going to bid on one thing, I had a bit more of a browse to see if I could find any other good deals.Which I did, which is why this is a haul post rather than a single dress post. In the end I got the Baby JSK, a bulk lot of socks and a mixed bulk lot of lolita clothes.

I'll start by showing you the items and gushing a lot about how absolutely chuffed I am, and then at the end there's a bit of a review about Buyee as a shopping service. 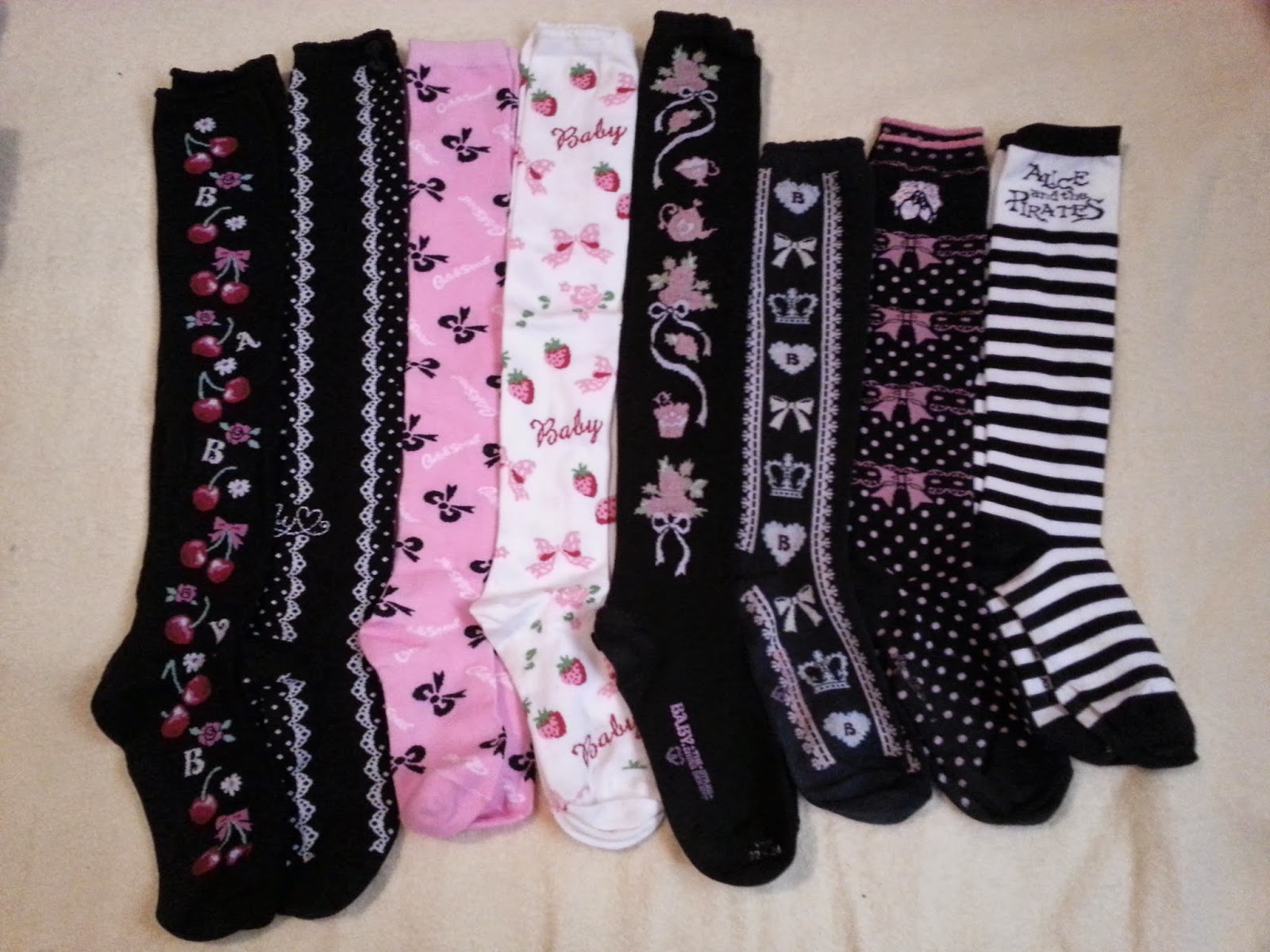 This lot of socks [plus random headeating black bow, which I forgot to take a picture of] was a bit of a YOLO purchase. I bid as much as I was comfortable paying, was outbid immediately, but then I thought... I wonder if I can get it if I bid just 100 more yen? So I did, and I was then the highest bidder, and no-one else outbid me so I ended up winning. Which felt a bit weird. I was over what I was willing to pay, but it was still a good deal, yet at the same time I didn't really want them as much as I paid. Not all the socks are my style so I'll probably sell some of them off soon, but overall I'm just like "Socks! Yay!". I really have a thing for lolita socks, so getting these made me really happy and I'm glad I won the auction in the end. And I even have token pieces of AP and AatP now, though I don't know if I'll hang on to those particular [far right] pairs. 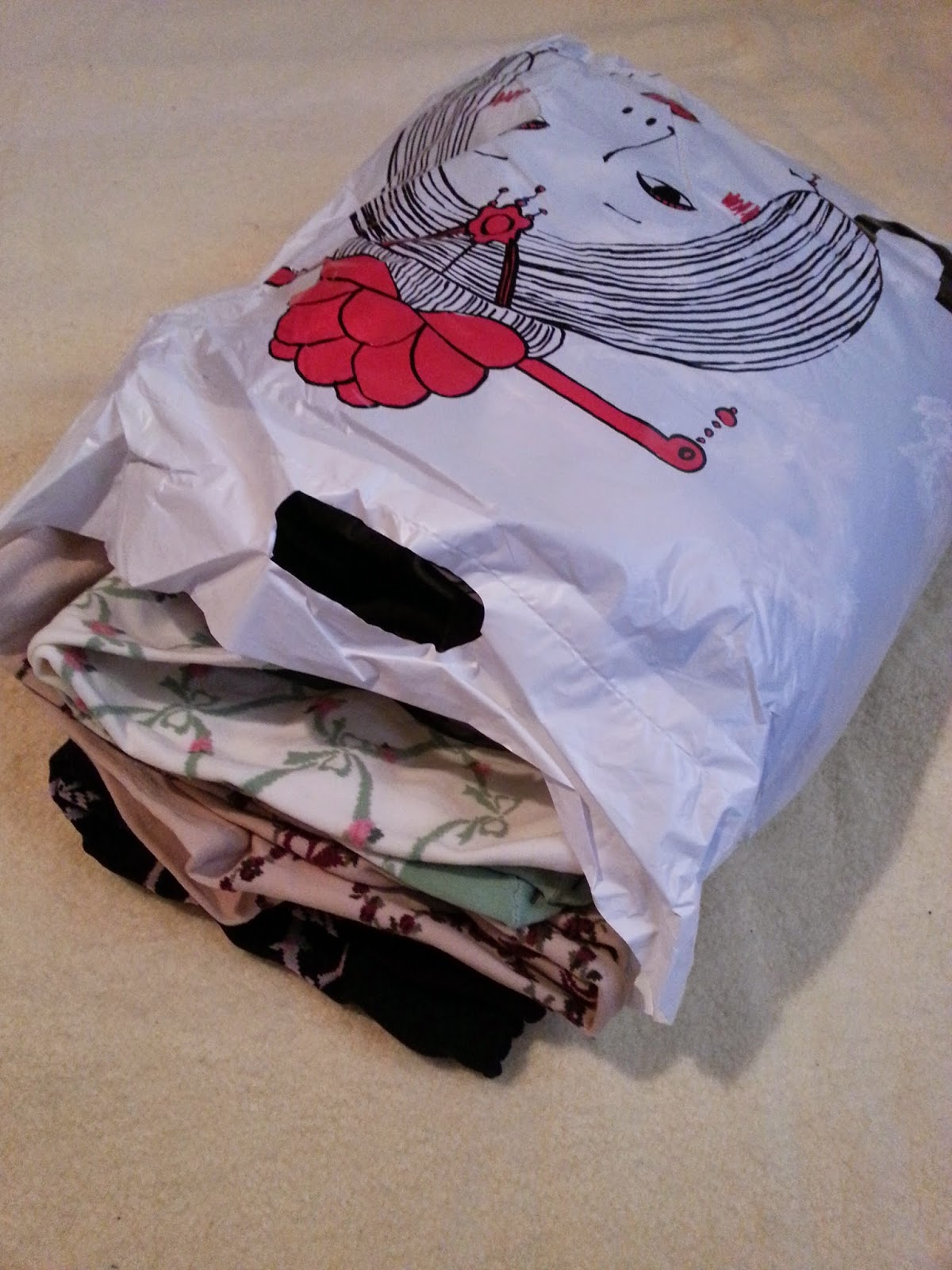 I also found a glorious bulk lot randomly while browsing, and just had to get it. Why? It had three skirts, two pairs of bloomers, four pairs of socks, a blouse and two boleros and all for a very reasonable price and it ticked a lot of boxes for me. Mostly I just fell in love with the socks but I was also keen to get my hands on an IW bolero; my bust is currently too large but I wanted to [cheaply] find out how my shoulders and arms would fit. I also thought the bloomers looked good and would be handy to have if they fitted, the blouse would be nice for me or maybe our model wardrobe, and the skirts could probably be sold, since IW skirts are notoriously small. I know it seems a bit silly to buy a lot where I'm not sure of the fit, or even of the condition [the listing pictures were good, but not very close so they could be hiding flaws], but with the lolita resale market being pretty good I figured even if I only kept the socks I could resell the rest and make back what I spent, so it was worth giving it a shot. And besides, given the retail price of IW socks the socks alone almost made it worth it anyway.

And oh my gosh, was it ever worth it! 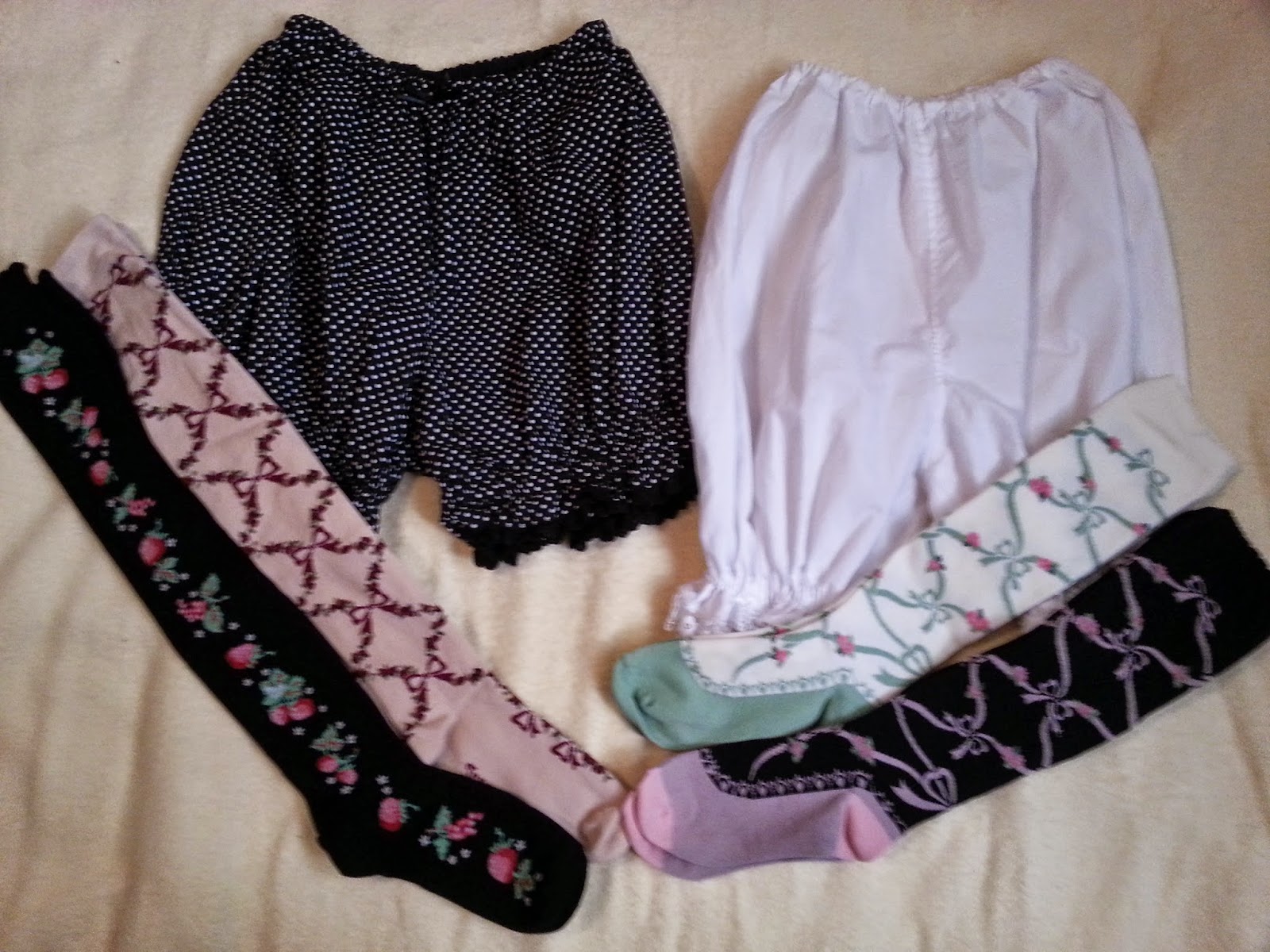 First up, the socks are cute! The strawberry pair must be offbrand, because there's no logo anywhere, but they're still really adorable. The bloomers are also nice but as they don't fit me we'll probably be keeping the white pair for the model wardrobe and I'll sell off the polka-dot pair. 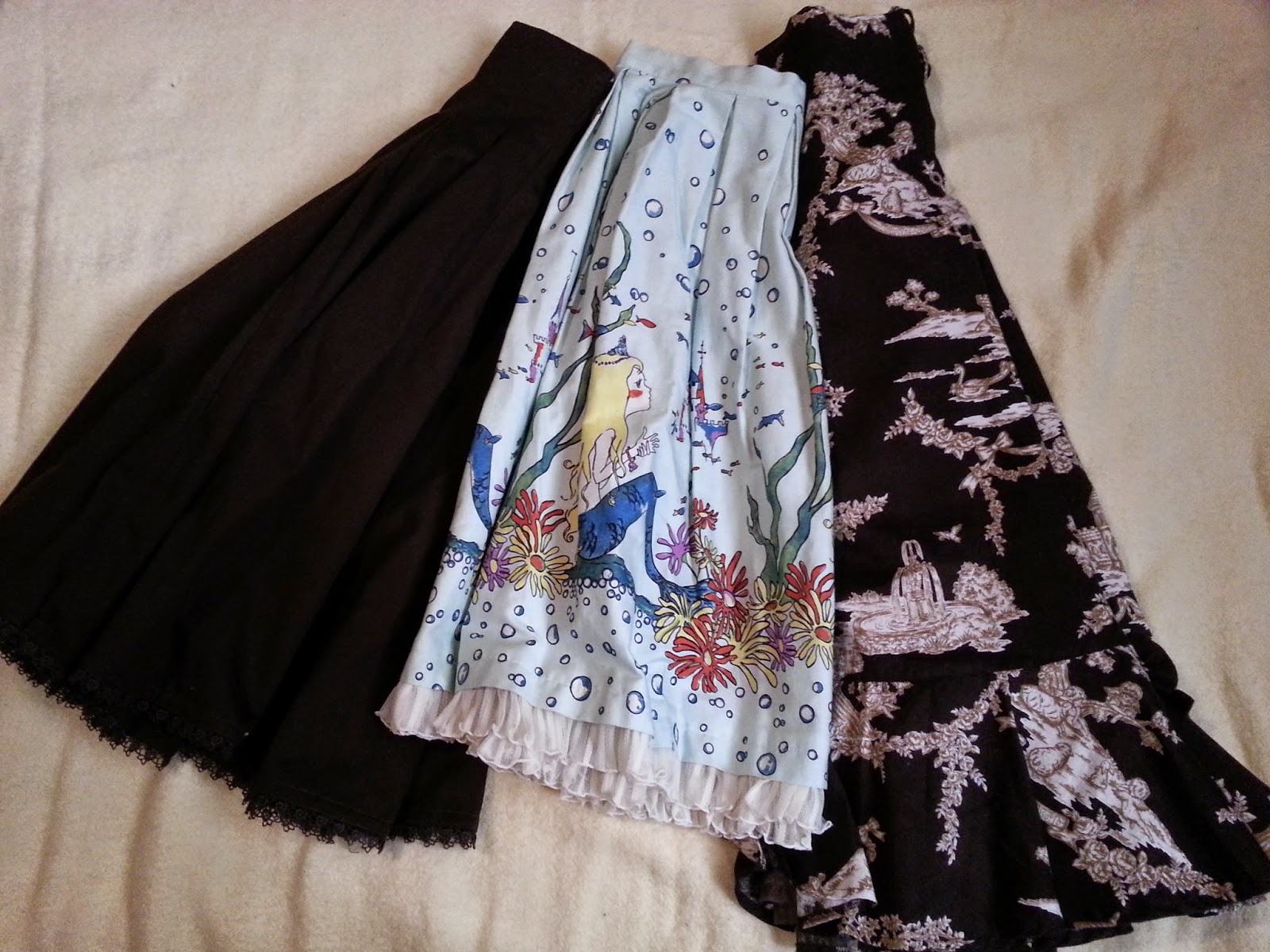 Then we have the three skirts. Unfortunately, Innocent World lives up to their reputation of smallness, but the solid brown skirt will definitely have a loving home in our model wardrobe because James and I both think it's gorgeous. The Angel Land skirt is a bit bigger, but I'm not in love with it so I'm currently thinking I'll sell it rather than hang on to it for when I've lost more weight. But the Emily Temple Cute mermaid skirt is the cutest of the bunch! It's quite small, and definitely not my style, so it's an immediate sell but it really is a gorgeous piece in person. I hadn't loved it when I'd seen it online but in person there's just something kitschy and sweet about it. 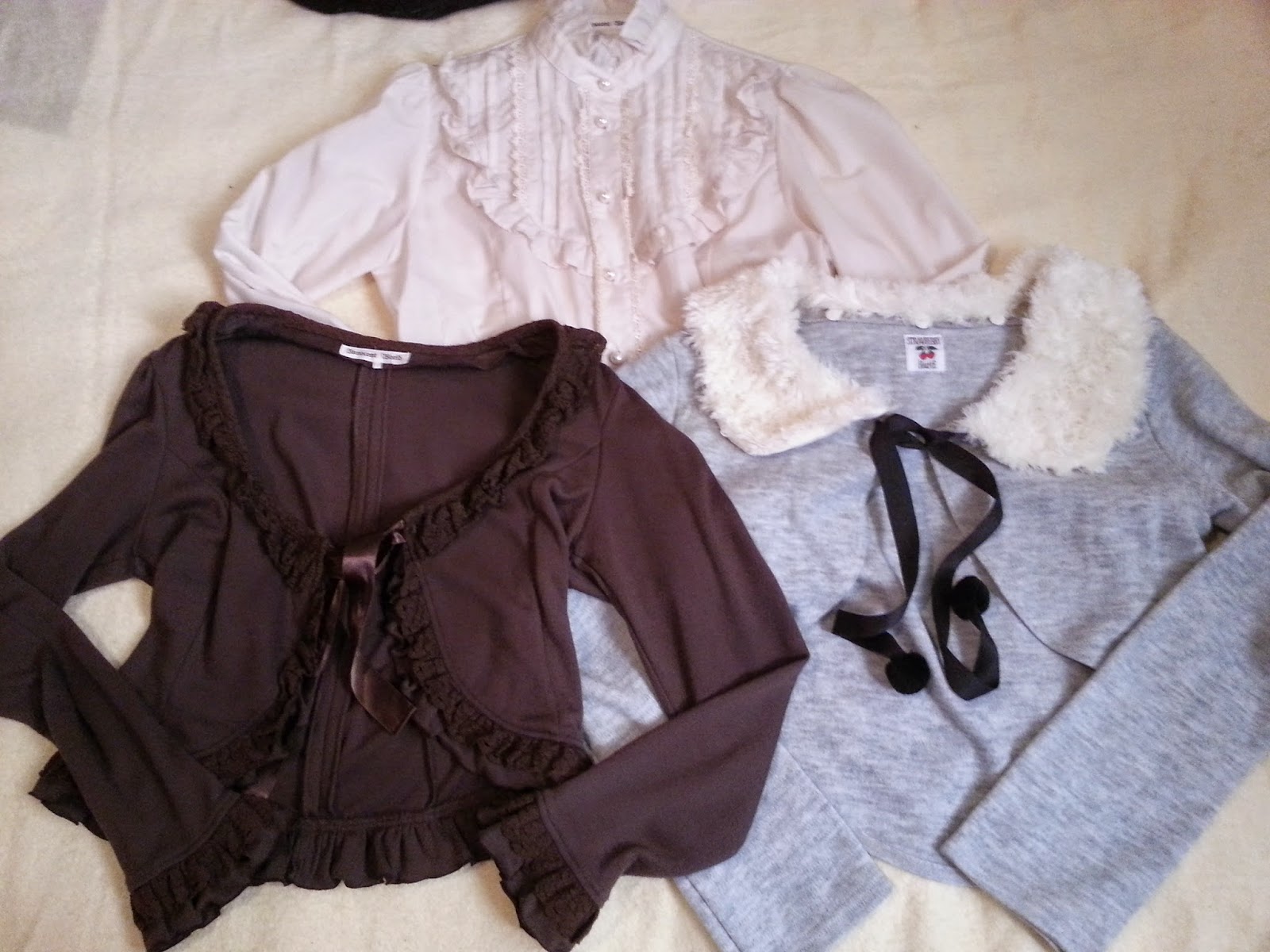 And then we have the blouse and boleros, plus Panda's napping butt sneaking in at the top. Surprisingly, both the boleros fit me, though the IW one is absolutely skin tight on the arms so even though it fits it doesn't fit well.... yet. The grey Heart E one is also tight, but not so much, and the white faux fur collar is detachable so even though I'm not much of a person for grey I may actually get some wear out of this. The blouse, which is lovely and silky and smooth, is going into the model wardrobe. But the great thing about the model wardrobe is that I can always reclaim any pieces I put in there if I get to a point where they fit ^__^ 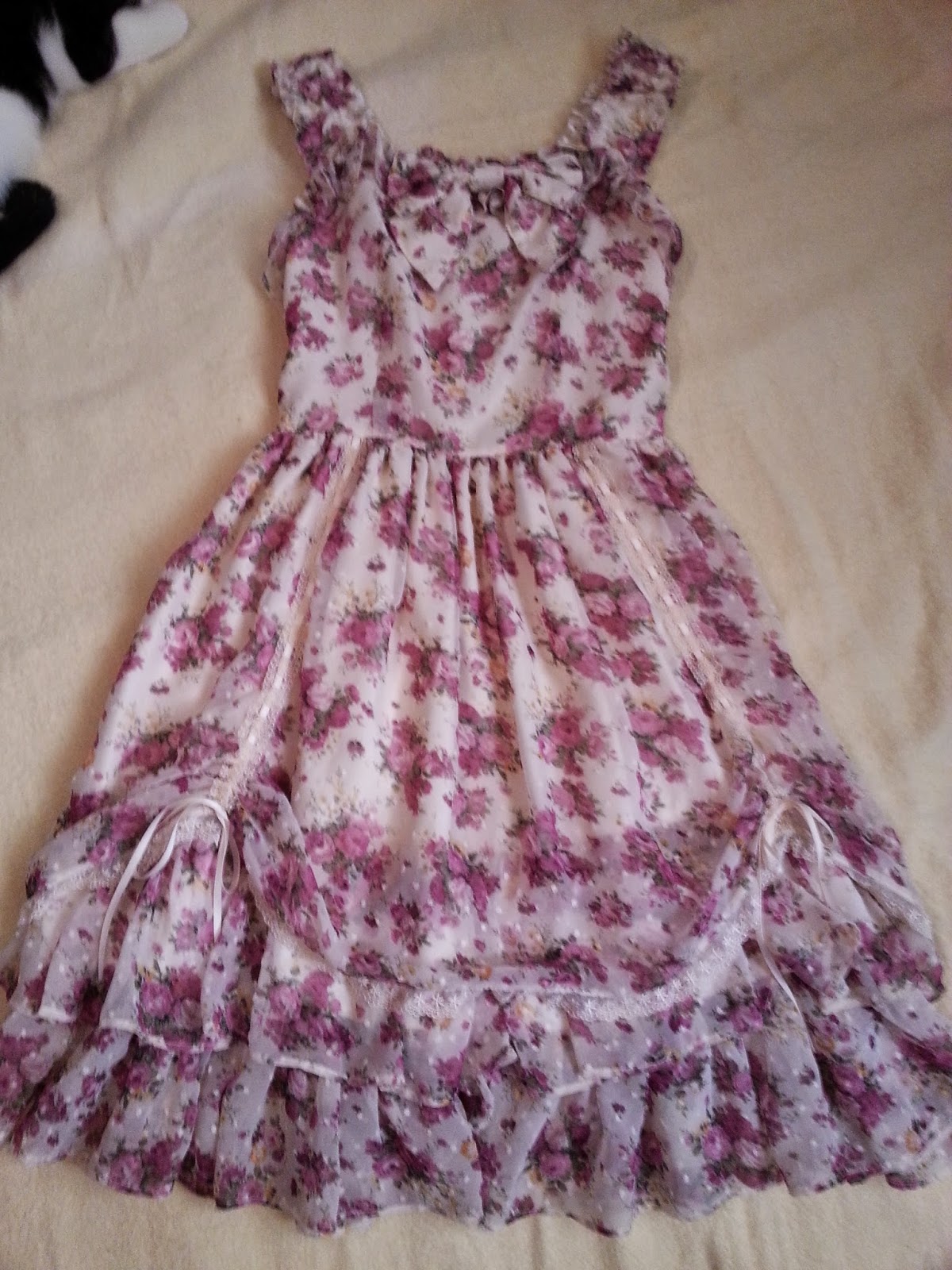 And lastly, the dress that started it all: Florina Rose, which is also the name of a pornstar as I discovered while trying to search for worn pictures of the dress. Recently I fell a bit in love with AP's Dramatic Rose so when I was hunting through floral dresses on Lolibrary and saw this, it felt like fate. This JSK has the lovely drapey, floaty, ethereal feeling that I loved in Dramatic Rose but is a lot more toned down and wearable. In person it is lovely and fits me quite well. It's a bit shorter than I like but I'm on the tall side so I think most brand is always going to b a bit short for my tastes. However, it's a gorgeous piece and it's also something I could dress up or dress down so I think it's a great addition to my wardrobe.

Overall I'm really, really happy with everything I got and I've been happily excited ever since I opened up the big box this morning. Sure, I'll be parting with some of it immediately, but I got some really good deals and it was fun! I love getting packages in the mail, especially big ones with lots of items, which this certainly was. Everything is in very good condition too; there's some feeling of wear most items but I haven't seen a single bit of damage.

I used Buyee as my shopping service because since I was an existing Tenso customer they gave me some half off service charge coupons. Yay! Also, I have been happy with Tenso so I figured Buyee would be good too. As I used their site I liked their interface; it was very straightforward and simple to use. I'm not sure how their fees compare to other shopping services but I thought the were pretty reasonable. However, I will say that cheap buys end up less cheap ones you add fees, domestic shipping, consolidation and international shipping. Even though what I got was definitely a bargain compared to nearly everything on Western auctions after fees, if I hadn't managed to find items with low starting prices it wouldn't really work out any cheaper than buying in the Western market. Also, if you place a max bid amount Buyee will bid up to the amount, even if it means unloading an extra 2000 yen into an auction you're already winning at the last moment. The lesson there is only bid manually and in small increments. Just a few things to keep in mind since I often see it said that Japanese auctions are much cheaper; the can be, but they also might not be.

As far as my order timeline goes all my auctions finished by midnight on the 28th of March, I paid immediately and everything arrived at Buyee on the 7th of April. I really liked how they marked down the status of each package, though admittedly I got super impatient watching the status go unchanging for a few days at a time! But at the same time I liked that they clearly marked what was going on with each package. On the 8th I applied for package consolidation and on the 9th it was shipped, and I got to impatiently watch the tracking until my glorious package arrived on the 13th. So it was only a bit over two weeks from the auctions finishing to me getting my stuff. Overall, I had a very positive experience with them and will probably use them if I want to shop from Yahoo Japan again.
Posted by Roli at 1:33 pm