A Wardrobe Challenge: The classic and gothic edition

This wardrobe made me realise something that I've suspected for a long time: I don't do gothic very well at all. Gothic lolita, regular western goth, whichever. I'm just not good at it. So this may not be my best ever advice because I'm working with an aesthetic that I don't think I have the best grasp of.

However, with that said, I do think there are a few holes in this wardrobe that need plugging so I think I can still make some helpful suggestions. This is what they showed me they had: 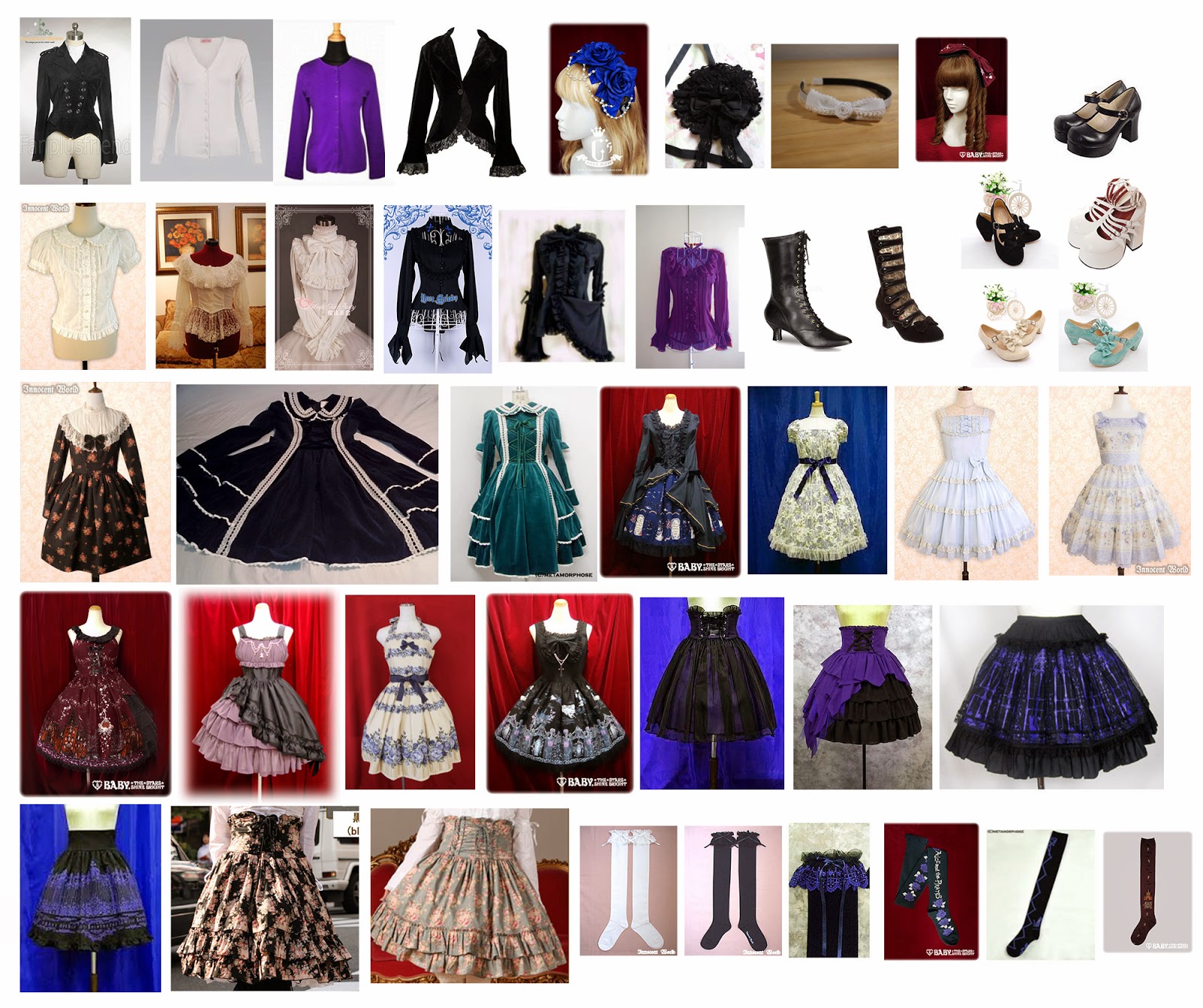 As a side note, the two black jackets aren't exact. The gave me pictures that they said weren't exactly right, and since I wanted higher resolution images to work with I found jackets that were similar myself. After doing that, these are my suggested additions for their wardrobe:

These are the bare minimum pieces I think they need to get the most out of their wardrobe. More legwear and headwear options were an obvious need and to be honest I think they could do with even more than what I'm suggesting. I know the black, vintage style hat isn't a normal lolita piece but I felt it gave a great feel to some of the sample outfits I used it in, so there it is. They definitely need a simpler black blouse, and given that they had several blue pieces I felt that a dusty blue blouse gave them some great versatility. The blue shoes they had didn't really match their blue main pieces, or at least not on my computer, so I added a second pair of ivory shoes.

Also, half-way through making sample outfits I realised I forgot to add wristcuffs to my additions to adhere to my usual "something on the wrists" mantra so if bare wrists scandalise you, imagine them where appropriate. However, I do actually feel like this wardrobe is more pearl bracelet style than lacy cuffs style so I honestly think that nice jewellery would serve this wardrobe better anyway. Regardless, on we go!

A few different but simple coords to kick things off! I wasn't too sure if the print is grey or blue, but if blue another option would be using the dusty blue blouse I recommend they get.

Though these three coords use a lot of the same pieces I feel like they each have very different vibes ranging from quite casual to rather fancy.

These coords feature the first appearance of the vintage cloche hat! The outfit I used it in really has a great feel, I think. A bit casual but very, very smart at the same time. If you're someone who wears lolita regularly, or everyday, I think pieces like that hat would give you styling options that are a bit unconventional which would keep lolita feeling fresh.

Of course, I had to use the matching accessories to this dress! But it goes to show how much of an impact shoe and blouse choice makes, which is why I think shoes are an integral part of wardrobe variety.

I adore all of these outfits! I would wear each of them, that's how pleased I am. And even though they look a bit same-y next to each other, there really is a lot of variety here, and they'd look even better if they were worn with different jewellery.

These outfits feature a lot of similar pairings to the ones before, but are still different enough, I think, to not feel like you're wearing the same outfit. Another pair of OTKs in blue and ivory and an additional blue hair accessory would also help with that, though it's not really necessary.

I tried a couple of different looks for this gorgeous dress, though looking at it again I'm not sure the left outfit would really work. I like showing more casual options but I think that's a little too casual.

Not much to say about these ones, except that I didn't even try to make a casual one because that is not anything close to a casual dress.

With no other emerald green in the wardrobe there's nothing matchy-matchy to put with this OP. However, it works nicely with both black and white for old school looks, I think.

This OP is so cute! I still don't tend to like coming up with coords for OPs but this one was a plesaure.

I have this skirt in wine, and I really like it. It's definitely one of the nicer Bodyline pieces, and I'm saying this because otherwise I have nothing of note to say about these coords.

The black colourway was easier to work with than the grey one... I especially love the centre outfit! Maybe I'm just infatuated with that hat...

Given the kind of punk-ish style of this skirt, I thought some more casual looks worked well. Though I will note that with the socks in the right outfit I'm honestly not sure if they're meant to be navy or purple, so I've taken a Schrödinger route and assumed that they're both, in a way, and used them willy-nilly. So please mentally replace them with the plain black pair if they're the wrong colour for an outfit.

Coording this skirt is where I really hit the gothic wall... these outfits are all quite nice, but I feel like I've missed the mark a bit. I can't say how though, so I'm probably just over thinking it.

Not much to say on these outfits except to point out, again, that the hat is awesome.

And lastly... Iron Gate! It looks purple but isn't, and again I repeat my disclaimer about the socks in the first outfit.

So there we have it! Another wardrobe made a bit more cohesive with a few little additions. Like I said at the beginning, what I suggest is definitely a bare minimum, and they'd do even better with even more options, but I hope this can be a bit of a helpful starting point.
Posted by Roli at 6:10 pm