A Wardrobe Challenge: I see myself in this wardrobe

The title is honest; I really did feel a kinship to this person's wardrobe. Why? Because, like me, they have  more shoes than main pieces in their lolita wardrobe. Their ratio of shoes to main pieces is 15:12, mine is 17:14... though that's only counting lolita specific shoes, not the abundant other pairs I have. As a result of that ratio this wardrobe wins the imaginary prize for not requiring any suggestions for shoes. Yay!

Anyway, enough talk of shoes. These are the pieces that they presented me with, along with an ample assortment of bags which, as usual, I haven't included. They did not include headwear or any wristcuffs they may have, though I am assuming they do have some. 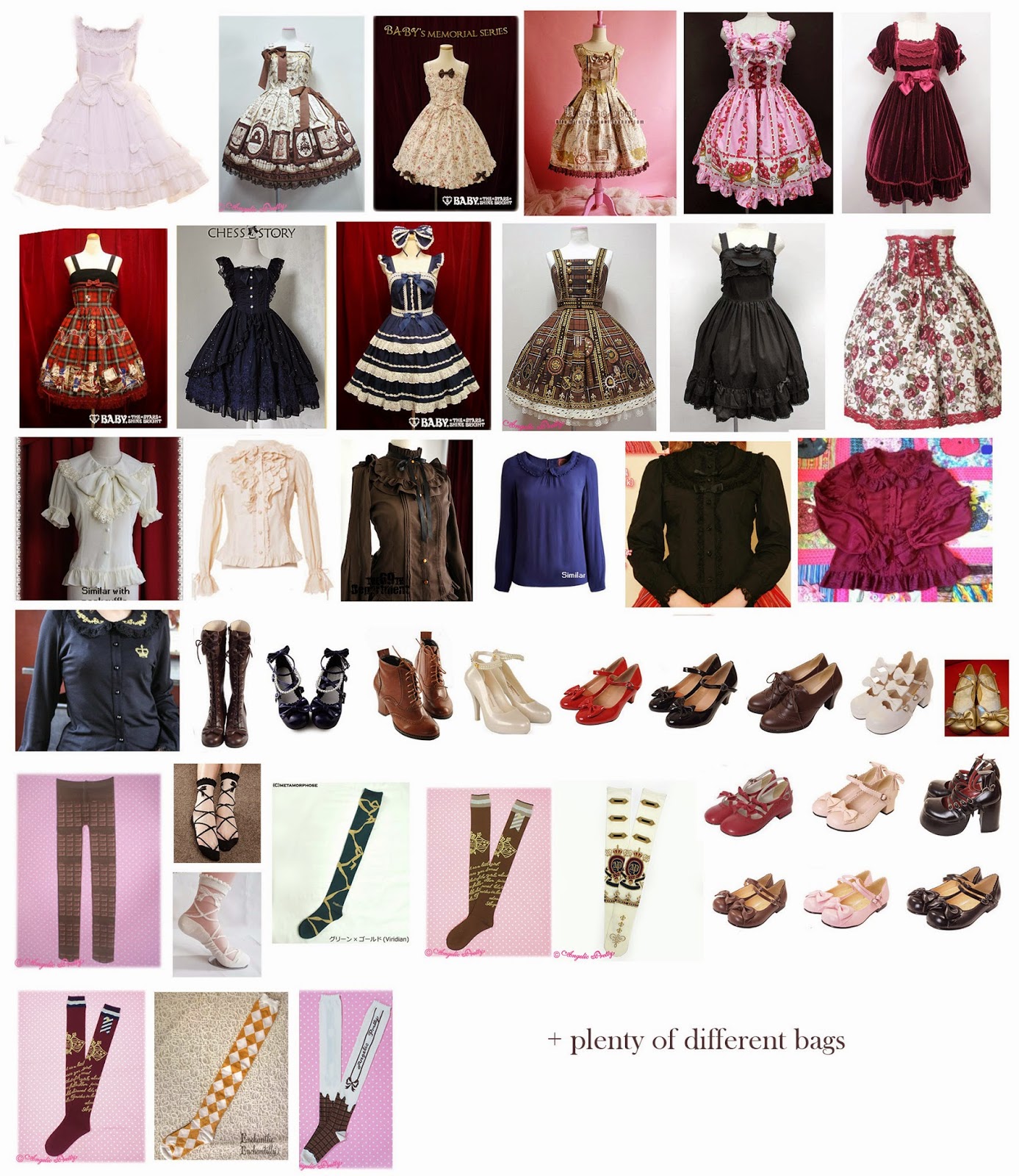 And below are my suggested additions. To be honest, some of these aren't 100% necessary. As you can see above, they already have a pretty well balanced wardrobe. But I adore dark green in lolita so when I noticed their green and gold socks I had to add some pieces to compliment them; even though they aren't "necessary" I think they do add a bit more depth, especially because it's an unusual colour choice. The off-white blouse I've added isn't completely needed, but I think having a slightly more elegant longer sleeved blouse gives them more options.Also, I added a short sleeved black blouse in my suggestions but, after having used it in some outfits I realised I didn't actually need it and could have just, with a few alterations to the outfits, used their existing black blouse instead. It does add more versatility, but they would probably be better served spending the money they would spend on the blouse to get some plain black and plain white OTKs instead. 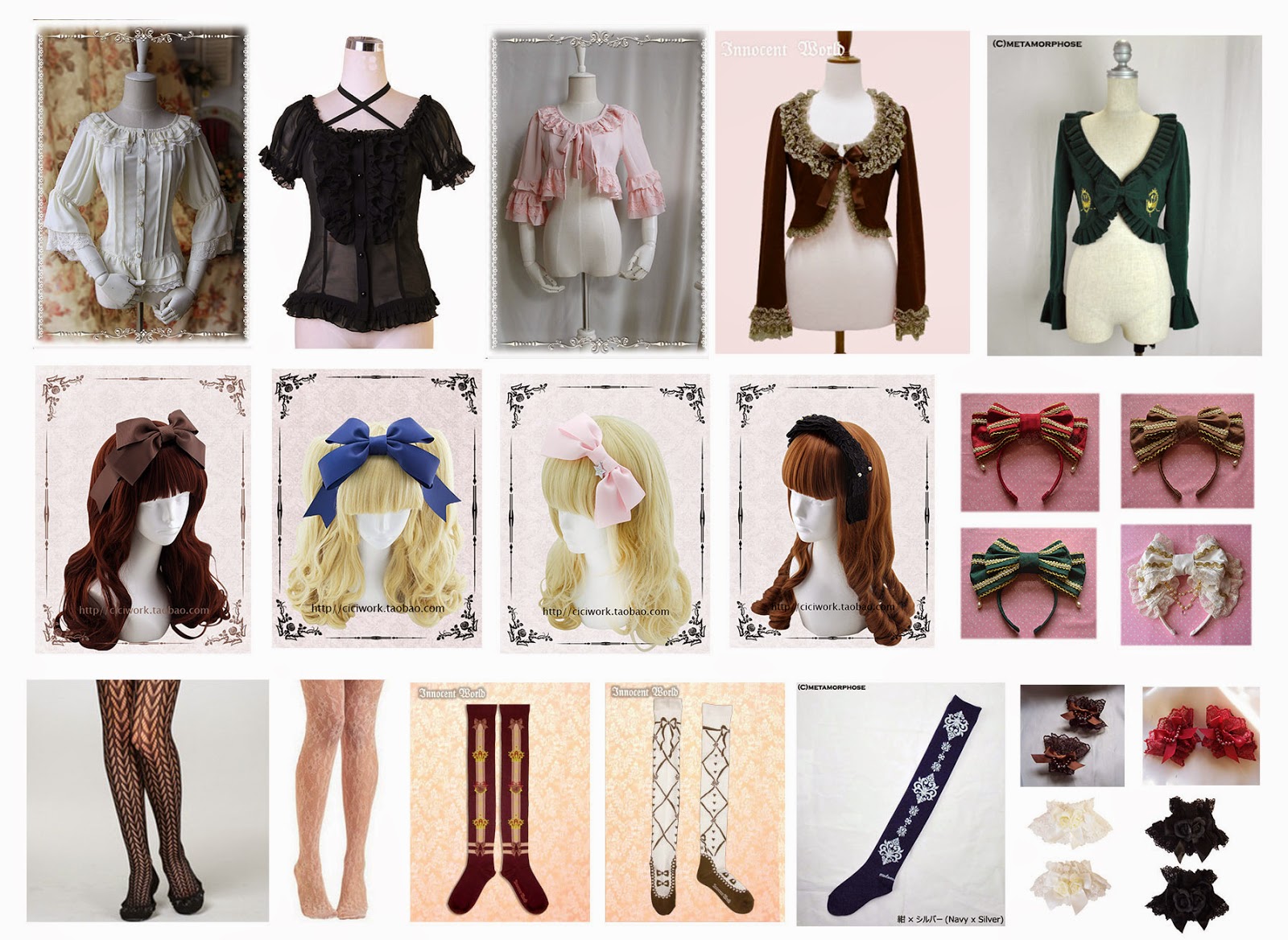 Starting off with my old nemesis... the OP. As onepieces go this one was  good to work with and I think it's a gorgeous dress. The ivory and brown are more classic leaning combos, while the red and gold is a bit more sweet styled.

The two outfits on the left and centre are fairly well balanced, I think, but the rightmost outfit would need some smaller red accessories to really tie it all together. Though, having said that, the right outfit is my favourite one.

This is the sweetest JSK in Anon's wardrobe, but since the rest of their wardrobe is more classic leaning I came up with outfits that I think span the classic to sweet spectrum as well as you can with a bright pink dress.

To get the picture of this JSK I photoshopped the sleeves off the OP version so excuse the slight weirdness of the image. Despite my normal praises of solid colours, I found the white a bit hard to work with... I guess I just don't like white. But you can see my first usage of the dark green items here!

Not too much to say about these outfits, except to point out that since so many of Anon's main pieces either have brown in the print or match well with brown, I felt that they needed two different pieces of brown headwear, which you can both see in the outfits above. As always, my suggestions are just suggestions for types of items so there's no reason they need two brown headbows; a cute hat or beret in brown from one of them would be great!

Here the outfit on the right definitely needs some smaller chocolate themed accessories to make the tights work thematically, but the other two are good as is.

For some reason the dark brown bows on this JSK ended up really bugging me and in the left outfit, where there is no brown in the accompanying pieces, I felt like they really stuck out. So I'm not sure how distracting the bows would be in that outfit in real life, but at least the other two outfits have enough brown accents for it not to be an issue.

Ah Loyal Rosette, how I wish you had suited me. I got a case of raging jealousy putting these outfits together, but if Anon ever wears my suggested combinations I guess I'll live vicariously through them.

The green returns! Seriously, how Christmasy is the outfit with the green? Though the left outfit is like an Australian Christmas outfit, very light and easy to wear during our burning summers.

I don't have much to say on this set of outfits, except that again in outfit like the right one smaller accessories would really help tie the colour scheme together.

More green! And red, and black... this JSK was so easy to coord.

This JSK was also pretty easy to work with, and cute to boot! I'm not sure if they have the headbow picture on the mannequins neck, but if they do they'll have another good headwear option for extra variety.

In closing, I want to reiterate that some of my suggestions here are more enhancements rather than necessities. I also want to point out that for both this an any wardrobe, some plain legwear options [which I didn't include] are always good ideas whether they be plain OTKS or solid colour tights. And, have made both those points, I'll be off!
Posted by Roli at 11:07 pm