We woke up on Monday with mixed feelings - it was our last day in Tokyo. We were sad, because the adventure was ending. But we were happy, because we like being home and due to the bad start with the overnight flights and not truly realising how much we'd be walking during the trip, we were quite run down by this point.

We went downstairs for our last breakfast then returned to our room to pack. We ended up having to leave some things behind - be we had planned for this potentially being a thing so had deliberately packed some clothing items (and even a laptop, long story) that we could just leave behind.

I have a note that somewhere here I said "ready to squirt" (in the voice of a Warcraft 3 peon "ready to work") and James responded by sighing like Kif. I don't know why this was said, or what I meant. It's a mystery...

Anyhoo, we finished packing up and went downstairs to checkout of the hotel. We were able to leave our luggage behind, so we went out to enjoy our final day in Tokyo. Our destination? Nakano Broadway! 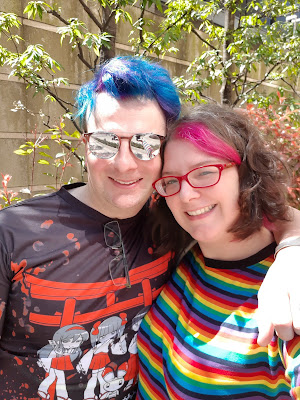 But first, we took so photos in front of the hotel!

At Shinjuku Station we had to recharge our Pasmo cards, which was easy to do at the machine, and then had to wait five whole minutes for our train - the longest we had to wait for a train all trip! I took some photos around the station since it was hitting home pretty hard that the adventure was coming to an end.

The train ride was uneventful and soon enough we got off at Nakano Station. After a quick bathroom break we walked into the Nakano Sun Mall towards Nakano Broadway. We peeked into a few stores, but didn't stop to browse at all.

And when we entered Nakano Broadway itself, we did pretty much the same thing. We didn't really go into many shops, because after everything in Akihabara the shops with all the figures and other random merchandise were less exciting. We're not really collectors, so I think we're just not the target market.

However, we did make a really awesome discovery - Dragonbeard shoes! This shop has super stylish sneakers at really good prices, and after lots of trying and discussing options James bought two pairs. Even though I definitely bought the most stuff, I was really happy that James found some awesome things in Tokyo as well ^__^

Then we went back into Sun Mall so I could grab a burger from Lotteria for lunch - I wanted to try a Japanese burger and James wasn't hungry, so I could have whatever I wanted! It was nice, but nothing to write home about.

We did go back into Nakano Broadway after lunch, but quickly realised we weren't interested in browsing more, and decided to head back to Shinjuku. We did, however, pop into a pet store in Sun Mall on the way back to the station, where we saw this super adorable kitten!

We actually got off the train at Sendagaya Station, as we'd decided to spend a bit of the time we had left in Shinjuku Gyoen. We walked the little ways to the garden entrance, bought our tickets from the machine, and entered. We got lucky in our choice of gate, because we entered right at the cherry blossom section. And even though the blossoms were definitely past their prime, they were still lovely.

After we took a bunch of photos of the flowers and each other, we sat on a park bench for a while and just relaxed. It was really nice and very restorative. We watched the flower petals fall and just...sat.

I used the panorama function on my phone for the first time here. 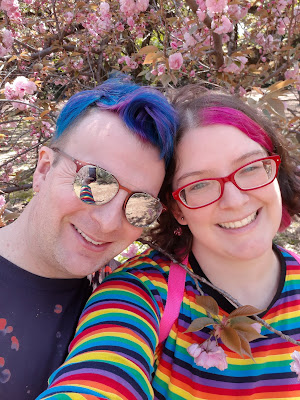 We did wander through a bit more of the garden after our pleasant half-hour sit, but were a bit too tired to get as much enjoyment out of it as the wonderful gardens deserved. We did notice a fellow Westerner sitting over the fence that clearly had a sign saying "don't go over this fence" and were able (with the aid of Google Translate) to report him to a staff member. Then we left the garden and headed back to our hotel.

I don't remember exactly what order we did things in, but we got a massage at the hotel spa and repacked out suitcases a little (had to squeeze those shoes in!). I fell asleep during my massage, which is something I never thought would be a thing. It was so good!

And then a little after 6 it was off to the bus terminal to buy tickets and catch the Airport Limousine Bus back to Narita Airport. We were happy and sad to be going, but honestly I was mostly just very tired. 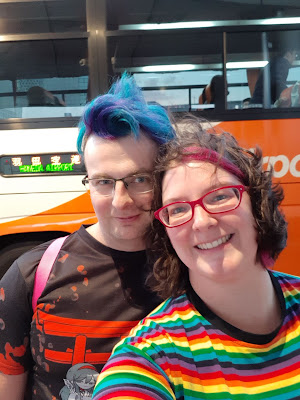 At the airport we checked in and handed off our luggage, then found a restaurant to have dinner in. I had katsu curry, which was nice, but James made the superior food decision of some amazing garlicky fried rice with steak dish. He often makes better food picks than me when we're travelling!

Then soon enough it was time to board our plane. We had good seats this time - the first two seater towards the back of the plane after the three seaters, which meant we basically had a seat worth of space between us and the window, which made things a lot less cramped. The flight was uneventful, we both slept a bit more than on the flight in, but we were still quite exhausted when we landed.

Land we did at 8.15AM on Tuesday morning! Clearing customs and getting our luggage was a quick affair, then we reclaimed our car and James drove us home. I like my home! 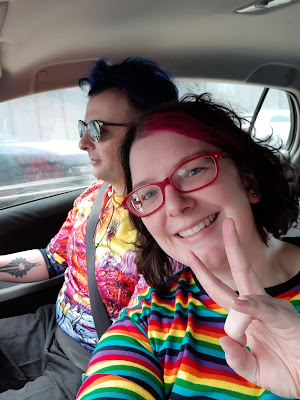 Tokyo was an amazing, but completely overwhelming experience. To be honest, I spent a lot of time being stressed and anxious and worried but at the same time it was quite an amazing and surreal experience. It was my first time ever in a non English speaking country, first time taking a flight longer than three hours, and like with any first time I learned a lot from it. We've already got plans to go back and I'm really looking forward to spending more time in such an amazing country with more knowledge and better plans!

I hope you enjoyed reading my Tokyo posts...and now we can go back to your regularly scheduled loltia fashion content ^__^
Posted by Roli at 11:10 am