On Saturday we got off to a slower start, which was nice after a very full on Friday! We left the hotel at midday, detoured via Family Mart for a reason I can no longer remember, and hopped on a quick train to Harajuku, because that's where we were going to meet up with some of our friends who happened to be in Japan at the same time! We were also going to do some photoshoots as we went about our day, so I was dressed in lolita again ^__^

James and I got to Harajuku first, so we took some selfies and some proper photos of me, and just hung around.

Soon enough we saw two colourful beings walking towards us - Smella and Charlie! Hugs and outfit and hair compliments all around! We waited for a little longer and we shortly joined by a friend of theirs who was living in Japan, Selina.

Our first order of business was a visit to Meiji Jingu...via the back entrance. Smella and Charlie had been denied entry a few days before based on their clothing (which is quite out there, but still) and wanted to try again by an apparently less well staffed entrance. So we just followed their lead, and spent a surprisingly pleasant twenty minutes or so walking through the suburban backstreets of Harajuku. It was so nice to see this quiet, everyday side of Tokyo, and it was also really epic and weird to be spending time with friends in another country!

After a while we got to the entrance to the park the houses the shrine and realised there was a staff member there after all! But he didn't try to stop us, so our colourful group was able to enter the park and head towards the shrine. Even though I was literally foot-sore and weary by this part of the trip, it was still a wonderful and refreshing change to be walking in a group of friends on the broad dirt paths under the towering trees.

However, I have to confess I'm kind of not much of a one for shrines. Once we entered Meiji Jingu itself I was wowed by the architecture, but that was it. We didn't look around too thoroughly - it was kind of enough for all of us to be there an experience the general atmosphere for a little while.

We were lucky enough, however, to witness a traditional wedding processional. I joined the paparazzi crowd briefly, which is not necessarily a fact I'm proud of, but I was so chuffed we got to see this.

Then we headed out in the direction towards Harajuku proper, though we didn't get very far before we stopped to take some photos ^__^ 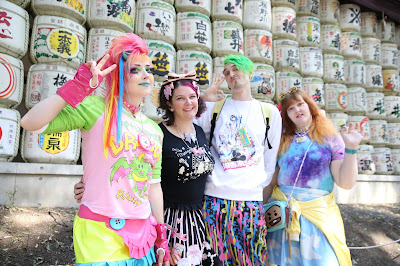 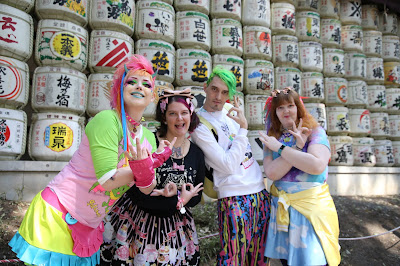 Aaand that typified our walk out. We'd go a bit of a way, stop for photos, rinse and repeat. I really loved the wall of sake barrels, it was gorgeous. There were also a number of little bridges and lanterns by the road so it was really a lovely walk.

But lovely as it was, it was really great to reach the big torii gate and exit the park onto Harajuku Bridge. Time for more shopping! Because never enough shopping ^__^

On this day we happily surrendered control of our route to Smella and co. and we ended up in the "backstreets" area of Harajuku. Smella and Selina took a selfie in front of an empty window which used to contain the iconic clock, which I didn't even know didn't exist any more.

Most of the shops were unfamiliar to me, which was actually pretty cool. The most exciting shop, I think, was Dangerous Nude. Not just because the clothes and accessories there were very cool, but because the owner (who was amazingly dressed in a full on goth outfit) was super friendly. She took photos of all our outfits and told us about upcoming alternative clubbing events. I ended up buying a beautiful flower and lace headdress, which is more expensive than I liked, purely because she made shopping there such a great experience! I mean, I love the thing, but if she hadn't been so sweet I would have walked out empty handed. 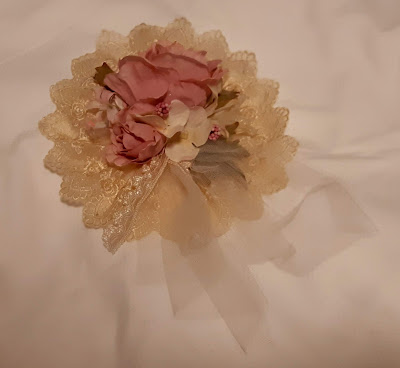 After a bit of shopping, we decided it was time for a late lunch (it was after 3PM). After trying to go to a gyudon place only to find it full, we visited this avocado speciality restaurant. We all (except Selina, who came despite not liking avocados) got an avocado smoothie drink and an avocado meal - mine was the taco rice, if I remember correctly.

The food was delicious and the smoothie thing was also pretty darn good. Weird, and thick, and very avocado, but somehow still quite tasty and not cloying. As Charlie said, trying to finish the thing, "I'm full and this is super thick".

Feeling somewhat refuelled, it was time for more shopping. I don't remember every place we went or what order we actually did things in, but I did get to pop into Emily Temple Cute and we all went into 6% Dokidoki. I think at Romantic Standard Smella and James bought the same collared ahegao shirt. Selina and Smella took a while browsing accessories at a hair salon while the guys and I sat on the stairs outside. At a menswear store that I don't remember the name of James bought a cool oversized t-shirt for cyberpunk looks. It was all quite interesting, and very different from the Takeshita Dori experience of Harajuku.

We also randomly walked past Design Festa and went in for a bit, which was interesting but not entirely my thing.

And we did more photoshooting! I should also mention, for all the pics of Smella check out her page or James's page, and for the ones of me, go to my Facebook!

Smella and I also spent literally fifteen minutes waiting for a toilet, because no joke, everyone in front of us in the line took at least five minutes in there.

Eventually, we were done with shopping and decided to head to the Kabukicho area of Shinjuku for dinner. But as we walked back through Takeshita Dori to Harajuku Station, we let slip the fact that we hadn't done any purikura on our trip! So naturally, a detour was made ^__^

Once we were back at Shinjuku James and I just went with the flow, and we ended up in an izakaya called Amataro. It was great to pile into a booth and sit down, and to be able to just order food and drinks by iPad. I also liked that the bill was automatically split evenly into five at the end of the meal, very convenient. The only thing I didn't like (and poor James really suffered from, it gave him a massive headache) is that smoking was okay inside, so the atmosphere was quite cigarette-y.

When we came outside we got a nice view of Godzilla, so I had to snap a photo for posterity.

After dinner we decided to go to Baskin Robbins to try some ice cream, which was nice though I have no memory of what flavour I got. Probably something chocolate! And then it was time for us all to head back to our respective places.

I did, however, get distracted by this claw game, which I lost at. Sad.

But then it was goodbye time, and as the others went into different stations James and I walked back to our hotel. We did visit Family Mart quickly for ice cream round two, which was an excellent way to end the day ^__^