Well, I suppose I really am a proper lolita now, going into the Angelic Pretty new release fray ^__^ Earlier this year I decided that if AP released a new chocolate print, I'd try and get it. And then that Spoon spread came out showing both the loveliness of the upcoming chocolate series and Loyal Rosette. And as it turned out, Loyal Rosette was released first so that sealed the deal for me. I decided to try it. My first non-lucky pack brand main piece, and my first AP.

Australia is a great place to live for buying from Japan because the release was at 1PM for me, so I was home and awake. I had decided that my plan of attack was to go for the brown JSK, or blue if brown sold out [though according to discussion on CGL brown was the least popular choice] and if they both sold out, the skirt in the same colour preferences. I also on James's advice was going to get the socks in brown. I had an alarm set for 12:45 and started refreshing the page every minute or so as the time crept towards 12PM JST. And then... it was time!

I had heard that the AP website gets pretty bad on new releases but it was awful! Pages took ages to load, and I kept adding socks to my cart only to have them disappear. In the end on James's advice I just checked out with the JSK only rather than risk it selling out while I was trying to get the socks to add properly. It was hectic. It took a full fifteen minutes to check out, with errors and slow load times everywhere. And then it took half an hour to get the confirmation email, which was worrying. But I got it, the JSK in brown. 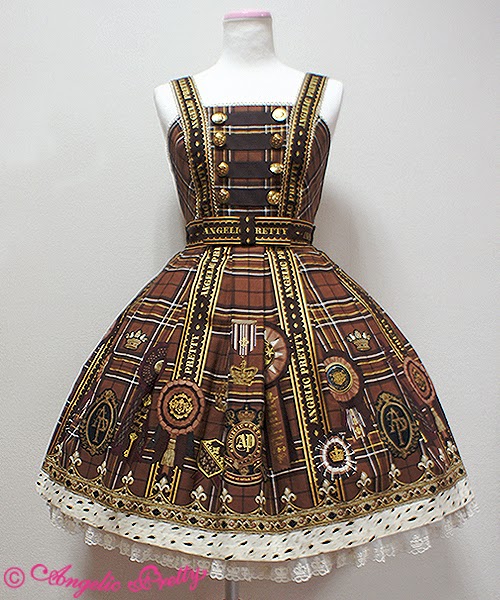 Not only did I love this design but I was also keen to see if brand lived up to its reputation of superior quality and design. I'll admit, after spending so long in the online lolita communities some of the "brand is much better" mentality has rubbed off, and I do want to have nice things like other lolitas have. However, given that for the price of this one JSK I could buy a complete outfit including shoes from Taobao, Bodyline or F+F I really wanted to see how, in my opinion, it measured up. I do want to have brand, both because I like some designs and for the prestige of ownership, but not if I didn't feel like the price increase wasn't matched by a quality increase.

So I ordered on the 16th, it was shipped to [and arrived at!] Tenso on the 21st and I paid for shipping on the 22nd. On the 23rd I got an email saying it had shipped and it came to me, all wrapped up in a bright pink shopping bag, on the 26th. I didn't take any pictures of the package or the opening, because I was feeling quite horrid after work that morning and wanted to just enjoy opening it up.

Long story short... it doesn't fit me. I mean, I fit measurement wise, it's definitely accurate to what's listed on the AP site but as a tall-ish, fat-ish, wide-ish shouldered Western girl it is not flattering on me at all. As I said to James after trying it on for the second time, I think it would work if I had only two of those characteristics going on, definitely if only one, but I have all three.

However, despite it not fitting me I still got to see what the quality of Angelic Pretty's stuff is like and it was very good. The main fabric was a cotton with a lovely texture to it and it was fully lined. The custom lace [crowns and the letters AP] was attached to the lining. The buttons on the bodice are plastic, but they're the nicest buttons in that style I've seen. The thin gold lace on the straps is quite scratchy, but I think that's inevitable with metallic trims and isn't an issue if you're wearing a blouse. The "ribbons" that make up the straps, the waist band and the detachable waist-ties are all lined as well. The straps are adjustable with a button on the bodice and three buttonholes on the strap itself. And it had the fabled AP pockets, two of them! I didn't notice a single loose thread or flaw in construction. The only "bad" thing I noticed, which isn't even bad, just unusual [to me at least] was that there was no zipper, it's a pull-over-head affair. 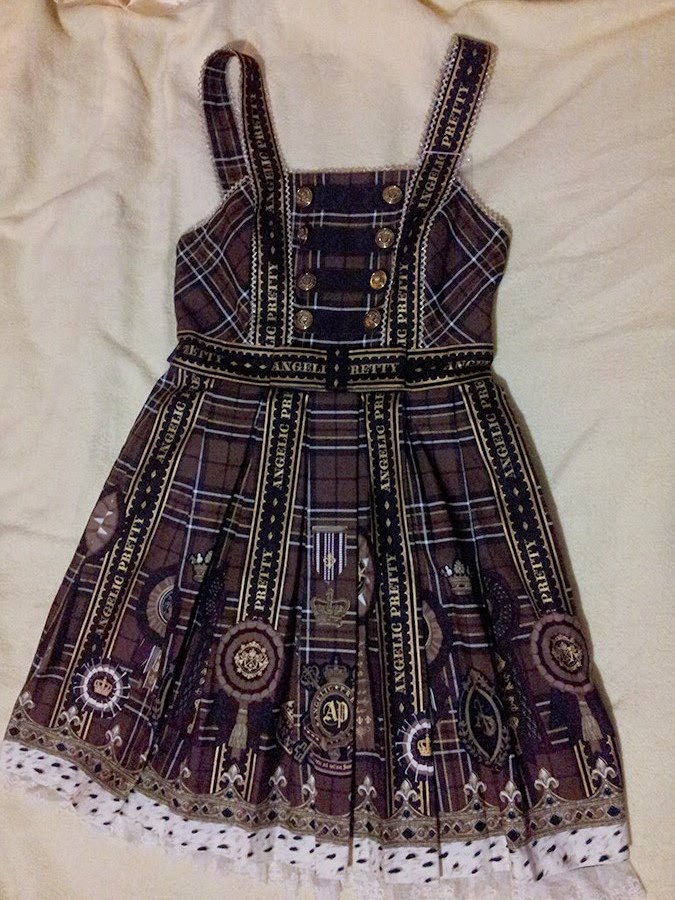 This is fairly close to the IRL colour. The stock photo is brighter than the dress really is. 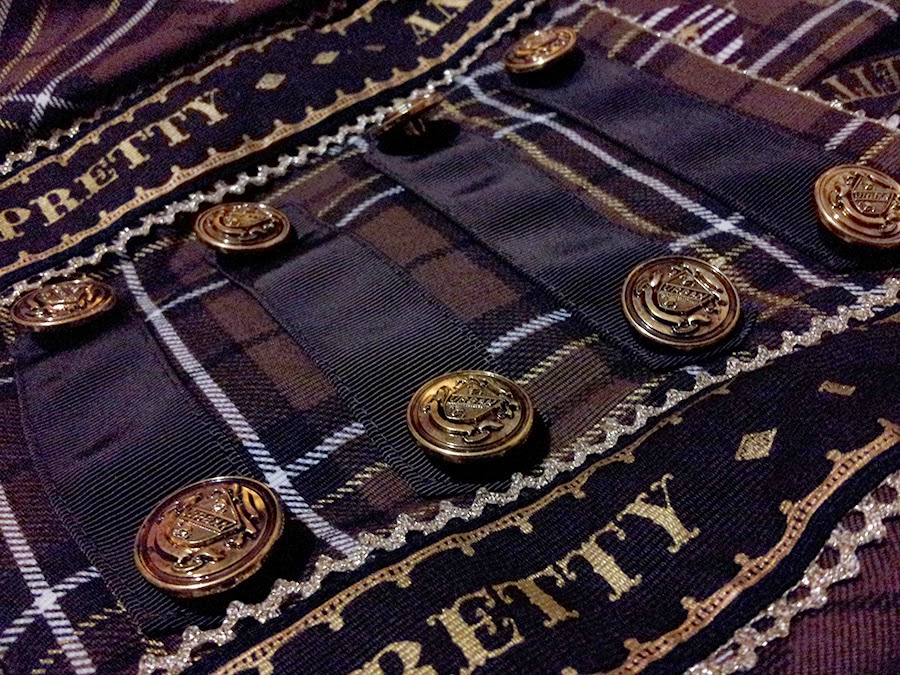 Lace detail, and a bit of the crown pattern at the bottom.

However, I'm still on the fence as to whether I think the raise in quality compared to lower-end lolita brands is worth the raise in price. This is definitely a superior product than anything else I've owned: materials are better, the print itself is wonderfully detailed, the fabric choice is great, the construction is flawless, and all the design elements work together perfectly. And knowing how much additional cost is involved in material sourcing, print design and construction I don't think the price is unreasonable at all. But for me, at this point in time, I think I'm probably going to stick with cheaper pieces. The quality difference doesn't matter to me as much as being able to have a wider variety of pieces to choose from in my lolita wardrobe.

But having said that... I think I may become a lucky pack and/or brand sale fiend. I've read online that AP and BTSSB are frequently considered the lower quality brands as far as the big lolita brands go... and if this is the lower end of brand lolita I'm definitely keen to add more to my wardrobe, just not necessarily at full price.
Posted by Roli at 2:27 pm