For this prompt I was initially going to take the easy route, and go old school or OTT sweet. But I’ve already done the latter in this series and I just wasn’t feeling old school right now, so I did a bit of googling to try and figure out what was another noticeable “era” and eventually decided to make a coord like it was 2008.

It seemed appropriate; it’s exactly ten years ago and while that late-00s time is not as memorable as the previous old school or the later OTT sweet it’s a very interesting look. It was a transitional year where things were starting to ramp up to OTT; we’re seeing some big hair and prints are coming into fashion. But at the same time there’s a lot of simplicity and “minimal” coordinates without much going on in the accessories department and a lot of simple colour schemes, of the dress colour accompanied by either black or white. There’s also still a bit of a punkiness to the fashion, and a lot more crossover with goth. The whole scene could still be called “gothic lolita” back then and it showed. 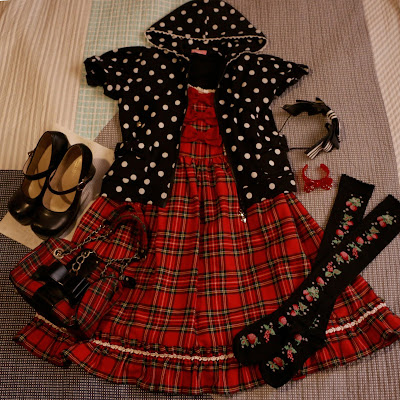 My tartan JSK from Baby, the Stars Shine Bright (or at least, another version of the same dress, which is close enough) was released in 2008 so I thought I’d use it for this coordinate. I combined it with my AP polka dot parka – this was released in 2012 but Angelic Pretty was putting out hoodies in 2008 so I think it still manages to suit the vibe. 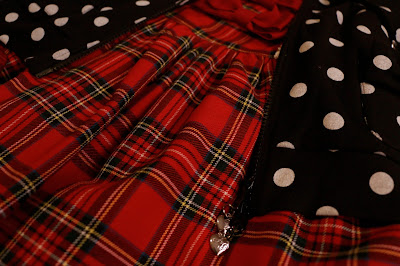 Overall I wanted to go for a cute but a little punk sort of look, not that I can ever manage to do something so properly effortlessly distressed as punk truly should be. So I went more “punk” by having disconnected, but overall coherent elements. Like my clashing red tartan bag! 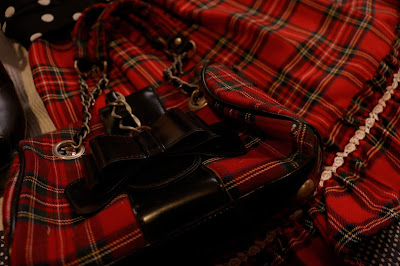 A single large headbow seemed to be one of the common hair accessories at the time so I used a black and white one (a bit anachronistic but oh well). I kept the accessories simple overall, with just a big plastic bow bangle. I would have loved to have added some arm warmers, but alas, I no longer own that later-noughties staple. 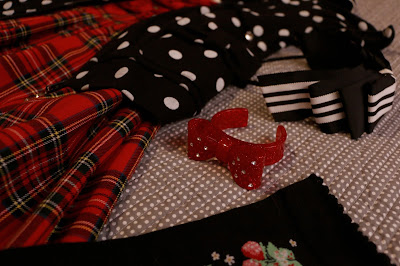 Speaking of thing I would have love to use but don't own;  this look would be perfect with some of those plain Demonia platforms but alas, I can’t own all the shoes I admire in life. I would also love to do this kind of coordinate with a pair of Converse sneakers, but mine fell apart years ago. So my plain black platform heels had to do the job! For socks, I thought a patterned OTK was the way to go, even though I do have black with white lace UTKS that would have also been perfect. But I felt that a black and red sock with a pattern not seen anywhere else in the coord was the best choice; it adds another jarring note which I felt the coord needed.

I have to say, I am absolutely loving this challenge so far because I’m trying all kinds of new things. I may not love this coordinate as much as I loved the last one I did for the challenge but still, wow, it’s not something I would normally have put together at all. The challenge is working! And I am so damn happy about it.

As a final note, I really found La Carmina’s 2008 blog archive super helpful for seeing what people were actually wearing around this time!
Posted by Roli at 11:15 am

Email ThisBlogThis!Share to TwitterShare to FacebookShare to Pinterest
Labels: around your wardrobe in 30 coordinates, baby the stars shine bright, lolita, outfit post