My lolita wardrobe five years ago and now

A little while ago I saw a Lolita Blog Carnival post "Compare Your Wardrobe from Your First Year to Now" show up in my feed from Cupcake Kamisama's blog and I immediately wanted to do this for myself. Fortunately, every January so far I have done a wardrobe post so I could just flick back to my first one in 2013 and see what had happened to my wardrobe.

Before I get into it you can view my first ever wardrobe post (after I'd been in the fashion around 6 months) here on EGL And if you want to see the 2017 post for comparison, that can be found here. Of course there have been some changes since that last post but they're mostly been additions! Just so you can follow along with what I’m rambling on about ^__^ 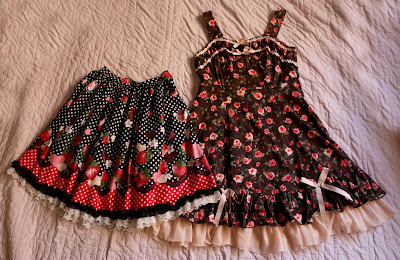 The only big things from my first year in lolita that I still own.

My first thought in looking back to that first wardrobe post is that the only things that remain are most of the shoes, a single JSK and a lone skirt. What a change! And I know exactly why I got rid of all those starter pieces too. I was lucky and James bought me a whole bunch of stuff when I first started, but I really had no idea of how I wanted to wear lolita. So I got things that were cute and that I liked, but in the end a lot of them weren’t things that felt right on me. That’s why I actually think that a new lolita, even if they can afford it, shouldn’t buy too many items to start with. Buy an outfit or two and see how you feel wearing them, because otherwise you may end up with a whole lot of things that you then sell on quickly.

Once thing I’m pleased about, looking back, is that even then I had some sense of wardrobe cohesion. I have multiple blouses in different colours and several different colours and style of footwear. I think my legwear and headwear collections were pretty lacking but still. I was trying even if I wasn’t, by my standards now, doing that great a job of it.

Also, as a note, the majority of Bodyline blouses suck. Sweaty polyester nastiness central. I have one good cotton one that’s in my sewing pile for some alterations and I like my two chiffon ones but other than that I've been very unimpressed. 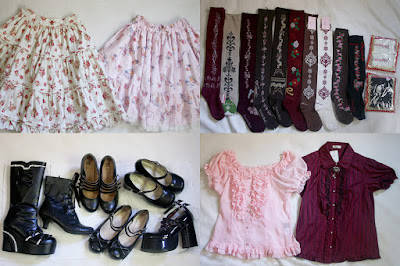 Moving forward, 2014 was the year where I really found my feet, I feel. Looking at my wardrobe post from January 2015 reveals something that resembles my wardrobe now. Not as large, not quite as spot-on in terms of quality, and still a bit sketchy on style, but you can look at that and then look at my wardrobe now and tell they’re the same person. You couldn’t do that with my wardrobe when I first started! And now I feel like I’m in a really great place with my wardrobe; it’s cohesive and varied and I love it to piece ^__^

Other than quantity and cohesiveness something I want to write about a bit is the presence of brand in my wardrobe, because this is something that has changed as well. When I first started, I thought brand was expensive and too small and therefore immediately in my “nope” pile. And to an extent I wasn’t wrong. A new brand JSK costs $350 (in AUD and of course this fluctuates, especially since the exchange rate keeps getting worse for me!) and a blouse is $120. That’s a lot compared to say $40 and $25 from Bodyline, or $80 and $40 from a Taobao reseller (those are all ballpark figures, obviously). And in both size and length most brand items are designed for a Japanese woman  and even if lolita is apparently a chubby girl fashion, Japanese chubby is smaller than Aussie chubby! But despite being somewhat right I was also quite wrong; I’ve scored amazing deals secondhand and a lot of things fit me, even though I’ve gained weight since I’ve started. Brand was never unattainable and I regret that I felt like it was for a long time. 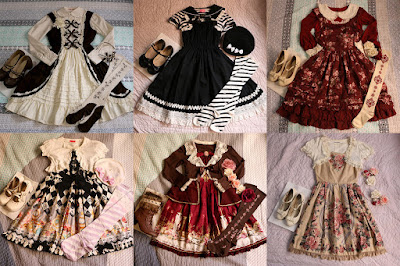 Some of my recent(ish) mostly brand flat lay coordinates

Further to that, something I’ve come to realise is that if you exclude brand from your wardrobe for any reason you really are missing out on a lot of what lolita has to offer. And I don’t mean that in terms of quality (though that does play a role) but merely in terms of variety. Things like prints are obvious – you can only get an AP print from AP (let’s not talk about replicas) – but also things like OTK socks are something I’ve found at you can’t really find at the same level outside of the big lolita brands. And on the flip side, I think that people who avoid buying from Bodyline or Taobao or western indie brands are also missing out! My point is that there is a huge range in lolita and with so much to choose from I think you shouldn’t buy something, or not buy something, just because of where it comes from (except for reasons of being an ethical consumer, but let’s not go into that). Not buying brand because it’s expensive, or avoiding Bodyline because it’s cheap, are to my mind silly reasons to avoid having things you like in your wardrobe, and I’m glad I’ve come to learn that.

So all in all my lolita wardrobe has come a very, very long way since I started. I know my style now, I buy the things I like regardless of their source, and I’m keen to see what it looks like in the years to come!
Posted by Roli at 2:49 pm