As I mentioned in my coordinate round up for July to September I recently did a lolita shoot, modelling with Angie and photographed by James. So of course, I am now sharing some of the final photos! I’m just picking a few favourites here, but the whole shoot will go up on my facebook page and you can also see the photos from the epic steampunk look (Trains! Weapons! Drama! Occasional hand-holding!) we did on the same day there. 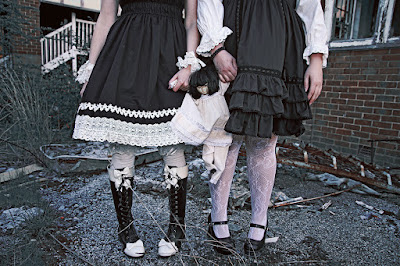 I have to say, first of all, James did such a great job on these! They are eerie and twisted and exactly what I wanted! The creepy doll was his idea as well, and she really added to the atmosphere of these photos. As always, Angie was a pleasure to pose with and I’m also very happy with how I styled us both. Despite owning a lot of black and white old school style lolita things doing two outfits that both looked good and worked well together was a bit challenging! There are a few things in the styling I’d possibly change if I could but overall I just loved how everything worked. 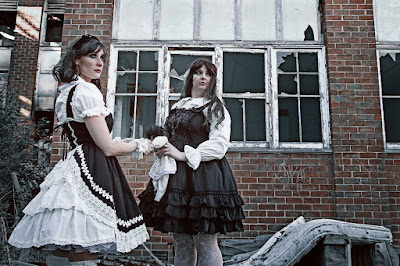 This location was also utterly perfect. I’m about as un-superstitious as a brick so abandoned places never creep me out, but I’ve enjoyed telling everyone since then about how you could hear doors creaking open and slamming shut everywhere while bees buzzed around the hive they had made in a broken window. It was, in a word, delightful. A perfect location.

Did I mention that it was actually an orphanage opened in 1913? The building fell into disuse in the 90s and since then has suffered several fires. It’s beautiful and derelict in all the right ways, and it was so good to finally do a lolita photoshoot in a location like this. 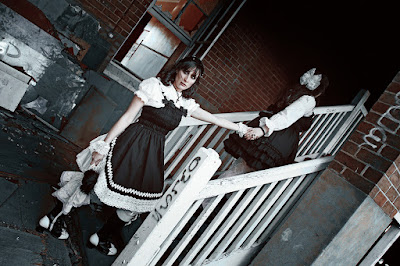 Anyway, part of me feels like I really should be weaving a tale of sadness and mystery to accompany these pictures, but the fact is that I have a lot of fun modelling and even when the final result is somewhat sombre the story behind it all never is! So I hope you enjoyed the photos and reading a little about the shoot.