I was on a roll with lolita these past three months! I wore 8 lolita outfits for a bunch of different reasons, and I'm excited to share them all with you. September in particular was my lolita month ^__^

The first time I wore lolita in this quarter was at the end of July for the Newcastle lolita picnic meetup, which I posted about here. 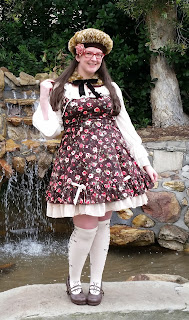 I really enjoyed this outfit! It was quite simple in a way, but very me - brown, floral, fawn fur…what’s more me than that? I also enjoyed how this outfit morphed from my first idea that I actually tried laying out as a flat lay. 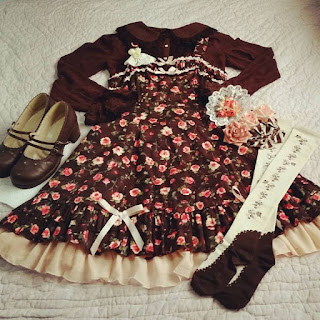 To be honest, I changed the blouse because the brown one was too tight on my arms at the time and then, with that changed I thought I may be able to add some fawn fur, which didn’t quite work with the brown blouse. So in the end it looked pretty different but I think I liked it even more!

And, in case you didn't see the post I actually put this coordinate in a CGL draw thread and received some amazing drawings!

In August after I got my July haul in I decided to wear Berry Stripe to work on a casual Friday. This is not really a proper lolita outfit because I couldn’t find my petticoat in the morning so there’s no poof as well as being super simple! But one of my goals for this year was to wear my lolita items more, even if it’s just in non-lolita outfits, so I did and I’m sharing it ^__^ 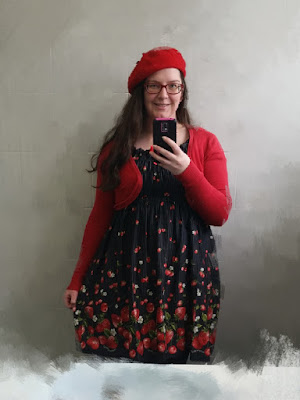 I couldn’t fit my whole self in this (work bathroom mirror) photo, but the bottom half isn’t interesting anyway, just black tights and black flats. I still felt so happy and cute wearing this to work though! I even took a selfie on the train! Public selfie taking is a rarity in Roli-land… 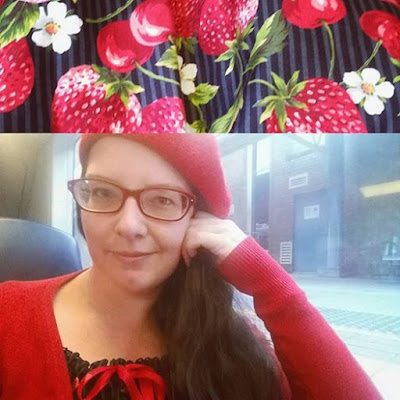 Then I started September off the right way by wearing lolita to work on the first day of the month! Not much to say about this outfit really, but I got some nice compliments on the skirt and my weeby co-worker recognised it a lolita. My friend/housemate/workmate Natalie was lovely enough to take photos for me as we walked into work form the train station. Due to being all black I've lost a bit of detail here, but I enjoyed wearing this outfit! 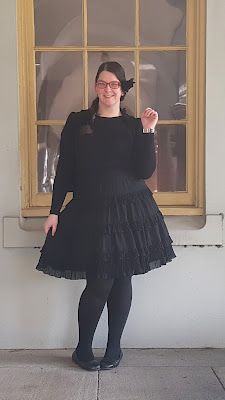 On the third weekend in September I achieved a personal record - I wore lolita on both days of the weekend. Well, for the parts where I couldn't stay in my pyjamas, that is!

On the Saturday evening I dress up cute to go play Cards Against Humanity with James and some friends. It was a great night and I got several outfit compliments too! And of course, CAH was the usual horrifyingly funny experience ^__^ 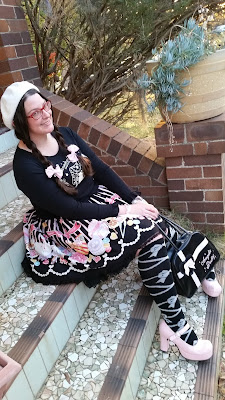 I really enjoyed this outfit, and loved being so damn cute. Black x pink x white is love ^__^

Though, when James was taking outfit photos for me I managed to make such a terrible facial expression I just had to share... 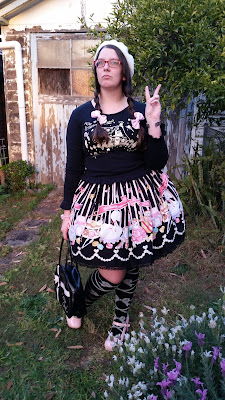 The next day James and I went out in the morning to check out a local photography studio we will probably be using in the future and I decided to dress up again. I only had 20 minutes to get ready so it's quite a simple outfit but I rather liked it. 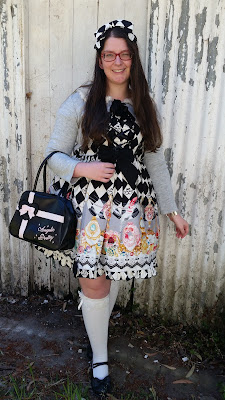 Then I wore Berry Stripe for work on a Friday again in a more properly lolita way. Nat was kind enough to snap a photo for me again, and I got compliments from workmates and the lady working at the Red Cross (Nat and I did some spontaneous op shopping on the way to the station after work) said she loved my dress. I also ended up putting my hair in a low bun which I think actually looked a heap nicer than just loose but didn't grab a photo at that time ^__^ 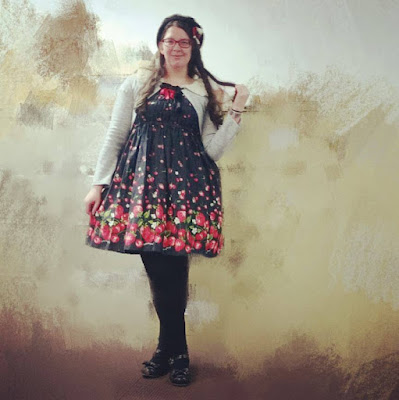 I kept the ball rolling that weekend when James and I spontaneously went to visit one of my sisters on the Sunday. We were in the middle of a heatwave so I ummed and ahhed about wearing lolita, but decided that since I was going to be sticky and uncomfortable regardless, I may as well be sticky, uncomfortable, and cute! So I wore a very casual outfit that would survive some rough and tumble with my nieces and nephew (turned out to be only one niece home...much easier to manage) and though I didn't love the outfit it was still nice to dress up. 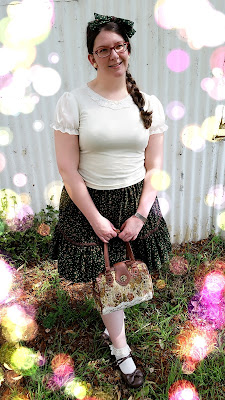 I also have a bonus photo cuddling one of my sister's bunnies ^__^ This was entirely James's idea, and stolen from his Instagram. Gotta love it when your partner has better lolita photo ideas than you do! 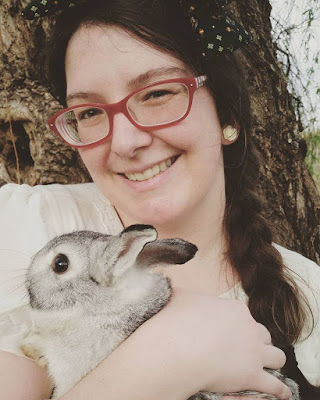 And then I saw the month out with a bang. On the last day of September James and I did two photoshoots with Angie, a model friend of ours, and one of the two looks was a lolita one! I got James to snap a quick shot on my phone so I could share it here with an outfit rundown for both of us. 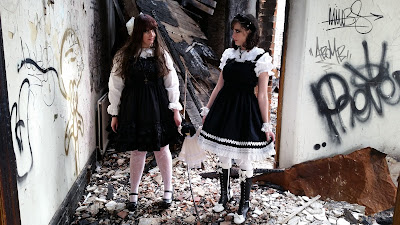 My JSK, both shoes, Angie's OTKS: Bodyline
Angie's JSK, both blouses: Baby, the Stars Shine Bright (got to put her in Shirring Princess!)
My headbow: Meta
Everything else: Offbrand/taobao

Of course I'll be sharing the final photos here since they're on topic for the blog, but if you want to see them first and also see our super awesome steampunk photos as well - complete with genuine steam trains, mind you - I suggest following our facebook pages.

So those are my latest lolita outfits! I'm really, really pleased with how much I was able to wear lolita, especially in September, and also that I participated in the community more and did a photshoot! And I'm keen to see what the rest of the year holds  ^__^

Oh and PS today is my birthday! Just thought I would mention that since it'd feel weird if I posted on my birthday and didn't say anything, lol.
Posted by Roli at 1:51 pm