Last Sunday the Newcastle Lolita community held another meetup and, of course, I went! I wanted to write a bit more of an in-depth meet up post this time around, so prepare of a bit of a long one!

I was running a tiny bit late (because it took me longer to do my hair than expected…whoops) but got to the chosen café in the early afternoon; James was a sweetheart and drove me there and back, which was much nicer than taking the train. We also had really fantastic car conversation, it was actually kind of a bummer to get to the meet and have to stop talking! But arrive we did. James had to double park to drop me off so I grabbed my bag and quickly scrambled into the café. The waitress at the door knew exactly where to direct me, based on what I was wearing. Got to love how distinctive we lolitas are! 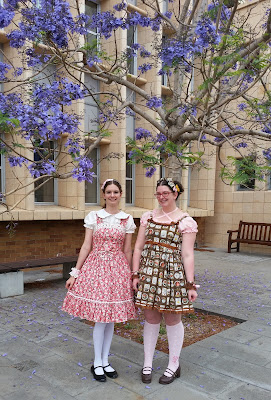 Took this later, but sharing it now...

I joined Rosie at the table she had booked (bless this girl for getting the ball rolling on the community again) and we sat and chatted for a while as we waited for our third confirmed attendee to show. But unfortunately she didn’t, nor did the girl who said “maybe” on facebook, so after waiting a while we decide to just go ahead and order. We both got the soup of the day (potato and bacon) which was insanely nice, along with some pretty and tasty frappes. Still on our own after we were finished we decided to wander down the street, which is Newcastle’s sort of trendy café strip, to find a good place to take outfit photos. 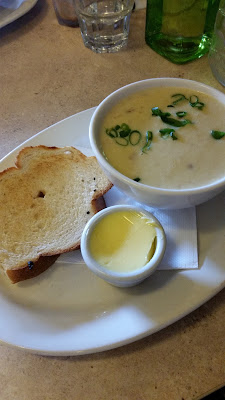 Yes, I'm the person who takes photos of food. all. the. time.

As we walked I peered around at all the different shops, and jokingly said that if we passed a second-hand bookshop I’d have to go in...and what did we pass? You have one guess about what happened next! I tried to exercise some self-control, but that went out the window really quickly and I ended up with a big bag of 8 sci-fi and fantasy books. I just really like books! It was good/bad timing in a way, because on my birthday which was the Wednesday prior, James took me to a bookstore and let me loose, which resulted in the purchase of four new books, so now I have a really, really big stack of books to read. Which is great, I’m a massive nerd and have not satisfied my desire to read anywhere near enough this year. Part of me feels bad about getting so many books, but mostly I feel incredibly chuffed about it. 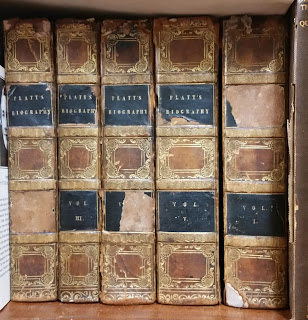 Then, laden with books, we headed further down the street to find a good photo spot. We were heading for the park where we held the last meetup when Rosie spotted a gorgeous jacaranda tree flowering in front of the city library (or at least, I think it was the library, whatever). The pretty flowers in front of the hard lines of a city building were really pretty to me, so I took on the role of photographer and directed Rosie to stand under the tree and pose. But then, we heard a voice as a man walking by said “do you want to be in the picture too?”. So I handed off my phone and he took some photos of both of us! It was so nice and so random that this happened – thank you friendly random bloke! I call him a bloke because he seemed so typically Aussie; khaki shorts and shirt, slightly weathered skin, and exuding friendly cheer. I don’t think he even commented on our clothes, which happened a lot wherever we went that day.

With the group photo taken care of so quickly we took outfit photos of each other and before we knew it we were done, and still had some time left before James was due back to pick me up. So we decided, since we were literally right there, to visit the Newcastle Art Gallery. The kind lady at the welcome desk let us stash our bags behind the counter and off we went to look at the art.

Now, I’m not really an art person. I love photography and modelling, and approach that as a form of art, but in my experience the actual exhibition scene is full of as much wankery and bullshit as it is genuinely amazing works. So I went in expecting to be judgemental but was pleasantly surprised to really enjoy myself. So much so that when James called to let me know he was only a few streets away Rosie and I still hadn’t finished looking at everything…and it’s not a huge gallery! I will say though that there were certainly some pieces that really annoyed me but there was also a lot of truly amazing and beautiful stuff.

I’m not going to talk much about the art but I do want to share a couple of things that I especially loved. First of all, this painting from 2017, entitled Woman with a mullet. 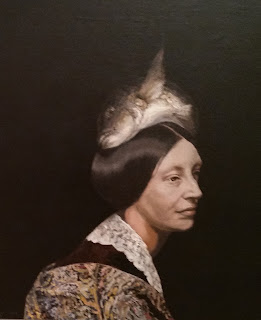 Everyone I have showed this to has laughed. It’s brilliant.

On the second level of the gallery was an exhibit of works by the late Mazie Karen Turner, along with some of her photos and notebooks, and I loved them all! I’d especially suggest looking up for Blue Prints works – they were astounding in person. 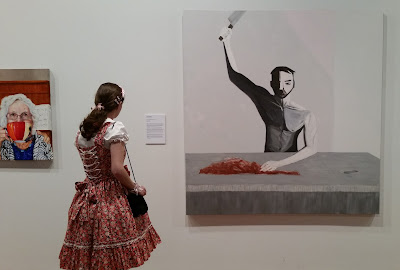 While we were looking around I was sneaky and kept snapping photos that I was calling “Rosie in the wild”. I just really love pictures of lolitas doing things while dressed all cutely, so I took a few of her looking around the gallery. And then, because I like the results so much, I handed her my phone and asked her to snap a couple of me while I was looking at my favourite bit of the Mazie Turner exhibit. Much as I rant against wankery, I am a wanker myself at heart. I just don’t pretend it’s art! 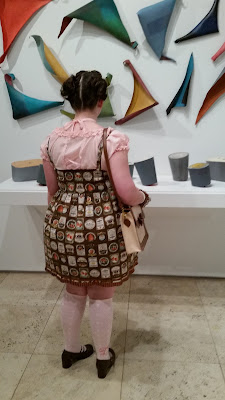 While we were in the gallery we were approached by two middle-aged women who were curious about what we were wearing, and later on one of them asked to take a photo of us. That’s a first for me! I haven’t been approached for a photo while out in lolita before and I’ll admit it made me feel kinda happy and special ^__^

The time in the gallery flew by and James called me before I realised the time had passed so Rosie and I made a hurried goodbye and I made my way back to the café to get picked up. James and I picked up our car conversation where we left off and soon enough we were home. I happily removed all the layers lolita requires and morphed back into my usual self – wearing pyjamas and playing computer games.

So with this meetup, that makes three I’ve attended so far this year…I’m really pleased with that! Even though it was just Rosie and I for this meet it was great to spend some time with her and hopefully soon the Newcastle community will have a few more active members so we can continue to frill up the joint!
Posted by Roli at 1:49 pm