Time for some outfits with the third main piece from my July auctions haul! You may recall I had previously mentioned a desire for a black skirt with a fully shirred waist and I’m really happy that I found such a beautiful one. 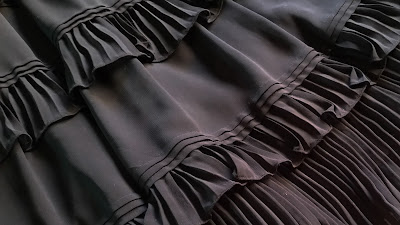 I haven’t been able to ID this piece but I’m actually pretty sure it is technically an underskirt, since Victorian Maiden has sold underdresses which have identical detailing in the skirt portion. But regardless of what its original intention was it makes a beautiful skirt on its own and if I can also layer it with other main pieces for a bit of extra length then that’s just an added bonus. It has gorgeous details and isn’t sheer or anything, so I feel it can work either way.

Before I go onto the outfits I wanted to apologise for the picture quality! On the day I took these I only had my phone to use, and black is always a challenge to shoot indoors. I hope you like the outfits even if the photos aren’t too great. 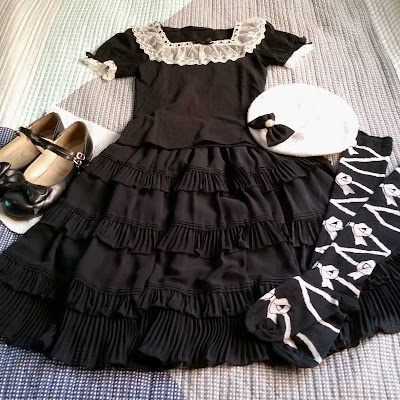 For my first outfit with the skirt I really want to try combining it with my new Innocent World cutsew from my other recent haul and it worked out just a well as I imagined. I was aiming for something super simple, maybe a bit…not quite old school, but mid-2000s, I think? I’m not quite sure what inspired this look but I really like it! Ten out of ten, will wear. It’s very me – the pieces and coordination are quite basic, but combined there’s enough detail going on that it’s not boring at all. 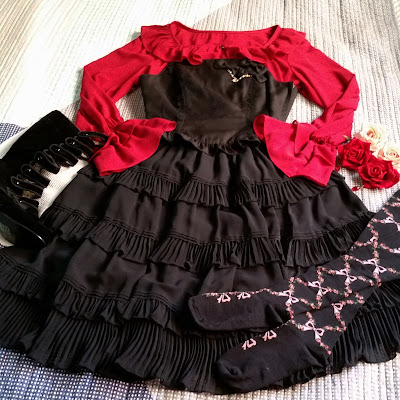 Then for the second outfit I really wanted to try it with my red blouse from The Floral Notebook and thought the IW bustier was a good idea too. The socks I’m not totally sold on, in the end, but I think I have the bones of a very cool outfit here and I have a hunch it’s one of those things that would look way better on than laying flat. 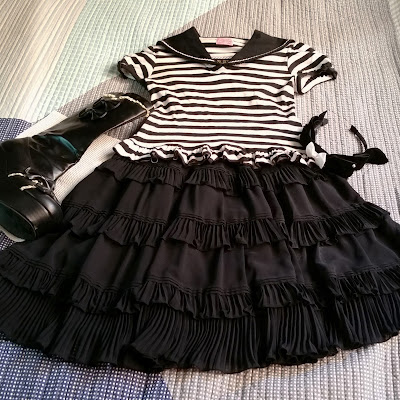 Lastly I wanted to go totally sweet and I feel it worked out okay; it would probably look cute worn but it’s a bit dull as it is here. I think this skirt also leans too far classic to be used in fully sweet looks, which is a pity, but I’ll see if I can make it work!

You may notice I didn’t do any 100% black looks and that’s entirely due to the fact that they would just turn into black blobs in the photos. All black is honestly the way I would be most likely to wear this skirt so I don’t actually mind that the only flat lay here I’m head over heels for is the first one. I think I’m still going to get plenty of wear out of this skirt!
Posted by Roli at 12:59 pm