I've been pretty good about not spending much on lolita this year but recently... well, my hand slipped a few times on Yahoo Japan. I actually got outbid on a few items as well, most notably some socks lots and a BTSSB fawn fur beret which was a real bummer, but especially given how awful the exchange rate is for me right now it's probably for the best.

Anyway, I ended up with a JSK-apron-headpiece set, two red-and-white cutsews and a little something that will either be part of a giveaway, or a Secret Santa gift if I either sign up for the CGL one or actually woman up and go to my comm's Christmas meetup.

As usual I used Buyee, and have nothing to say about their service that I haven't covered before. So, onto the clothes! 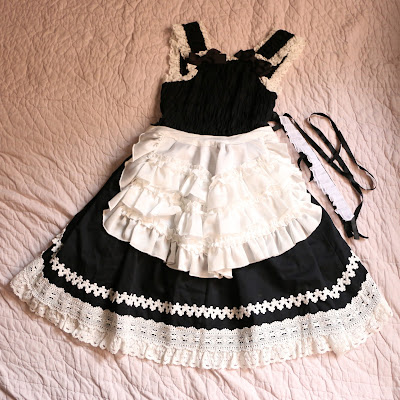 I know it's bad photo, but anyway, this is the set! The JSK is BTSSB's Shirring Princess (or Princess Shirring, I don't even know) and the apron and maid-style headdress (which kept folding in on itself in the photo) are both from Marble, which is a brand I know nothing about. The Marble items are good pieces to have, though they will probably have more costume/photoshoot use from me than actual lolita wear, but that's fine. 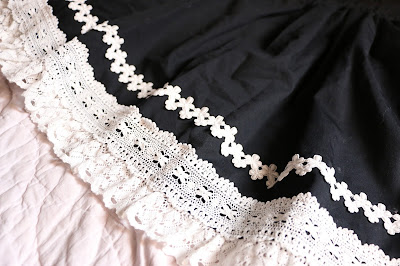 I have to say that Shirring Princess is really beautiful, the laces in particular are lovely, and because this is such a classic, perennial lolita piece I really get a kick out of owning it. It is also my first dress with a bustle back! However, I am iffy about how I like full shirring on me so I'll have to try wearing it a few times before I can make the verdict of whether I will keep it or sell it in the long run. But for now, it really is making me happy to have this dress. 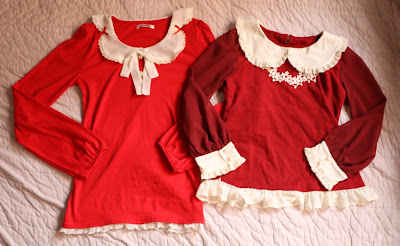 The place where my hand really did slip was with these two cutsews, from a brand called Mary Rose on the left and Angelic Pretty on the right. What happened is I saw the AP one, liked it, and immediately put a starting price only bid on it, thinking I'd get outbid and could then decide how badly I wanted it. Then I came across the Mary Rose one, which was cheaper and I thought was likely to fit me better, so I did the same with that. I did feel a bit silly, bidding on two such similar items, but I really did think someone would outbid me on one of them but no-one did! So I won both!

However, when I got the package I was really happy to see that in real life they are quite different in colour and style, and that they both work with my wardrobe in different ways! Neither of them fit perfectly, but I am working on losing weight so hopefully soon they will fit better.

So that's my October haul! Have you bought anything interesting lately, lolita or otherwise?
Posted by Roli at 3:43 pm