Have I discovered the perfect lolita wardrobe formula?

When recently starting to do some posts in the Wardrobe Challenge series again I found myself looking at main pieces and, for example, headwear and going "well, there's two different options so that's fine" which led me to a thought and now, an experiment.

The thought: That perhaps the perfect way to build up a lolita wardrobe is to ensure that every main pieces has two of everything (tops, shoes, legwear and headwear - again I'm not touching accessories because that's really more a personal taste thing, and I think one or two neutral bags are all you really need) and if that number is met, all will be well.

The experiment: Just as it sounds - giving that a go! I didn't test this idea before writing the post, I'm literally writing this on the fly so let's see how well it works!

First up, I selected five main pieces by website hopping and saving pieces I liked. I deliberately didn't chose my main pieces with the intention of creating a cohesive wardrobe though things did end up matching somewhat which I think shows my personal preference a bit! The only thing I did was make sure I had one OP and one skirt in the mix, because I naturally tend so dominantly towards JSKs and I wanted to give this theory a proper test.

Above are the main pieces I decided to work with, and work with "chronologically" - meaning I picked complementary items for the Meta strawberry JSK first, then the AP mint affair next and so on. As I went through the pieces in this way if I already had something that matched, I'd use it as one of the two items in each category.

I put together outfit collages to illustrate my selected pieces to go with each main piece, so here we go!

I really treated this JSK as if it was the first lolita thing I'd bought, what with the matchy-matchy headwear options. The first two outfits display all of the clothing options, while the third shows an additional outfit made from those pieces. So far, this theory of having two of everything to match a main piece is working - if this is all you have in a lolita wardrobe you'd still get a few different looking outfits.

Now here on main piece number two I've discovered a proviso of sorts, or a clarification if you will. By "two of everything" when building from scratch I think I mean the makings of two distinct outfits - as you can see when using a non-print piece what you decide "goes" can really be anything rather than having to draw from the print. However, in an established wardrobe when you're just looking for gaps or ways to improve I still think checking that you have at least two of everything to go with each main piece is definitely the way to go.

As you can see, I re-used the white blouse and boots from the first main piece, but still added lots of of new pieces to mix and match with and the brown is definitely taking it in a very distinctive direction.

Working with main piece number three the first outfit introduces all new supplementary pieces, while outfit two I've re-used the blouse and shoes introduced to go with the AP JSK. At this point, if forced, I could have re-used some of the pink pieces that went with the first main piece, but I felt that was less of an obvious match and more of an experimental look so I chose to have new pieces instead.

That decision was a bit challenging for me, as I try to be a very versatile "use everything with as much as you can" person but I really wanted to test this idea of having two distinct outfits worth of clothing per main piece and test it properly.

This Bodyline OP is in the same colour-scheme at the previous skirt, but as it's an OP I introduced to new outerwear options. Again, what I said above about potentially incorporating the existing pink pieces applies. They would match, but not well enough for me to want to use them. Besides, I already re-used both legwear options from the IW skirt as well as a pair of shoes and a hairpiece so there's is comparatively little "new" being added with this main piece.

Lastly I just fell for this old-school Baby JSK and had to include it. As it's a different colour altogether than anything else, nearly everything that makes up the two outfits. Also, just putting it out there that I know the blues don't match perfectly but let's just pretend they do, alright? This is theory testing, not perfect colour matching!

So those are all the pieces I added while working chronologically on the idea of having two distinct outfits worth of complementary items for each main piece. I've collaged them all together below. 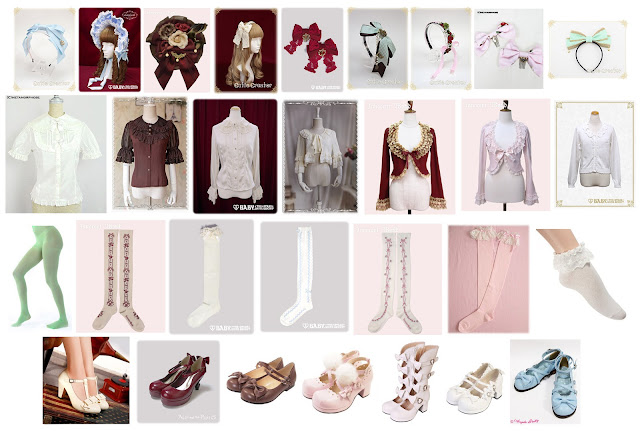 Oddly enough, I ended up with seven each of tops, legwear and shoes as well as nine headwear options for the five main pieces. Given that I'm all of having more complementary pieces than main pieces that works well with my usual approaches to wardrobe building.

And as you can see below, once the whole wardrobe is made up, there are even more coordination options for each main piece - some of which are more experimental and some of which are just different from what I initially chose to run with. And I could make more - for example mint and brown with the strawberry JSK would be adorable, and the IW skirt and Bodyline OP are so similar colour-wise that anything that work with one main piece will work with the other.

Overall, building a hypothetical wardrobe in this way had me arrive at a different place to where I would have if I sat down with the five main pieces in mind from the start and came up with pieces that would complement all of them. One example of this is that if I knew exactly where the wardrobe was going when I started I would probably have not included the pink shoes to go with the Meta JSK, as the white shoes are a more versatile option. Similarly, I would probably have chosen less but more neutral headwear options. However, the end results are largely the same so I can make my concluding statement:

When building a lolita wardrobe if you ensure that you have enough complementary pieces to make two distinct outfits with each main piece, you will be able to develop a well-rounded and versatile wardrobe even if you don't stick to a colour scheme or plan your wardrobe in advance. Of course, sticking to a general main style or colour scheme helps with this, but it is not essential. Similarly, if you're trying to refine an existing wardrobe, ensuring that you have at least two of each clothing type to match a main piece helps you get the most out of your wardrobe.

What do you think? Does this seem to be the perfect lolita wardrobe formula I think it is?
Posted by Roli at 3:37 pm