Well, "never enough socks" is just ym opinion... says the girls whose OTK storage box is overflowing despite very rarely wearing any of them. I never said that my posts in this series would be devoid of my personal fashion bias.

Anyway, enough rambling (isn't this blog aptly named?). As you can see, after a very long time of not doing this, I'm returning to the Wardrobe Challenge series, this time with the wardrobe of fellow lolita blogger, the lady being Adventures of a Drop Bear Lolita. As usual, lets start with the pieces she showed me she already has. 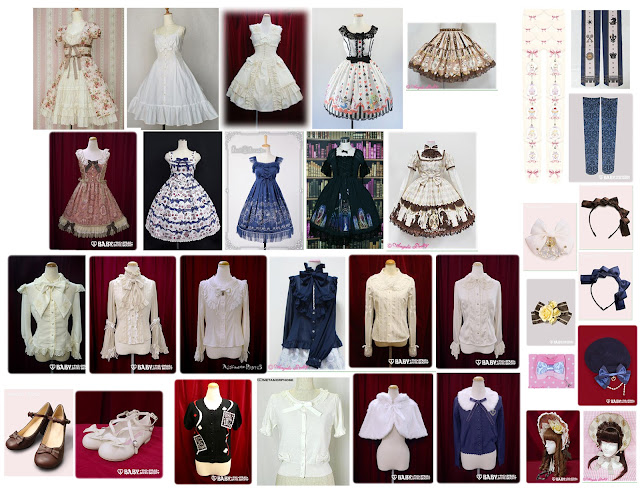 Overall, she has a very cohesive collection, especially in terms of colour scheme. The first thing I notice is that the legwear section needed bulking up with a few more options (hence the title of this post). There is also a lack of short-sleeved blouses but being a follower of her blog I know she is aware of this so rather than adding in some short-sleeved options I made the assumption that getting Australian-weather appropriate options was already on her to-do list so instead, as usual, I focused on plugging the noticeable gaps instead. 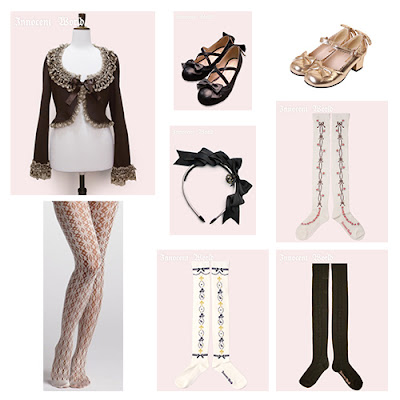 I didn't feel like there was much "missing" from her wardrobe, but what was missing I felt was very important - the black items in particular, though the bolero, additional socks and gold shoes also add a lot of versatility. I feel like a few more leg- and head-wear alternatives further to what I've suggested above would also be good, but this is enough.

As usual I've put together three outfits for each main piece to show the different ways they can be coorded with the existing and additional wardrobe options.

First up, one of BTSSB's classic solid pieces. This was naturally super-easy to coord in a variety of different ways.

Next up is one of two reasons I added in the black pieces to my suggestions. This JSK is far sweeter than the rest of the wardrobe, but while only adding a few smaller pieces it can now be worn is several different ways.

This dress is gorgeous, and having the matching bonnet made for easy coording of headwear. However, there wasn't really much legwear that match so both the tights and OTKs used here are my additions.

I fell in love while coording this dress. Navy isn't usually my thing but navy and brown is apparently something I am really keen on!

With the print on this JSK being in only a single colour it basically counts as a solid coloured piece and thus lends itself well to vairety.

And this OP is the other reason I had to suggest adding some black. I'm not sure how well the outfit with navy would work out IRL but I think it should be nice with the colours in the print.

I used to really love Chess Chocolate when I was getting into lolita. It's just so damn cute! The socks in the middle coord don't match 100% as they have the subtle pink floral pattern, but that could be solved by adding a pink floral clip to the headbow.

This is an overdress, not a full dress, but she does have a simple underdress and I feel it may also be great over the first BTSSB JSK as well for a different look. It's a lovely and versatile dress and that's really all I have to say about it.

Lastly, we have the lone (and adorable) skirt. Like with Chess Chocolate, in the centre coord the socks again aren't a 100% match due to the floral motif but as I explained above, you can fix that easily.

This wardrobe is a perfect example of how sticking to a colour scheme can really make coording easy. Though I did feel a few more additions were needed, by and large the big building blocks of the wardrobe were already in place and just a little fine-tuning was needed. It was really fun to do this again, after nearly a year since the last one, ad I am once again happy to take requests to analyse and make suggestions on wardrobe of less than twenty main pieces.
Posted by Roli at 12:01 pm