Look at me, stepping up in the lolita world, buying brand. Well, if you've seen my Angelic Pretty review you'll know I've bought even more burando, but this sock saga [and yes, it is a saga] started back when Loyal Rosette was just a glimmer on the horizon...

A while ago, when Innocent World updated their website and their banner mentioned a summer sale, I started getting excited. I had my eye on a few things and had decided that if certain things had a certain amount off, I would get them. Well, it turns out none of the things I wanted went on sale, except for some socks that I thought would help round out the classic side of my wardrobe. But I didn't just want to buy socks... until we celebrated Christmas in July, and James got me them as a gift ^__^ 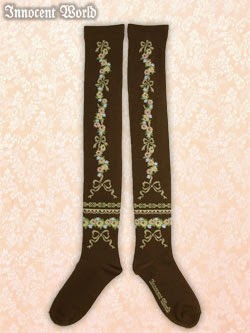 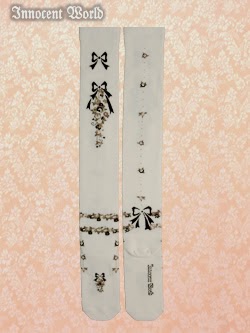 I placed the order on the 25th of July and received the automated email reply. Ordering from their webstore was incredibly easy, and they have a great guide on how to do so on the site. Based on what I'd read online about IW's response time, especially during sales periods, I was pleased to get the follow-up email on the 31st. I had originally ordered three pairs of socks, but they told me one pair was out of stock and said I could cancel the order or add more items if I wished. I asked to just go ahead with the rest of the order.

On the 1st of August I received the PayPal invoice, which I was glad to see was itemised, and paid immediately. On the 7th I received an email which said it had been shipped on the 5th. They also apologised for the delay in giving me that information and gave me a tracking number.

I got my package on the 8th, which I consider an excellent turnaround time. However, when I opened the package I noticed that they had sent me Marionette Theater OTKs instead of the Versailles pair. I immediately sent an email letting them know, and double checked the PayPal invoice and the one in the package to make sure the order hadn't somehow gone through wrong but it hadn't. I had hoped to get an email back the same day since their English office was open that day but I didn't. On the 18th, after there had been two open office days, I sent a follow up and soon after got a reply to my original email.

Basically, they said that the warehouse had made a mistake but fortunately one of the store had a layby for the Versailles socks cancelled and they were being sent to the head office. They also apologised and asked if I could send the Marionette Theater socks back to them via COD or if not they would refund me postage via PayPal. So I went to the post office in the 19th, but unfortunately you can't send via COD outside Australia and postage was $13, and James and I deliberated, because we weren't sure if they'd be willing to pay so much for postage and I was unwilling to be out of pocket if that happened.

Initially, we decided that the easiest option would be for me to keep the extra socks and ask IW to invoice me for them. Yes, that meant I'm still paying for socks I didn't want but I actually have them and they may make a nice gift for a fellow lolita, or I can sell them. But then I had the bright idea to tell them COD wasn't an option and to check that they were okay to refund $13 for postage. So I emailed them saying that on the 21st and got a reply on the 28th again apologising for the delay and telling me they couldn't refund me for postage in advance but hopefully it would come with a postage sticker so they could refund me when it arrived.

At this point I decided to revert to the original plan: buy the additional socks. So on the 29th I emailed suggesting that and asking about the status of the original Versailles socks. I got a reply a few hours later saying that they would send them out when they received the Marionette Theater socks back. So I sent another email saying more definitely that I would like to buy them, so please send me a PayPal invoice so I can pay and then send the Versailles socks. I was a bit clearer and more polite than I was just then, though ^__^

I received the following on September 8th: "We must be proud if you like the Marionette Theater socks, but are you 100% alright about taking the socks which ought to get through to you originally?" This confused me, as I wasn't sure what would happen with the Versailles socks and after chatting with James I decided to just leave it and not send a reply. I know that's a bit bad of me, but it was stressing me out. So I'll be selling the Marionette Theater socks sometime soon.

Overall, I'm not too happy with their customer service. I am aware that IW have no way of knowing if I'm a scammer or anything and thus wouldn't want to just send me the Versailles socks, but it was their mistake and it annoyed me that it was complicated to fix to the point where I gave up. Having said that, I do know I could have been more trusting and jut sent the wrong socks back. Also, the delays in responses didn't help matters; I do know they are only in on a limited number of days but sometimes several of those days passed between responses. Yes, they probably have a lot of orders and correspondence to get through in those days of which mine is only one, but since I've heard other people mention waits in their processing of online orders I really feel like they should maybe add another day per week for customer service.

I'm leaving the Marionette Theater socks in their packaging, but quality-wise, based on the Roman Mosaic socks, my impression of IW socks is really positive. They are soft and stretchy, and are OTKs even on my tall-ish, chubby-ish legs. The design is really pretty and doesn't distort badly at all. I have to say, even though I baulk at the prices of brand socks both these ones and the ones from my Metamorphose lucky packs are definitely worth the price. Patterned socks I have from taobao or Bodyline are nowhere near as comfortable nor do they look as nice. I tried to get the colours as true to life as possible, because they are lovely. The brown is very rich, and the soft colours of the flowers are really nice as well. The pattern is so pretty and detailed... I'm really happy with these socks. 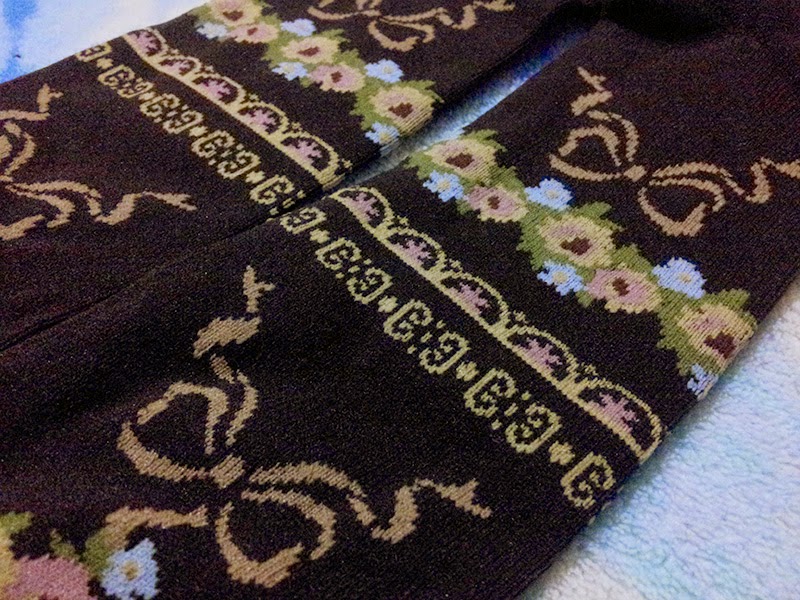 So all in all despite the mistake with my order, and the difficulty of trying to get it rectified, all in all I'm quite happy with what I received. The quality is lovely, and since I'm sure this mistake was a very rare occurrence, I'm looking forward to maybe acquiring more Innocent World pieces in the future.
Posted by Roli at 5:18 pm