I used to own a JSK from Lady Sloth, and rather liked it. So when I saw she was having a blouse sale around when I was thinking that a peach coloured chiffon blouse would make a great addition to my wardrobe, well, it seemed like fate.

On the 26th of August, after consulting with James about style and fabric choices, I facebook messaged to see if I could get the Round Collar Longsleeve Blouse made in a normal peach chiffon. I also mentioned that I was having problems with Storenvy not loading, so Lady Sloth asked me to email her. I did, she sent me the order form and a Paypal invoice, I paid and sent back the form and my order was under way! She is incredibly quick at reply to messages as that whole process only took one full day, though in my last message I did ask what the current turnaround times was and didn't get a reply. But I got an email on the 12th of September saying it had been shipped and sending me my tracking number, just a little over two weeks from me placing my order, which I thought was a pretty good turnaround time. 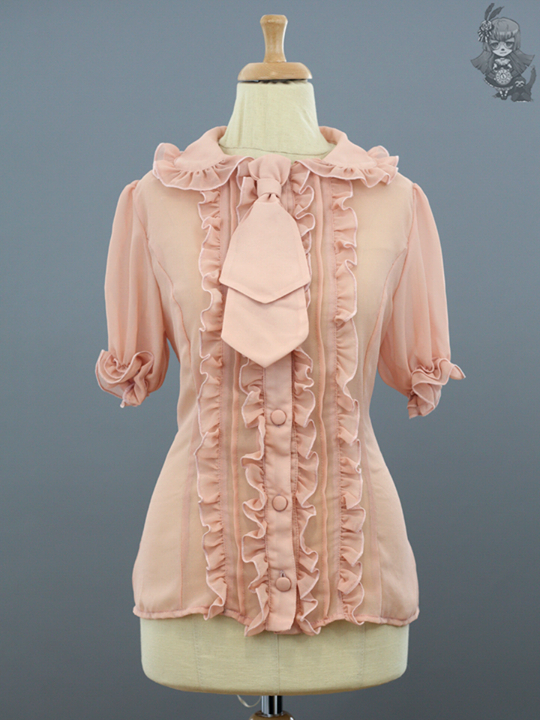 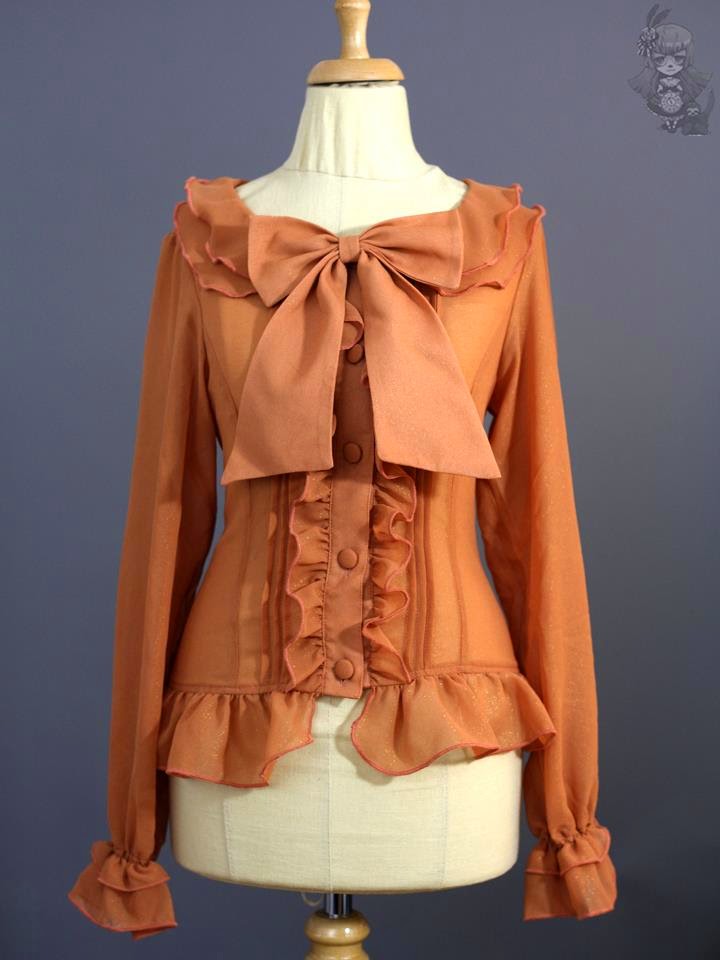 This colour... in this style.

I received my blouse on the 23rd, as week and a half after it had been posted, which was great time-wise.

The first thing that I noticed when I opened the blouse was that it was darker than I thought... and shiny! I didn't realise it was a brocade chiffon with a shine when I ordered, so I was all like... whoa, glitter. But it is fairly subtle, and very nice all the same. However, it's a more salmon-y colour than the picture above indicates, rather than the pastel that shade was described as. 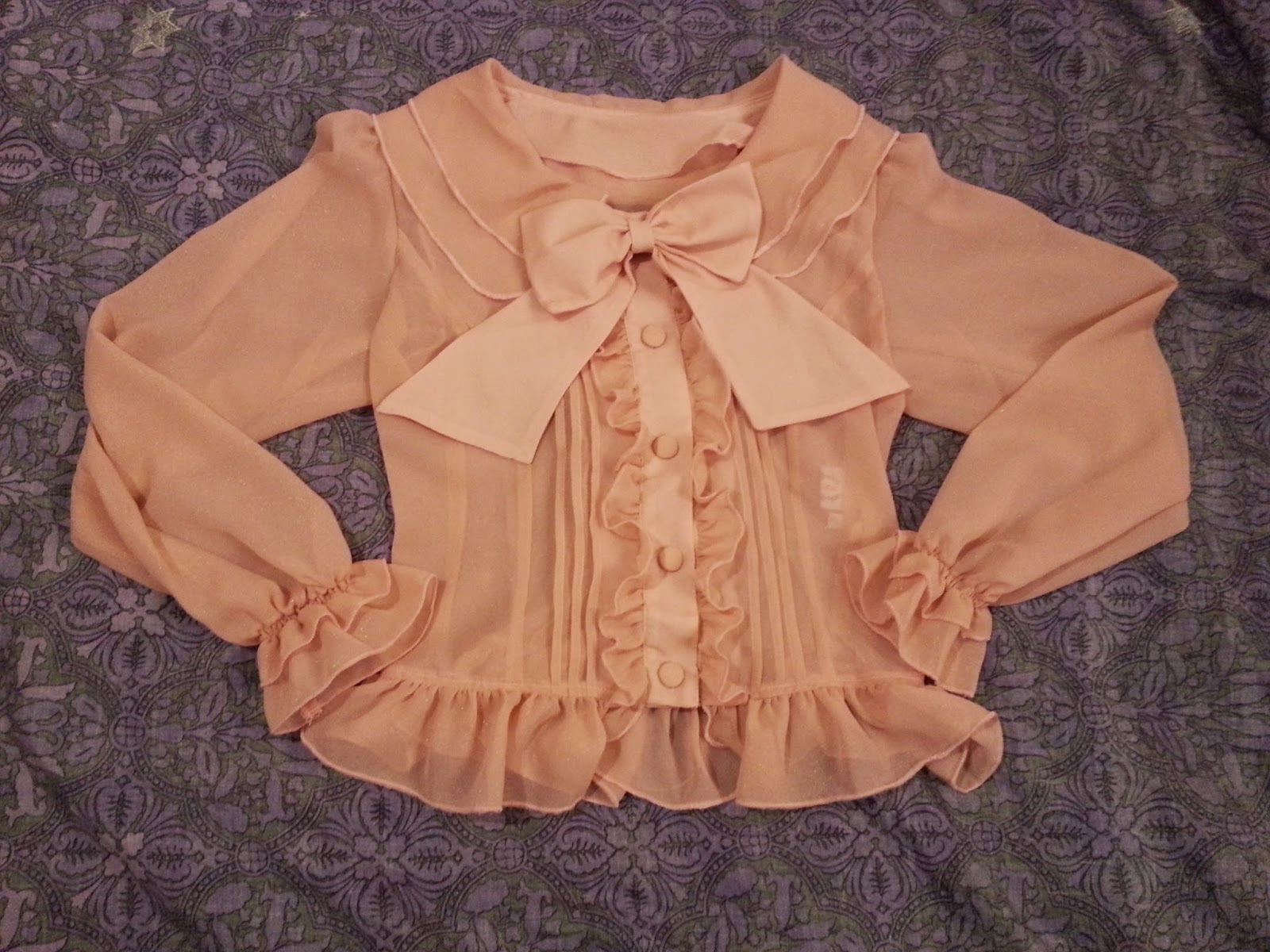 If anyone reading this has those ubiquitous suede bow heels from taobao, the blouse is almost a perfect match for the pink ones. Which is good, because it at least matches a pair of shoes I have since it doesn't actually match the skirt and the dress I bought it to go with! But since I have shoes I can make it work regardless. So I was a bit bummed about the colour, but that is a risk you take ordering online and since I bought this during her blouse sale it still worked out under $65AU including postage, so it's not too bad. 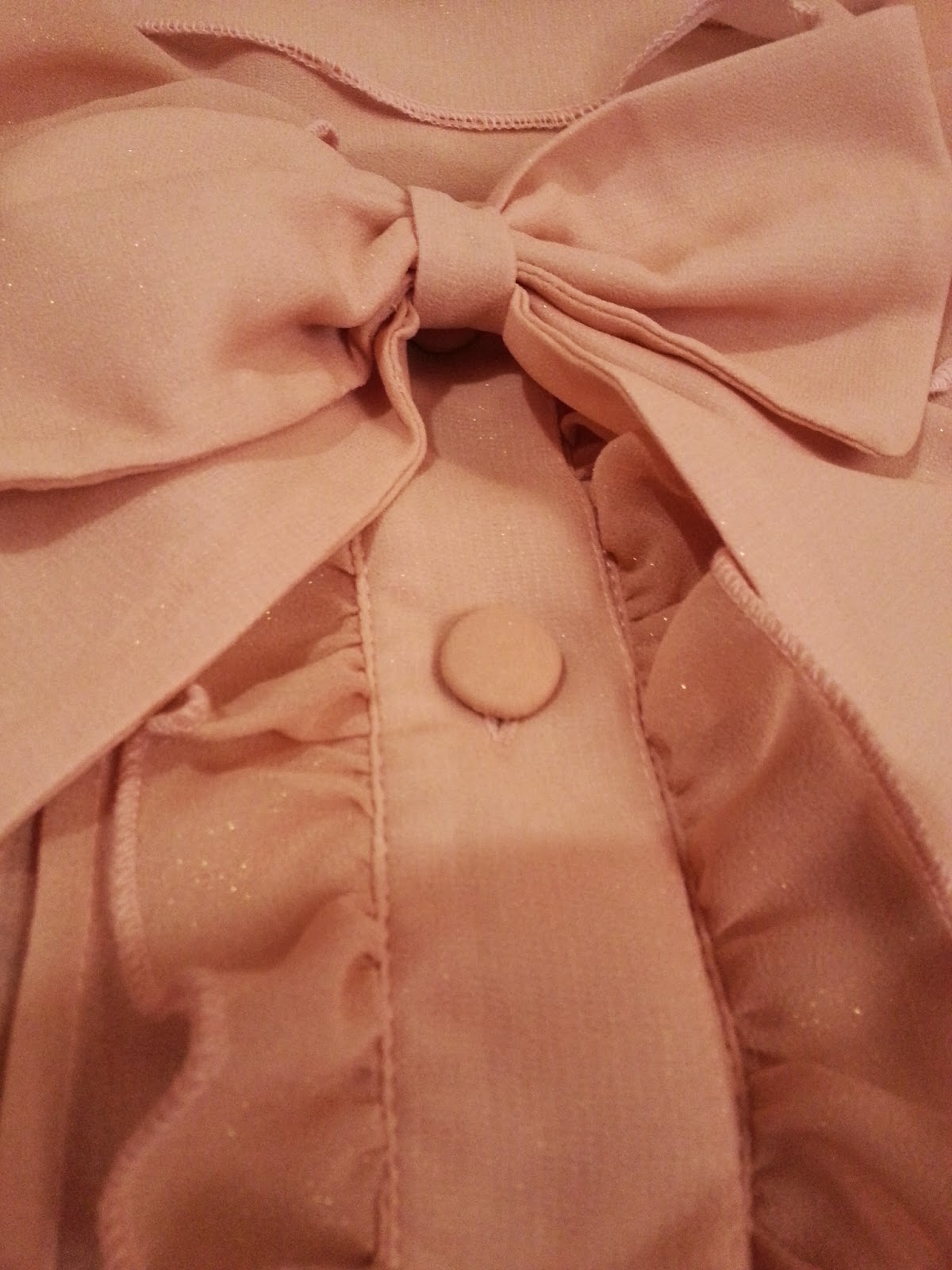 As far as construction goes it's very sturdily made and I'm super impressed by the symmetry of the detachable bow! It's also very accurate to the stock photo design wise. There's only one thing I don't like too much, which you can just see at the top of the photos above, and that is that the rolled hem on the ruffles on the neckline is a bit big and doesn't look too nice close up. Not a problem from a distance though, so it's okay. Also, the corset lacing ribbon is a paler peach colour than the blouse itself, but that can be easily changed. It also had an unpleasant factory/fabric smell out of the bag, but I steamed that out.

Size-wise I ordered her standard large size, and it fits me well, skin-tight in fact. Her site says it can go 10cm either way of the listed measurements, which I don't think it can, but I'd definitely say it has around 5cm of give either way.

Overall, I'm pretty happy with the blouse but due to the colour difference and a few little details I'm not sure if I'd order another Lady Sloth blouse, unless there was another sale. I was happier with my blouse from The Floral Notebook. However, given that I haven't worn this one out yet that opinion may change with wear, so I'll update if I do change my mind. So in summary, it is a well made blouse at a reasonable price, but I'm not sure how highly I recommend it.
Posted by Roli at 11:09 am