In my teenage years I was never much of a gamer - I just loved Age of Mythology and was addicted to FarmVille. No, I was a late bloomer and I'm still pretty limited in the games that I play. I tend to get obsessive over a very few games, and one of them is Minecraft.

I never really played with Lego as a child, but to me Minecraft is kind of like the adult version of playing with Lego. You can make stuff. You can make anything you want with what you have. It's getting those things that's difficult You will trek from biome to biome searching for the right type of wood, mine into lava and zombie filled caverns to get diamonds, and traverse the jungles to find enough mossy cobblestones in temples to build a castle on a cliff. 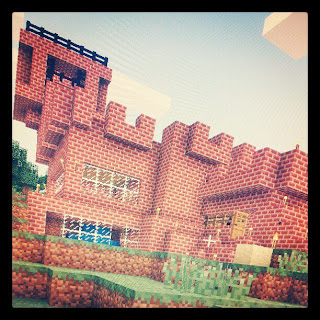 One of James and my earliest Minecraft homes.

I'm not even quite sure what this post is. It's not a review, because it's pretty much impossible to review a game that has deliberately simplistic graphics and no real story line. It's a fun or as boring as you make it. New features are being added regularly - in the time I've played things like trading with villagers, temples and chests in minecarts in mine shafts have been introduced. And though every new feature of note has it's fans and it's haters [and a healthy dose of people who don't care too much either way] the game is undeniably continually developing. So this is not a review. 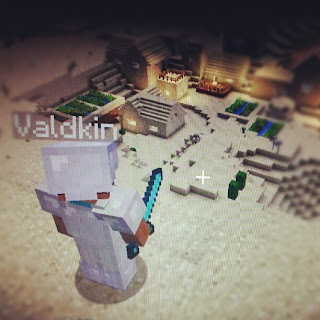 Looking down at a desert village during a night of exploring.

Nor is it a player guide, though it's a game that doesn't come with instructions. You spawn in a blocky world - maybe it's snowing, maybe you're among towering trees, maybe a desert surrounds you - and there is no map and no objectives. The Minecraft Wiki is a friend and ally here, so I don't need to mention that really, the first thing you should do it punch a tree then punch whatever animal is closest. 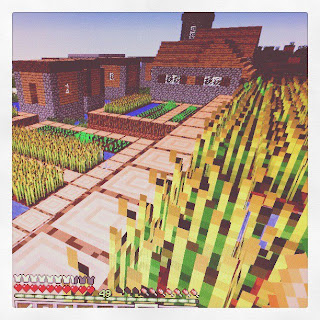 Another village, full of ripe crops. Crops make me happy.

No, I think in the end this is just me adding my voice to hundreds of others saying that Minecraft is awesome. It's not everyone's cup of tea, and I've wanted to rage quit many times when a creeper blows up my stuff [again]. I've taken month long breaks before returning to the Minecraft fold. But my rage subsides and I do return, because it makes my nerdy heart happy to destroy and create in this eight-bit world.
Posted by Roli at 12:56 pm