My wonderful man recently bought me an absolute haul of lolita from Bodyline! Such a haul, in fact, that I have split my reviews into various sub-sections to avoid gigantic uber posts of doom. This is the section for blouses ^__^

This blouse is really gothic or period depending on how you wear it. Which is awesome because it means I'll get a lot of photoshoot and costume use out of it as well as some lolita wear. The jabot and cameo are fortunately detachable, which to me increases the wearability of this blouse. It's decently fitted and sturdily made except for one tiny problem...on putting it on two buttons instantly came off! And when I tugged the rest to see how swell they were sewn on another two came off. Which is annoying. I'm going to make it into an opportunity to replace the buttons with something a bit fancier, maybe pretty silver buttons, but it's still not cool. 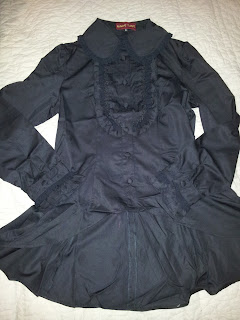 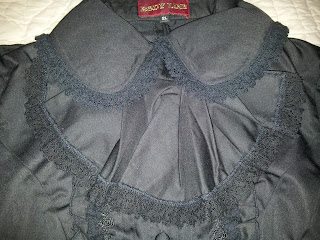 This blouse is cute and comfy! I've tried it on today over skirts and under JSKs and it goes well with either. Since I'm taller than the model the blouse sits a fair bit shorter on my torso, but it's still long enough to cover the waist band of any skirts I wear. It's obviously made of some kind of synthetic and for lack of a better word feels a bit crackly but that will hopefully come out with washing. I may eventually remove the little bows as well, but for now they're cute enough. 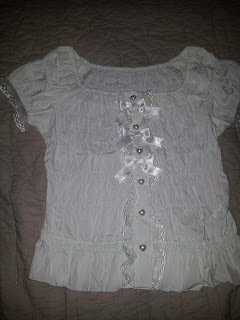 This blouse is interesting. When I first saw it online I thought it was weird, but then I came to like it. Same in real life. It's definitely comfortable, well made and would be able to fit a range of body types. It's perfect to wear over skirts because of the shape but less perfect under JSKs because of the almost off-the-shoulder design. However I love having a blouse that is collarless. I know the collars are a big thing in lolita and I think they are adorable, but I like having a bit of both. And to further increase versatility the bow with the cameo is detachable...but after I removed it I couldn't tell which side was the front! As far as I can tell there is no set front or back. Like the previous blouse, this is made out of something that sounds crackly and feels a bit plasticy but as long as it comes out in the wash that's not a problem. 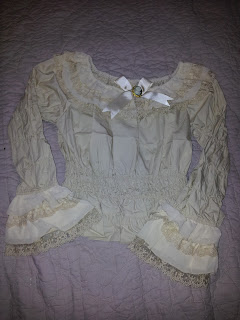 Yes, yes. Black fabric and white lace is an ita staple and the bunny ears make it "worse". But it's really cute and is actually a perfect fit on me, except that the sleeves are a bit tight on the arms but that's solvable by undoing the buttons. It has detachable waist ties that will probably stay permanently off. I'm probably going to wear this nearly exclusively under JSKs to tone down the ita-ness and also with non lolita clothes for a bit of anime cuteness. 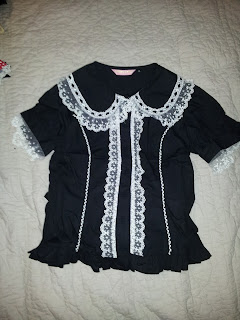 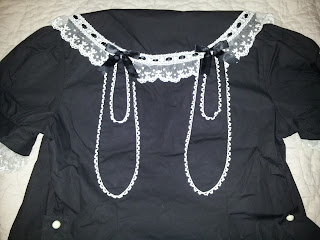 The Neutrals:
The Cons:

Other sections:
Intro Post
Dresses
Shoes and Socks
Jackets
The Others
Posted by Roli at 10:23 pm