It's been a little while now, but I've finally written up posts about James and my first trip to Japan earlier this year! It was an amazing experience, and we cannot wait to go again! So, without any further ado, let's go back in time...

Monday 8 April was an exciting day to wake up on - we were going to Tokyo! I honestly don't remember exactly how we spent the morning and early afternoon; we were already mostly packed except for a few last things and at around 2PM we were on our way!

Unlike our New Zealand trip, this time we decided to drive and pay for parking at the airport. We weren't too pleased with the shuttle service last time and besides, paying for parking worked out to be about the same cost anyway! I drove us to the airport, we entered the parking station, and managed to find a really convenient parking space. We made sure everything was in order with our car and our luggage, I triple checked that I locked the car, and then we crossed over to the international terminal.

Checking in and passing security was easier this time since we knew how to do everything, and in practically no time we were inside the airport proper. What is funny though is that James once again got selected for a full body check! Then once he came through, one of the security staff asked if his blue-and-pink hair was to match his personality, which was actually the first of many compliments James was going to get on our trip…and the first one from a random Australian man, because apparently the average Aussie guy does not like other men non-conforming!

Anyway, since we had decided to come to the airport early to avoid any chance of getting stuck in peak hour traffic, we’d booked ourselves a treat – time at an airport lounge called The House. The lounge was pretty easy to find, the lady at the front desk was delightful (especially because we arrived earlier than our booked time and ended up staying longer than the booked three hours), and when we went down from the entrance to the lounge itself we found the place practically deserted.

We barely had time to sit down and get out bearings before a really friendly waiter with a wonderful accent came over to give us an a la carte menu, tell us when the buffet would open, and take our drink orders. James got a mocha and a juice, I got a tea and a cider!

We relaxed with our drinks for a while and played games on our phones. James redid the lacing on his epic Adidas wing shoes, because those things have tricky lacing and he had figured out a better way to do it after he’d had to take them off for the security check. And of course, we took a selfie ^__^ 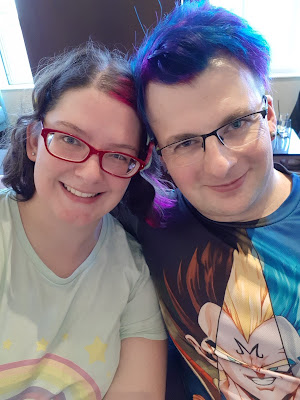 I often tend to get really antsy while waiting, but it was really pleasant to spend time in the quiet lounge. After a little while we moved to a table in the dining area and I ordered us some food from the a la carte menu – asparagus gnocchi for me and pumpkin soup for James.

The lounge got busier as afternoon turned to evening and at around five or six the staff set up the buffet, which I really liked. It wasn’t a huge selection, but it was tasty and varied enough. Then, just as the lounge was starting to feel kind of crowded, it was time for us to head on out to our gate.

As we walked through the public section of the airport I did have to stop and take a photo of the flags above the central food court – I did it for New Zealand and now it’s a tradition!

Then it was up to the gate and shortly after on to the plane. Of course, we took a plane selfie together before we taxied down the runway and took to the sky. 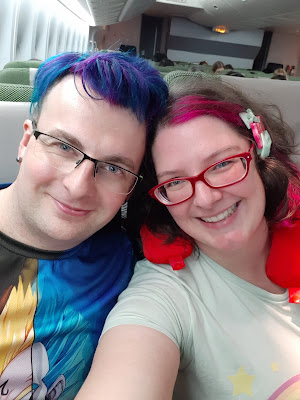 It was a nine and a bit hour flight, and for the first couple of hours we relaxed – James with movies and me with a book since my airline headphones weren’t working properly. And of course, ate plane food.

I also filled out our arrival forms, which were pretty simple. There was one we had to each fill out, and one that I did as "head of the household"! I got way too much amusement over that title for the entire rest of the trip ^__^

Then it was time to sleep, but unfortunately neither of us had much luck with it. I got maybe a couple of restless hours of dozing and James didn’t even manage that. I’ll tell you now – it made for a rough start to the trip!

More reading, more movies, and then the plane started to descend while we gawked at the Tokyo cityscape spreading out beneath us. We landed, took a selfie as we waited for the plane to clear, and then exited into Japan.
Posted by Roli at 7:40 pm