On Wednesday we woke up at 7.45AM, which was far too early for our still really tired selves, especially because it was a cold and rainy day - perfect for lying abed and cuddling. But we had plans for the day so we managed to get ourselves up out of bed and down to the hotel restaurant for breakfast. Now, I’ve said it before but it’s still true – hotel breakfasts are one of my favourite things.


And oh my goodness, let me gush about his particular breakfast for a moment. They offered both a Japanese and a Western selection, and even though I stuck to the Western food mostly it was great to have the option. Especially because they had natto! I’d really wanted to try natto and here was my chance. The result? I did not like it at all! The flavour was okay but I just couldn’t get past the texture. But everything else was tasty – I particularly fell in love with their super thin bacon and little cream puffs. Best way to start the day.

The only bad part of breakfast was that even here we couldn’t find a coffee that James liked! He’s a mocha boy, really, and we’d now been almost two days without him being able to consume a coffee drink that he liked. See, we’d thought ahead enough to bring our own tea bags from home for our room but we didn’t think we should bring coffee stuff! It’s funny the things you think of and the things you don’t when you’re travelling.

Then it was back to our room to get properly dressed for the day because it was our Harajuku day and of course, I was going to wear lolita. I had my outfit ready in my head and was able to get ready (including make-up) in about half an hour. I was impressed with myself! We took some selfies, James filmed a silly video of me, and then we went on our way at about 11AM. 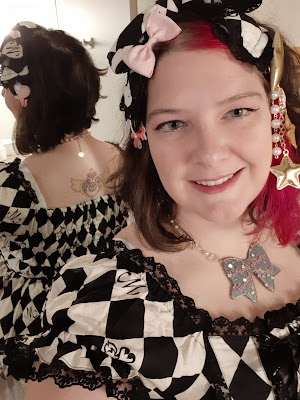 We walked to Shinjuku Station, trying not to get too wet in the drizzle, and found the right platform. Harajuku was just two stops away so in practically no time we were standing on the platform at Harajuku station!

I started leading us toward the Takeshita Dori exit when across the train line I actually caught sight of it! The foreign-yet-familiar sign at the entrance to Takeshita Dori! Of course, I had to take a photo.

It was a matter of only a couple of minutes to exit the station and then there we were! Of course, it was still raining, so our first port of call was turning right into a covered alley lined with various shops. I’ll admit, I was a little overwhelmed by all the stuff, but pretty quickly managed to buy myself a long sleeved rainbow striped t-shirt. And honestly, that’s probably the best purchase I made all trip! There were a lot of cool shirts and accessories and stuff, but I didn’t want to go too nuts right off the bat especially since some stuff also didn’t seem to be particularly good quality, 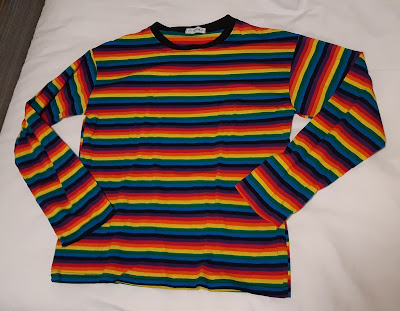 I've been practically living in this shirt all winter.

Further down the little lane we popped into another store where I found a Hello Kitty coin purse, which was exactly what I wanted! We’d actually planned to visit the Hello Kitty store at Haneda Airport after we flew in, but I kind of forgot it wouldn’t have been open that early. But I still got my coin purse and only one day later than intended! We promptly put it to good use too, we had so many coins already! 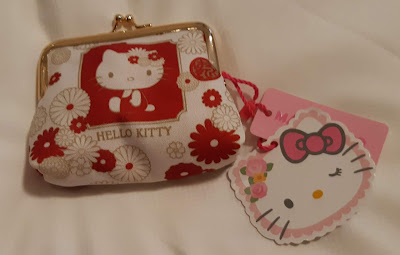 I resisted the urge to buy fake baguettes, and we headed back out to the main street.

But I will say, I now kind of regret not owning a fake baguette.

We quickly ducked into a shop that sold clear umbrellas and bought one before we continued down the street. We visited shops here and there but honestly I don’t remember what we looked at or in what order. We loved ACDC Rag! That’s one thing I can say for sure, and we bought a lot of stuff there! I also really enjoyed getting accessories in Paris Kids and Claire’s. So many more shops we just browsed and didn’t buy. There was so much to see!

We did, however, end up in the W <3 C vintage store, which was super gorgeous, and James snapped lots of pictures for me in their photo corner.

See, we had intended to do a proper photoshoot of me while we were out and about (hence me actually bothering with makeup) but the weather, combined with the fact that we were still quite tired, meant that in the end we didn’t. Poor James carried his camera all day for nothing! So I’m extra happy with these phone pics ^__^

We kept on going from shop to shop, sometimes buying things and sometimes just browsing, until we came to the Harajuku ALTA  building. We decided to go in, browse their shops, find a toilet, and maybe grab a drink. And that is exactly what we did.

We went back onto Takeshita Dori and it was Closet Child time! And oh my goodness, did I go nuts. James stayed outside while I started, because we had a lot of bags, but I called him in when I'd made most of my decisions. And a good thing too, because he found the green coat and Queen Cat ^__^ 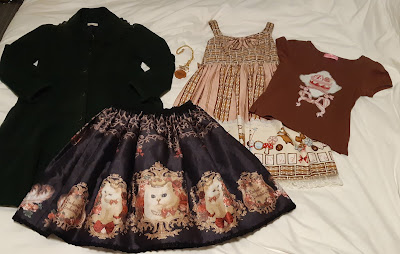 After we were done on the lolita floor we went upstairs to the punk and gothic floor. There were some truly epic clothes there, if I would have fit more and thought I'd get more wear out of them. As it was, James found an awesome belt, I got a cute and cheap bolero, and we bought a shirt as a gift for a friend (which she now wears regularly - James is great at picking clothes people will like!). 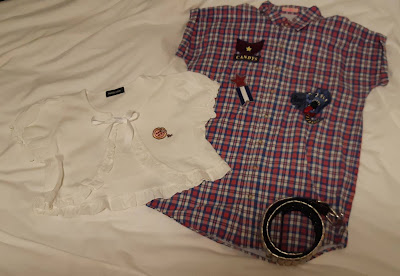 Now burdened with even more shopping bags, and feeling ever more tired, we went back to street level and followed a sign James had seen while on the Closet Child balcony. It said "Jungle Cafe" and had a cute anime girl, so we thought we'd go get some lunch.

Once we were inside and were handed a menu I quickly realised we were in a character cafe for something I had never heard of. We decided to just get some drinks instead, and sat down to enjoy all the cuteness. It turns out the cafe was for Kemono Friends, and we quickly fell in love with the Penguin characters

Our drinks were tasty and it was good to sit down again for a while. As we sat we decided that, even though we hadn't even made it through all of Takeshita Dori, we needed to go back to the hotel. So we spent our time enjoying our drinks and just resting, then bought a couple of clear files for a sturdier memento than the paper place mats, and headed back to street level.

The train trip back to Shinjuku and the walk to our hotel was uneventful. We did, however, take a silly photo of James and all our shopping once we got back.

After that, it was time for both of us to strip off for a bit and relax in our hotel robes. James was super sweet - he rubbed down my arms and legs with a hotel towel because I was cold. He is a very sweet man ^__^

We spent a while just relaxing and, full disclosure, taking photos of how great my boobs looked in the robe. We played games on our phones, cuddled, and enjoyed our rest. Also, I don't remember exactly what happened, but I have in my notes from this day a great quote from James - "I stabbed my forehead with my fucking glasses!" - so what can I say, we had an eventful rest period.

I also took photos of our purchases - I shared some of them above at the appropriate times, but here are the rest. 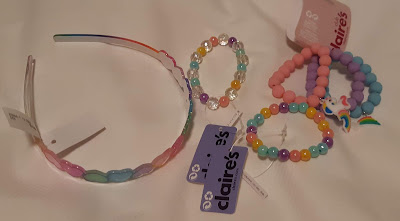 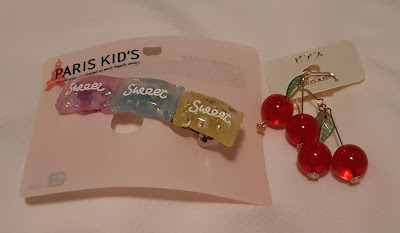 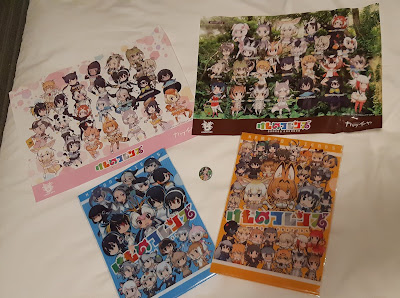 Kemono Friends - the things at the top are our place mats, and the little thing in the middle is a badge 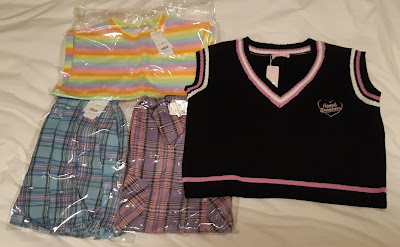 My haul from Wego - the pink/purple plaid shirt is another great purchase that I've worn so much since Japan! 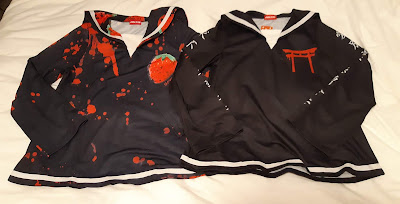 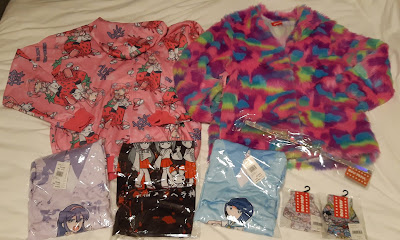 The rest of our ACDC Rag haul

After a solid three hours of rest, we started getting ready to head out again. I wore some of my new purchases straight away, and took a super trashy selfie showing them off. 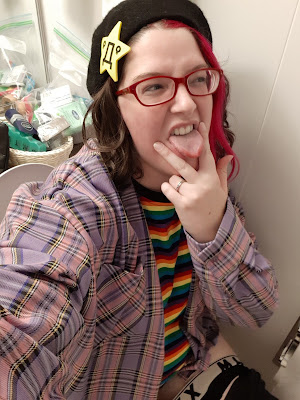 Then we headed out into the dark and the rain. Our goal this time was Marui Men’s in the hopes of finding some cool clothes for James. And speaking of the man, he looked so cool walking around with his colourful hair and shirt under the clear umbrella that I made him pose for some photos on the way ^__^

Once we got there we found were a lot of lovely things, but everything was pricier than he was willing to buy. He did try on an absolutely amazing pair of jeans though, which I loved on him, but I hadn’t told him I’d seen the price tag and was okay with it, so the poor man was hearing my compliments and thinking “she wouldn’t like them if she knew how much they cost”. I felt so bad for making him worry over that! We didn’t end up buying the jeans, which probably was the sensible decision because we are not expensive jeans kind of people but hey, I was in holiday shopping mode!

After browsing the whole building quickly we went back to street level to find a nearby CoCo Ichibanya, which I had really been wanting to try. I love Japanese curry, but have typical white person spice tolerance (aka none) so was excited to eat some very mild curry. On our way we passed a shrine, which looked amazing, and also stumbled across the Godzilla head…though that’s because I got us lost. In my defence, Google Maps was putting the entrance to the restaurant on the wrong side of the block!

But then we were able to sit down and order some dinner! Unfortunately I was still pretty overwhelmed by the unfamiliarity of everything and the language barrier (TBH that was a constant throughout the trip) so I didn’t put as many toppings on my curry as I’d have liked too. However, it was still absolutely delicious, and with a spice level of one (on a scale of one to ten) it was perfect for me. James got their low allergen curry, which he enjoyed too, which was great – when he likes food that I like, it means I get to eat it more ^__^

Then it was time to head back to the hotel for the night. We decided to do what was fast becoming a tradition on the way – stop in at Family Mart for ice cream and some more food. Curry was good, but kind of small portions for Westerners who hadn’t eaten a proper lunch! I also decided to get a couple of alcoholic drinks, since I had been riding the anxiety wave all day, and managed to then win an extra four in the lucky dip! And, to spoil the ending, I ended up drinking half a beer and neither of us touched any of the other drinks. At the end of our trip we just left them in the hotel…I hope the cleaner enjoyed them. 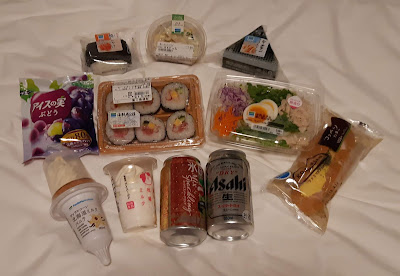 So we chilled and consumed back in our room for a bit before going to sleep. I like sleep ^__^
Posted by Roli at 11:56 am