Here's a confession - I am so out of touch with mainstream fashion that I had to google what's currently in. And that was confusing! So many different (and often contradictory) styles are floating around right now, but in the end I settled on a few key features I seemed to see repeated. There's something of a 90s does 60s vibe happening right now, lots of beige with a pop of colour or alternatively bold monochromes, simple lines with structured blazers.

The problem with that is that nothing there immediately lends itself to a lolita coordinate! So I sat in front of my wardrobe and pondered what I could do. In the end, the main aspect I ran with was that 90s does 60s vibe, though I did try and go a bit beige as well! 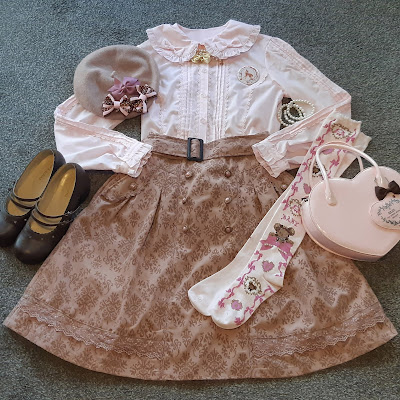 It took a fair bit of thought to get to my basic idea, and from there it was a lot of tweaking to get to something I actually liked! Neither decade has silhouettes or general aesthetics read very lolita, but in the end I developed something I really do like. 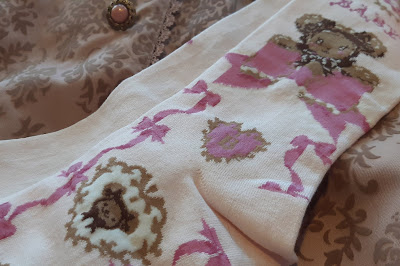 Given that beige neutrals are in, especially with a pop of colour, I wanted to pull out one of my new Axes Femme skirts, with the vague idea of match it with a coloured blouse and legwear. I discovered the these Baby OTKS matched my pink Meta blouse perfectly in colour, and they added a bit more dark brown to match my chosen shoes. 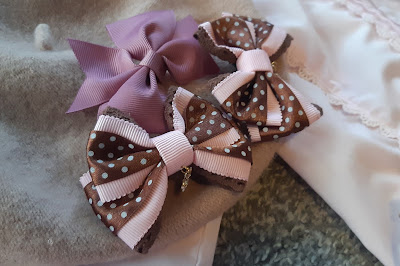 Then, of course, I had to pull all those colours into my headwear. I continued to use chocolate brown in really light touches, but the tan beret perfectly matches the skirt and I was able to bring in both a soft pink and vibrant mauve kind of pink in the bows. 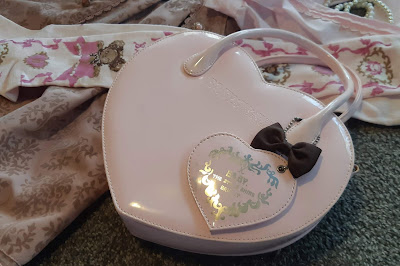 And I added a bow to my bag! Seriously, I don't know how I'd coordinate things without my mass of bow clips - they really help me so much. The heart bag also reads kind of 90s (and a bit 60s) to me as well so it was a good choice for more than just its colour. 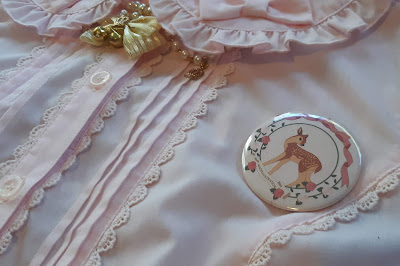 I kept accessories pretty simple, but I liked carrying the bear theme of the socks into a general woodland animal theme with this Madillustration badge. I mean, I like to actually match themes properly when I can but I think it's okay in this coord. The only thing I would have liked better is is I had something in a chocolate brown, as I feel the chest is possibly too pink. But regardless, I really like this look.

Ultimately, whether or not this outfit actually looks like the trends I drew inspiration from, I do like that this challenge has once again encouraged me to put together an outfit that is definitely not something I would have naturally pulled together. It’s a good thing!
Posted by Roli at 10:21 am

Email ThisBlogThis!Share to TwitterShare to FacebookShare to Pinterest
Labels: around your wardrobe in 30 coordinates, axes femme, lolita, outfit post