Building a capsule wardrobe from one starting dress

Recently, as I often do, I turned to the capsule wardrobe thread on CGL for inspiration, because I felt like playing around with digital clothes. One post in particular took my interest - someone shared the Bodyline carousel JSK, saying that it was their first piece and that they wanted to know where to build up from there.

And that is just the kind of experiment I like! So here's what I suggested for them ^__^ 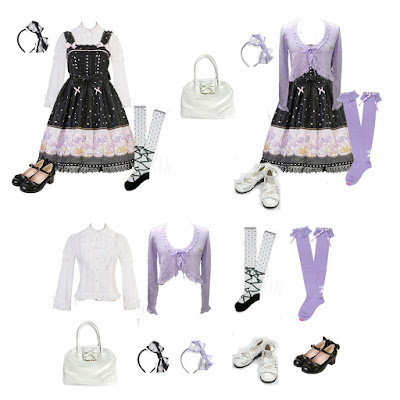 First of all, I put together two very distinct outfits with the JSK - the only piece they share is the bag. They could also have the same shoes, but you know me - one pair of shoes is really just a travesty. The white and black outfit is intended to be more of a neutral look, while the lavender one is pulling from the print in a more interesting way. 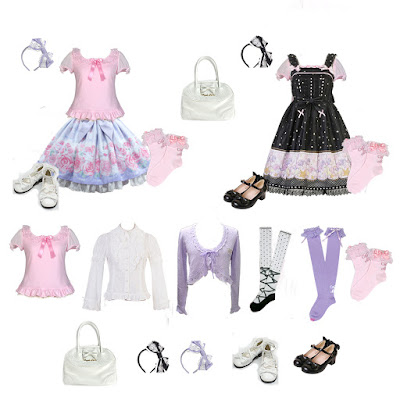 Then I wanted to demonstrate how to use that base to build up from "two outfits" to "an actual wardrobe". The next main piece chosen needs to match at least some of the accompanying items from the first two looks to limit what else needs to be bought, and the things bought to match it should also go with the first main piece.

As you can see, I chose a lavender x pink skirt and got some pink items to match, which in turn work with the carousel JSK. The new skirt could also be worn with the lavender and white pieces, giving the wearer five very distinct outfits already. In reality, given that you could do different makeup and hairstyling, and would probably have smaller accessories and jewellery to further enhance the looks, that gives a pretty workable small wardrobe. 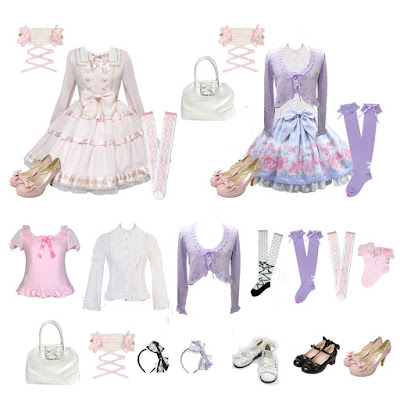 But who would I be if I didn't take it a step further? Let's add an OP and some matching pieces to the wardrobe - running further with pink this time. This then gives the wardrobe more options for the skirt, and some further variations for the original JSK. The new OP could also be worn in a few different ways, bringing the wardrobe up to being able to yield around ten outfits.

As you can see, by this point the black pieces are starting to be the odd ones out. If this were my wardrobe, the next main piece I added would be something with black details. The good thing about this kind of method, however, is that by growing the wardrobe piece by piece if you discover that you want to change directions or no longer like your starting point you're still in a good place overall.

This was a lot of fun to put together, and I hope it gave the person who posted initially some food for thought ^__^
Posted by Roli at 11:22 am