Last year I did something I've thought about doing for several years now - I signed up for the CGL Seagull Secret Santa! I signed up to give (and receive) one gift in the $30-40 USD bracket and had a lot of fun being involved so I wanted to blog about what I got and also what I gave ^__^

First of all I wanted to show what I received. I stated in my form that I was only really interesting in receiving wearable items, and listed off the main colours and themes of my wardrobe, as well as listing some specific items I'd like to receive and linking to some Etsy stores with items I liked.

My Santa identified themselves only as MM, and were from Australia (or at least posted their gift from within this country). They sent me a unicorn card and two Disney themed gifts - a pair of pouches from Typo and an Alice in Wonderland figurine. 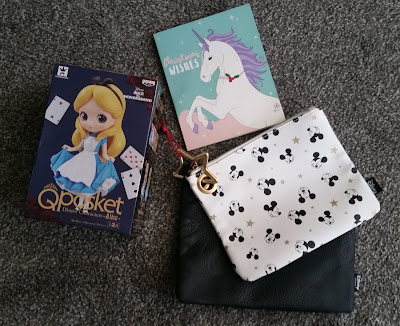 This is my blog, so I'm allowed to be honest - I was quite bummed about my gift. When we submitted information for our matches there was a field for "what don't you want" and I put in one thing - no figurines. I also made sure to list some basic things I would have liked to get - floral hair clips and pastel bead bracelets, for example - and I know several mainstream Aussie shops where you can easily grab those kinds of things.

But oh well, it's how these things work. It was still fun to be involved and the pouches may be useful for makeup or something, and the figure is cute. 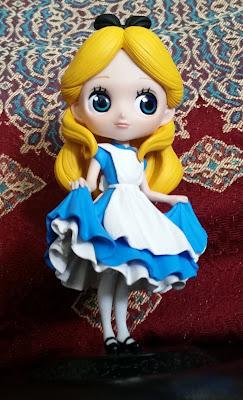 Even though I was a bit disappointed with my gift, I still had a lot of fun shopping for my match and I really hope she was happy with everything. I tried to get her a mix of things so even if I missed the mark with some I'd get it right with the rest!

My match said she was into lolita fashion (sweet and classic, looking at gothic and military too), larme kei, idols (real, games, and anime), Digimon, and Korean make-up. In the end I focused only on the two fashion subsets of her interests. Since I'm no good at telling bootleg from real merchandise, and the stuff that seemed to be real was expensive (up to half the budget for one little keychain!), the idol and Digimon stuff was not something I wanted to pursue, and likewise I know nothing at all about Korean makeup! So fashion it was.

In the end, my gift included a few items I'd bought for myself at various points but that had since migrated to my sales pile, as well as some items I bought specifically for her. I'll admit, I felt a bit bad including some items that I already but I squished that feeling because hey, they were good items for her! Ultimately I went a bit over budget as well so I feel like I did a good job and according to her post on the SS thread I did well, so yay! 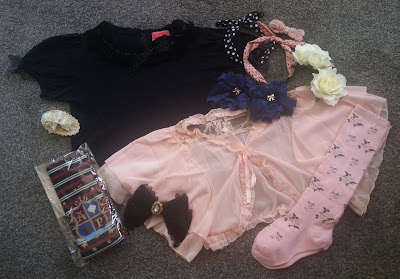 Sorry for the photo quality!

Her gift consisted of two big items - a BTSSB cutsew for lolita (and maybe larme) and a chiffon bolero for larme. Then I included some AP OTKS and Bodyline UTKS; some wristcuffs, a velvet bow, and a little dusty pink barette from Taobao; a couple of usamimi style headbands and a pair of flower clips from eBay (say what you like, I love getting little accessories from eBay); and a Liz Lisa hair accessory.

All in all I really enjoyed participating in this gift exchange and I think I will take part in the next one! Possibly at a higher gift tier, even...
Posted by Roli at 7:49 pm