I feel like I have reached a lolita milestone - I organised a meet! Just a very casual one, mind you, but still, it's an achievement ^__^ 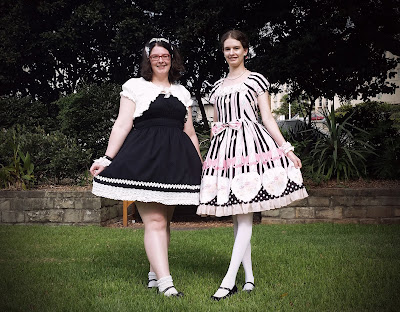 After putting it to vote I set the meet for April 2nd, Easter Monday. Due to difficulty securing a table at a cafe for a public holiday, I ended up making it a super flexible meet - we set a meeting place and from there the plan was to wander Newcastle's main foodie street and settle ourselves in a cafe that took our fancy. Not a very noteworthy meet, but still an opportunity to catch up and frill up.

It ended up just being Rosie and I again, but it was still fun. We got ice cream and "coffee" (tea from me and lemon, lime and bitters for her) from two different places and a few compliments from strangers. One guy even said our dresses were kawaii - I did not expect to ever get that level of correct identification! Because we were, indeed, kawaii. 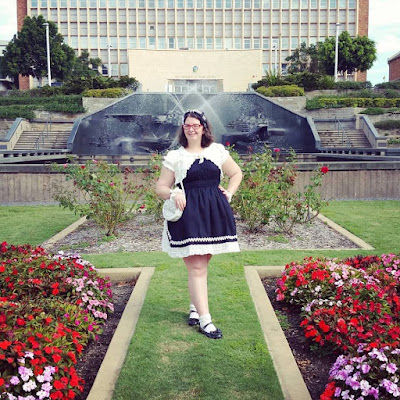 My coord shot, thanks Rosie!

After our the tasty portion of our afternoon we headed into Civic Park for photos. And thanks to Rosie realising that smartphones should have camera timers (newsflash, they do!) and volunteering her handbag as a tripod, we were able to get a photo together without having to rely on the kindness of a stranger. Though I am thinking of getting a small phone tripod no, it would be really handy!

Last of all we checked out the new university building to get out of the heat. Because it was hot, and humid, and icky. Australia just doesn't want to let summer go just yet...

And that was it! A very simple meet, but nice nevertheless. I was lucky in that James drove me there and back, so instead of spending over an hour each way on a train I spent that time in the car with him, which was much nicer. Even if we forgot public holiday traffic existed and getting home took at least half an hour longer than it should have!

I love how lolita my Easter break ended up being, between my bunny photoshoot and this meet up. Did you get up to anything lolita over Easter?
Posted by Roli at 10:10 am