What would my wardrobe look like if I was an everyday lolita?

Or, more to the point, how would I change my existing wardrobe if I was going to try to wear lolita every day? As I’ve said in some previous recent posts, I feel my wardrobe is pretty perfect as-is. Of course, I’ll tweak it forever but currently it is versatile, cohesive and gives me a lot of options. If I were to guess how many fairly unique outfits I could get out of it I’d say I could get 5 looks that aren’t repetitive for each main piece on average, so with 24 main pieces that means I’ve got 120 outfits there. Then of course there’s little variations on each of those so really, with exactly what I have now I could easily (if my workplace allowed it and I actually lost enough weight to fit every single thing again) wear lolita every day for a year and not wear the same thing.

I find my wardrobe sort of spans three main categories as it is:
- Sweet lolita in black x pink and black x red with white in berry and candy themes
- Sweet lolita food themes in brown
- Floral classic primarily focusing on brown, ivory and beige, black, and shades of wine.

I do have a few outliers in colour and style but most of my wardrobe fits into those categories. However, not every piece I own is suitable for the simpler days of life. So, if the stars aligned and I were really to be an everyday lolita I would add the following to my wardrobe:

Five simple OPs
Probably three short sleeved and two long sleeved, these would either be solids, basic patterns (stripes, dots, etc.) or perhaps a couple of prints. These would probably mostly be very distinctly classic, maybe with one being sweet in black. The main key to these pieces is that they would be easy to wear (and launder!) for the time when I’d just want to throw something on and be done with it. Maybe one or two may even be cutsew dresses for bonus easy points. I think five is the minimum number of these that I would want – it means there are options and if I’m having a string of lazy days, or I’m sick, I’d  have enough options to get me through. Because OPs are the least versatile main piece option in lolita I wouldn’t really want to get any more than this though. 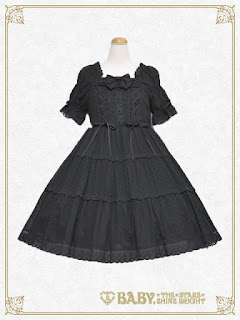 Comfortable shoes
If I were to wear lolita all the time I would need some go-to comfy shoes. On top of what I already have I think these would need to be some adorable pink sneakers (for my beloved black x pink sweet lolita looks), a pair of brown flat oxfords for classic and some flat black boots, possibly a bit Victorian in style. I find that as I am now I tend to just stick to a few favourite pairs of shoes, despite owning many pairs, so I think these would cover all my bases quite well.

More cutsews
The textbook definition of casual lolita is a skirt and a cutsew, and I do like me some casual lolita, so I would definitely need to get my paws on more cutsews! Ultimately I’d probably want both a short and a long sleeved one in each white, ivory, and black, as well as a few other options – probably a brown one, something with a cute print for sweet looks, maybe a couple of unusual but still comfortable ones – on top of the ones I already own. I would have a lot of cutsews but hey, I wouldn’t be expanding my blouse collection much I don’t think because it’s pretty well rounded as is! These cutsew additions would be more to give me easy and comfortable options that I don’t currently have, but also don’t currently need. 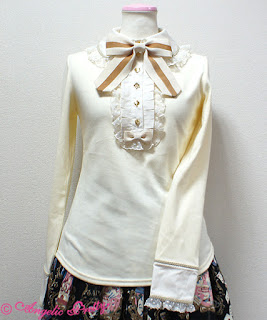 I really have a thing for cutsews. The comfort of a t-shirt with the adorableness of lolita!

More full shirred skirts
Definitely a basic black one! I’m actually thinking of making or buying one anyway, because with trying to wear lolita more often I’m realising how much I like doing casual and I could do casual a lot more easily if I had a plain black skirt. But probably just a few more ones in simple prints – a brown tartan perhaps, a nice granny floral or two, something stripy, and maybe a border print or two just for variety. Not too many, because I still tend to prefer dresses to skirts, but some. 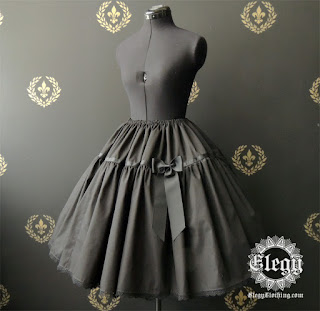 A gorgeous (but comfy!) skirt from indie brand Elegy Clothing.

Things for warmth and weather
Given that I don’t really wear lolita all that often I don’t have much in the way of cold weather gear. I have a black coat, a cream and a brown and cream fur trimmed hoodie jacket, a black and beige trim military jacket, and that’s all the really warm stuff I have that’s lolita appropriate. And my boleros (and Innocent World cape!) aren’t really warm – I’d say they are more autumn appropriate but not really up for winter. So I would need to stock up on another coat in brown for classic, as well as some warmer boleros and definitely some cardigans for casual cosiness. I would also need to get a waterproof parasol (or three, probably three) because no-one wants to be a wet lolita. Then I’d also need some things to layer underneath, like some fleecy bloomers, as well. This whole practicality section would probably be the biggest addition to my wardrobe, except perhaps the cutsews.

Lots of underthings
I’d need to up my petticoat collection to at least five (though probably more!), and make sure they are ones that fit me comfortably – if it’s going to be worn all day, every day, it had better have a comfortable waistband! Similarly, I’d want to up the bloomer collection to at least seven pairs, and as mentioned above perhaps some colder-weather specific ones as well. Lumping it under the underthings category I would also buy loads more basic legwear options – more ankle socks, plain OTKS, and coloured tights. 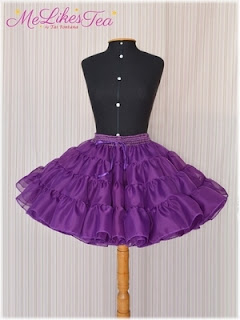 Though I don't think I'd get a petti quite as big as this MeLikesTea one...

Bigass bags
A big, practical (but still cute!) bag would be a must have. I’d want to get three in the end; white, black (though my new one is probably big enough to satisfy this) and brown. Quirky bags are great, but basics are necessary.

Some oddballs
Wearing lolita every day would get a bit repetitive, especially since I do have such a fairly distinct colour palette going on, so I would probably also want to get a few more unusual pieces just for when I feel like changing it up dramatically. I mean, as it is I would actually love to get a fresh spring green main piece and a lavender one (preferably both floral, because that’s just who I am) with a few accessory options to match. But much as I like what my wardrobe is and wouldn’t really change it, I feel that variety is important and I know I’d want to have a few more things that felt different. 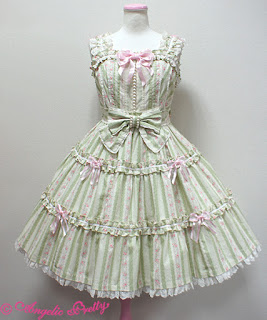 A new release from Angelic Pretty that I adore...

I’d still go to the gym and do active things occasionally, what’s a lolita to do then? There’s not really any such thing as lolita active wear but I think a short, loose dress with leggings or a cute t-shirt with bloomers would be some adorable options there. Or just conventional active wear in cute colours – I’d probably go pink and purple. Cute loungwear is easy enough to come by, so I could lounge around the home in lolita inspired glory…or maybe I’d just buy more kigurumis! Lastly, I would need at least one "fuck it" outfit – something cheap and comfortable that could get ruined and I wouldn’t care. Probably a Bodyline OP, or a handmade skirt and offbrand blouse, something like that. And I think, with that, I’ve covered all my bases!

In finishing I do want to be clear that this is all just a hypothetical.  I will confess, my dream lifestyle is where I am a successful author and I wear lolita every work day for that while I write away in a pretty home office with lots of sunshine, tea, and cats. But even if that lifestyle comes to pass, I’d never get rid of my normal wardrobe. Firstly, I like variety (and pants!) and second I wouldn’t want to force myself into lolita, which is exactly what trying to wear it literally every day would be for me. However, it’s still fun to think about it and hey, if in a little while my dream lifestyle comes to fruition I would love to wear lolita as I work and when I do, I’ll definitely be implementing some of the things from this post.

What do you think of wearing lolita every day?
Posted by Roli at 3:58 pm

Email ThisBlogThis!Share to TwitterShare to FacebookShare to Pinterest
Labels: lolita