Last week I got in another haul of cheap Yahoo Japan auction finds from Buyee. I’ll admit, most of this is a bit frivolous and most things were not on my goal list for this year, but hey, what is disposable income for if not disposing, am I right? To be honest though I am going to try and hold off on buy much more lolita for a while…though I’ve already pre-ordered something and if Metamorphose does mid-year special sets I may just have to get one.

Anyhow, enough talking about what I’m not going to buy, let’s take a look at what I did! Mostly I got a lot of black things…it was unintentional but kind of cool! 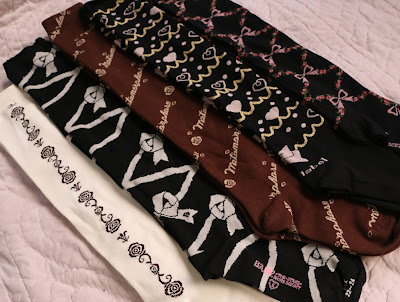 It started with socks - is anyone surprised? I saw this lot and given that I felt three out of five pairs (the brown, white, and floral ones) would be valuable wardrobe additions I just had to go for it. Even though they’re really the least versatile item and don’t really actually match any prints, I love the floral Innocent World ones the most. There’s just something about this style that I love and I really want/don’t want IW to release this style again – want because, well, I want them, but I really don’t need to drop big bucks on several more pairs of OTKS and that is exactly what would happen if these were rereleased in more colours I liked. Surprisingly, in the end I actually really like the BTSSB ribbon socks and the Crown Label ones as well, but am not a huge fan of the white ones! So some may end up in the for sale pile but I’m not quite sure yet which ones! 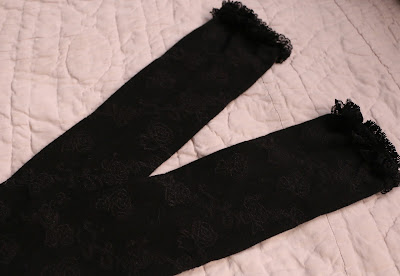 The second item I bought was another pair of OTKS. Don’t judge me! I thought these would be really useful with the subtle floral pattern; they’re simple but not too plain and give me another legwear option for my black floral pieces. And they’re Meta, so they’re comfortable and fit me well, though they're a tad short on me right now. There’s not too much more to say about these but I’m glad I got them. 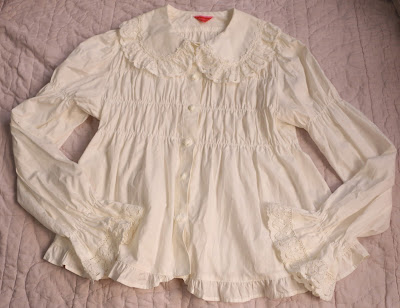 Then I got this oldschool long sleeved Baby, the Stars Shine Bright blouse. I had wanted a new long sleeved white blouse, and though I didn’t really want something so oldschool it was fairly cheap, it’s fully shirred and I thought why not? I do have to say, I really adore the lace on old school pieces and when I think about it more, it is nice to have an oldschool blouse that fits (my other Baby one is an under-JSKs-only kind of fit right now) because it means that I can pull together properly oldschool looks if I want to. It is conformable and adorable and a good fit...except for the length! It's meant to be shirred around the bosom in a babydoll sort of style but for me the shirring ends awkwardly at the top of my boobs - not a good look! However, it will still be lovely under JSKs, which I tend to wear more of anyway, so it's good enough for now and my hunt for the perfect long sleeved white blouse will continue at a more leisurely pace.

But oh my goodness this stank so bad when I pulled it out. I’m exaggerating a little but I’m 99% sure it came from a smoker because it smelled pretty rank. And that’s noteworthy because that’s the first time this has happened to me with a secondhand purchase from Japan. Normally there is no smell, or a lovely smell, but here for once I got a bad one. Oh well, that’s what a laundry is for! 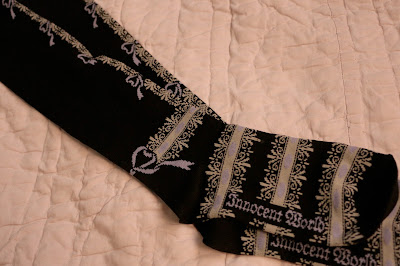 Next up I bought another pair of OTKS, ones that were actually on my 2016 wardrobe goals list – black with a neutral white pattern. To be honest I wasn’t overly excited about them though I did like the lacy pattern, which turned out to be good because when I got them it turned out there is pale blue/lavender in the print which does not go with my wardrobe at all. So these are definitely destined for the sale pile! I feel a bit silly too, because the colours did seem a bit bluish in the listing photos, but I didn’t think much of it because you can never really tell, so in a sense this one’s on me. 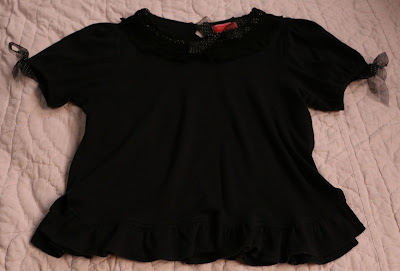 Then there was a cheap BTSSB cutsew in black with adorable polka dot ribbon details. I like how adorable this is and I have to say I am really developing a love of cutsews, as you may have noticed from posts of my purchases over the last year. Once I discovered they can sometimes fit, even at my current size, there has been no turning back! But what makes me sad is that though this fits around it is waaaaay to short for me - it fits like a crop top! And I don't want to hang onto this as an under-JSKs-only thing, because I have other tops that work well under JSKs, so since this can't be versatile it has no place in my wardrobe. Which is such a bummer, but oh well. My loss will be a shorter persons gain! 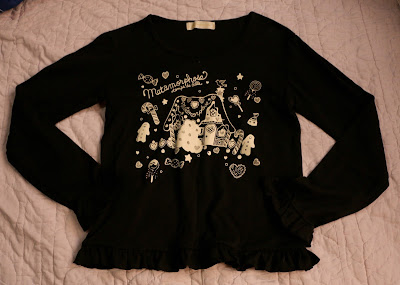 Speaking of cutsews my next item, the long sleeve Metamorphose Candy House cutsew, fits me like charm. I mean, it is a little too tight on the arms but overall it fits and it’s cute and I can wear it without having to lose any weight first! And it will only fit better as I get healthier. I may be developing a cutsew addiction… The only downside of this top is that the print is decidedly ivory. The colourway was black x ivory (or unbleached, I forget) but in photos it appeared a lot more like an offwhite, so I’m not sure how much use I’ll be able to get out of this after all. I’d definitely going to hang onto it for a while though, because I really want to try pairing it with my Patisserie Dream skirt and seeing what other outfits I can come up with using it. 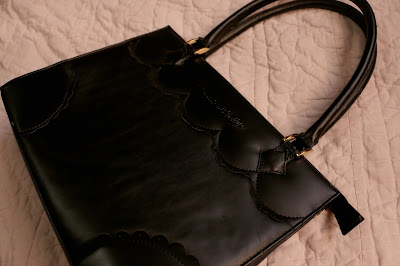 The last item in my haul was this Angelic Pretty bag. It is exactly what I like in a bag (except for when I like frivolous bags) – it’s pretty but neutral and is a good size but not overly large. It is in very good condition as well, which I’m happy about.

So that’s my most recent haul! As I said, lots of black things, but I wear a lot of black. Have you received anything exciting in the mail recently?
Posted by Roli at 12:29 pm