Once again I am answering two Lolita 52 topics in a single post, because I don’t think there’s really enough content there for two separate posts. Before answering I want to clarify that I think there are two real clichés of lolita. The first is the “lifestyle lolita” stereotype of the elegant, dainty maiden. The second is the more modern cliché of the Japanophile who shops and spend her time online or at meets, who embodies the perhaps more realistic but no less inaccurate lolita lifestyle.

For both those clichés, I fit them in very limited ways: 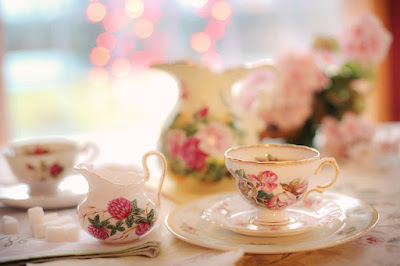 A lovely stock photo of tea. Don't let this fool you tough, I drink my tea out of an Octoberfest stein.

Aaaand that’s it. Not really much of a thing there is it? I'm not even a huge anime fan, though I certainly like some.

Regarding not fitting the cliché, I really want to be pedantic and say that all of me does not fit the cliché, end of story but a few noteworthy (kind of) points are:

Most of my free time is spent in Tamriel lately.

So there you have a bit of me in a nutshell, and how I relate to the lolita cliché. Having said that though, I think basically anyone involved in this glorious subculture of ours could come up with a similar list of “I’m lolita in this way, and not in this way” and in the end, the only bit that really matters is that we wear and admire and enjoy these fabulous clothes.
Posted by Roli at 12:20 pm