Honestly I could answer this post in on sentence: the best places to wear lolita are those where you are comfortable doing so,

However, since I like my blog posts to be longer than a single sentence I’m going to segue into a bit of a rant about the “appropriateness” of certain fashions. Because I would love to live in a world where there is no such thing as alternative fashions because everyone felt comfortable and it was socially appropriate to wear whatever styles they like. I mean, of course safety (no long skirts on building sites!) and reasonable levels of neatness and modesty in situations like work should be adhered to but still. 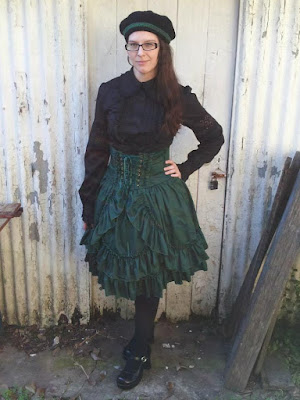 A simple loltia outfit I wore to uni once.
Do clothes have any impact on my ability to learn?

I’ve always been one to wear what I like. I think it stemmed from the fact that in those horribly formative years of teenagerhood I truly didn’t understand how to look like the other girls my age. So I just did me. As I got older “doing me” became less about just wearing what I found comfortable and morphed into exploring alternative fashions. I’ve worn just about anything out and about, from Victorian-esque getups to my favourite rainbow outfits which were literally all rainbow coloured clothes. So now that I’m a proper grown-up with a 9-5 and everything I find myself somewhat saddened by the fact that what is considered appropriate in the work environment is a very limited thing.

So I say wear lolita whenever and wherever you want as long as you’re comfortable and there won’t be any negative consequences. Because the more people who like dressing differently actually do so the closer we get to a world where people can get over the idea that you have to dress a certain way to be acceptable, taken seriously, or judged on your actual abilities.

That was a ramble, I know, and maybe not the most coherent but hey, I just want to live in a world where conformity matters less.
Posted by Roli at 9:45 am