Another day, another wardrobe to play with. This one presented a few challenges. Firstly, the first set of pictures anon gave me were of fairly low quality and they just described some of their offbrand pieces, so I requested better ones to work with. They gave me higher res images of their main pieces, but left out the offbrand things from their first collage. But I wanted to include those things, because what if I ended up just suggesting exactly what they already had? So I went on a hunt, using some of the low res images to reverse image search and searching for similar offbrand pieces to the pieces that were dark/blurry/tiny and also trying to find things that matched their descriptions.

Here are the things I know for certain-sure are in Anon's wardrobe. IWs British Bear is there twice as they have the above colourway in the bottom style, but the colours were so off in the correct photo that I used the top image in my collages. 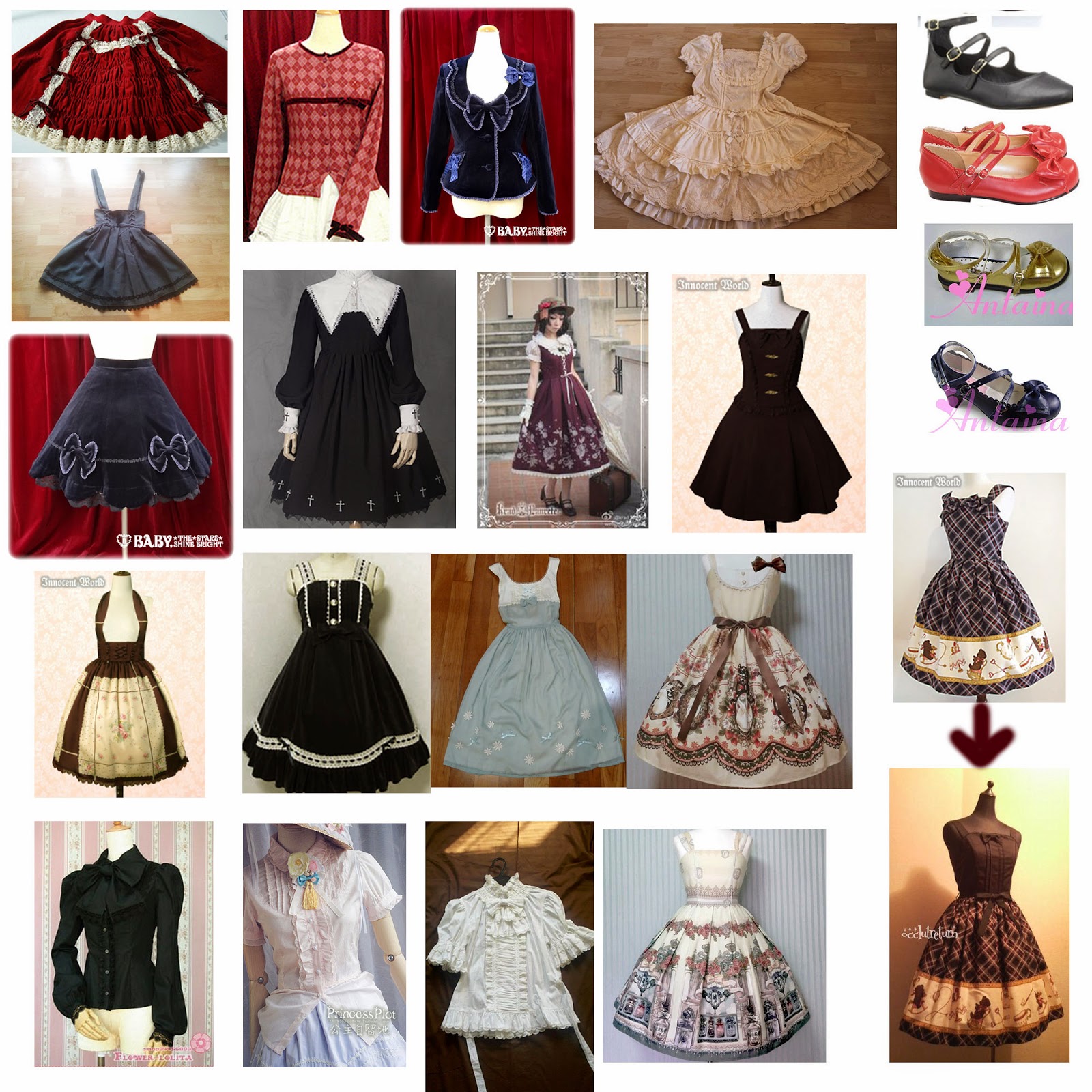 And these are my approximations of the remainder of their wardrobe. To be honest, I don't think I'd do this level of sleuthing again. It was fun, but also very time consuming, and I don't like the fact that even with my best guesses I may still have gotten this all wrong. They also mentioned that they have a red headbow and some berets, but I decided to not include them at all and made sure not to use them in my wardrobe additions. 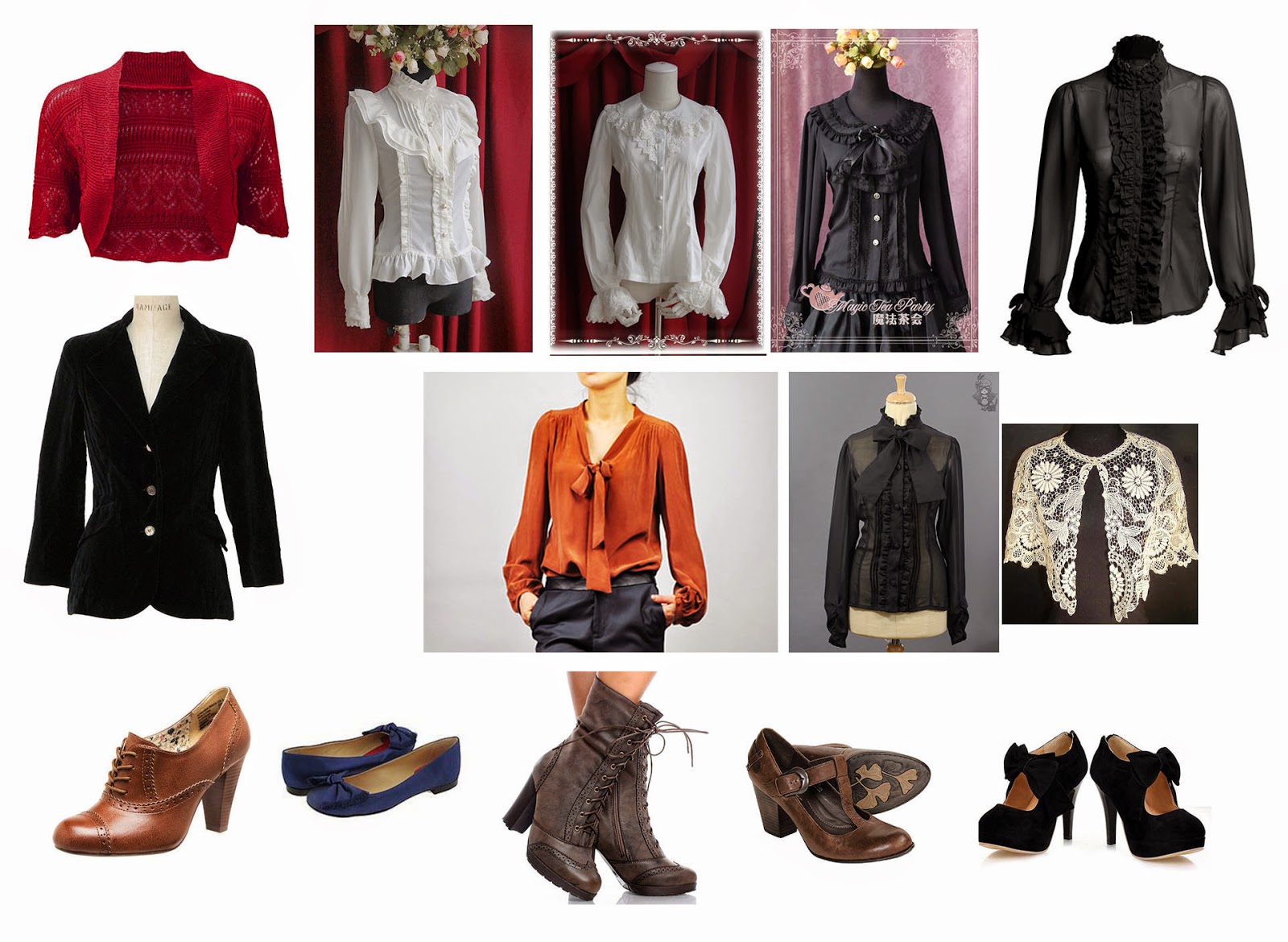 Already you'll be able to see that this Anon did not have the previous Anon's problem of not enough blouses. The problem they did have was not enough main accessories and not enough matching pieces overall. From looking at their pictures it seems like they focused on working in a lot of offbrand pieces, which is a great idea, but can sometimes result in a wardrobe that's not quite there.

Another thing I noticed is that while most of their wardrobe is black, white and warm colours they then have the navy BTSSB set and the pale blue IW dress which really don't match the overall colour palette. Depending on what direction Anon wants to take their wardrobe I would possibly suggest selling those pieces unless the wanted to eventually work more blues into their wardrobe, because as it stands they are the odd pieces in an otherwise fairly cohesive wardrobe. Since they are a minority, I didn't focus too much on finding pieces to match them specifically as I tried to keep my suggested additions as versatile as possible.

Speaking of my additions, here they are... 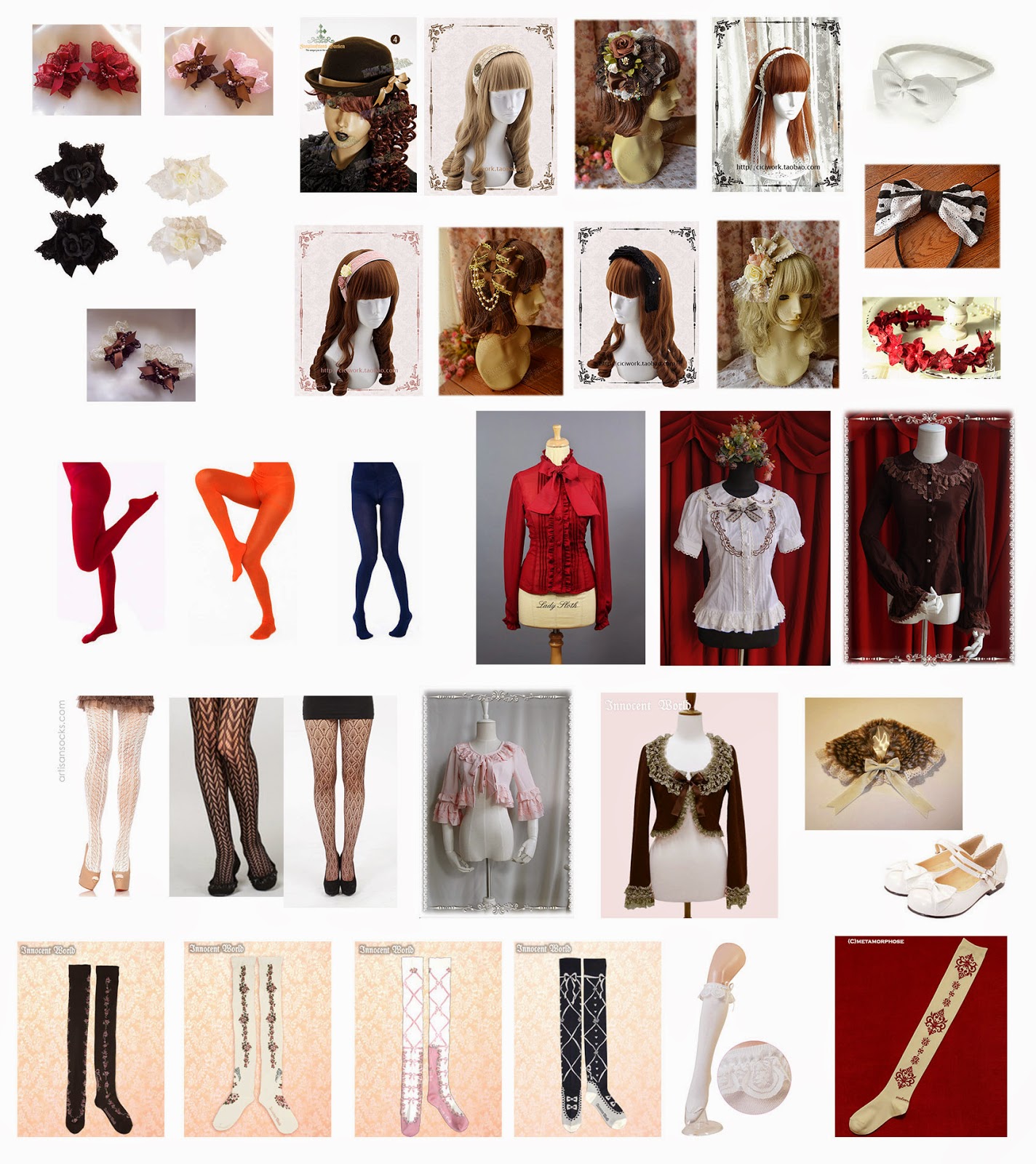 As you can see, I mostly focused on adding a variety of main accessories and only a few main pieces. I would have loved to have added more shoes, but given that Anon already had quite a few pairs that work, though they're not exactly the shoes I'd choose, I couldn't really justify it. Based on the pieces Anon had in their original collection, I didn't get the feeling they were much of an ankle sock person, so I didn't include any of those this time around, and I did feel that solid colour tights would suit their wardrobe. And I know that the fawn fur collar isn't really that versatile of an inclusion, but fur collars in general can add so much to a look I thought it was a good thing to add.

Since this Anon's wardrobe isn't too big, I put together three outfits for each skirt or dress. Onwards!

I love solid colour dresses in lolita because they are so easy to style in different ways, these are just three of many combinations Anon's wardrobe could yield.

This JSK was great to coord because of all the colours in the print. In the third outfit, Anon could customise it further by replacing the bowler hat ribbon with a pink or ivory one.

Again, another fun to coord JSK. The hints of gold in the leftmost outfit should be accentuated with gold jewellery, and I thought the orange on the far right was epic, though I'm not sure how well it would look when worn.

Old-school! I stuck to black and white only for these outfits, but as you can see there's a lot you can do even when only working with two colours.

This is one of the hard-to-match pieces, due to the limited amount of blue in Anon's wardrobe. However, I think I still gave them several different options without resorting to pieces included solely to match it.

Surprisingly, I also found this JSK a little difficult to work with, but I still gave Anon three very different looks.

As I mention at the beginning, this is not he cut of British Bear they have, so imagine it with a plain black bodice.

Another OP which is gorgeous, but limited in scope. I should also mentioned here that Anon has the non-embroidered version of this dress. Smaller accessories, and one's specifically bought to coord this dress, would definitely make these outfits pop.

Short-sleeved OPs are much easier to work with! I think these are actually my favourite outfits that I came up with for Anon and they show again how solid coloured main pieces can provide a blank canvas for a wide range of outfits.

This skirt [and the matching jacket] is again, an odd one out in Anon's wardrobe. Oddly enough, while I found the skirt a bit hard to coord I had a lot of use for the jacket on its own.

In grey-and black, this skirt was also a bit of a mis-match with the rest of Anon's classic and old-school style wardrobe. However, given grey's neutral nature it was easier to work with than the navy. A grey hair accessory would probably help these outfits, preferably a mice fascinator or small hat.

More old-school! I adore skirts like this and coorded it in three outfits I'd love to wear myself... though I'd have huge platform with the middle look, just to really get and old-school vibe.

Lastly we have this skirt. I'm not sure if the suspender portions are detachable, but these outfits work whether they are or not.

With that, this is the third Anon wardrobe completed! It's interesting to see the different styles people have in their lolita wardrobes, and also what pieces they have and what gaps they leave. I hope this has been helpful, and there are still more to come!
Posted by Roli at 3:17 pm