Recently I ordered a Classical Puppets bell-shaped petticoat from the Australia lolita store One Day In Paradise. My first petti is a Leg Avenue one I got off eBay and it has served me quite well but it doesn't provide much shape for skirts of heavier fabrics. It's brilliant with light dresses, and gives just the right amount of poof for me, but I needed something a bit more heavy duty as well. As I had heard many good things about Classical Puppets pettis I decided to give them a go, and fortunately ODIP had a black one in stock in my size.

This is the stock picture from ODIP. I didn't like that they didn't have a picture of the actual black petti I was buying, but that's not really a big deal - it is only a petticoat. 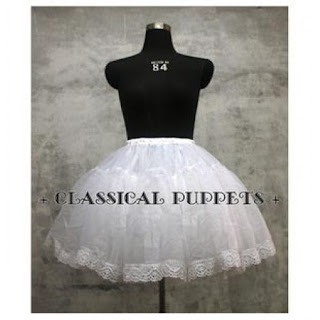 This is the petticoat I received, still crunkly from postage: 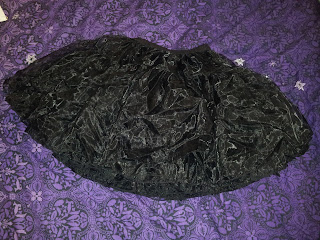 My phone doesn't like photographing it, but I love it! It's gorgeous and soft and so floofy! The only thing that makes me a little sad is that it doesn't have a line of lace at the bottom, but that ODIP's fault for not having an accurate picture. I put it on instantly and started prancing around, feeling like the puffiest princess ever. It was a great feeling. And so now I'm adding my voice to hundreds of others when I say, if you want a cupcake petticoat, Classical Puppets is the way to go!

Ordering from ODIP was easy. I sent a quick email to Marie, the lady who runs it, just to confirm that the petti was in stock and not a pre-order kind of thing, and she sent a helpful reply very quickly. The pricing was also very reasonable at $50. Given that there was no custom sizing waiting times I don't mind that the petticoat itself cost a little more than it would have been to buy directly from Classical Puppets or a reseller like Qutieland.

However, postage was quite an issue. It was almost a full week from placing my order to it actually being shipped, and as it was just a single in-stock item I felt like that was a little too long. From that point it still hadn't arrived two weeks later, so I sent another email to Marie. It turns out my order had been shipped to someone else in Sydney. Marie was very helpful and apologetic, and found out what had happened within a day of my emailing her. I just don't like mistakes like that happening because they are completely avoidable, and they don't just inconvenience me, they inconvenience whoever the package was accidentally sent to, and create lots of work and worry and fuss all around that would never have happened if whoever packed the package had made sure to triple check the order. So my petti was posted again on February 1st, three weeks and one day after I had ordered it, and I received it today, February 4th, almost a month after ordering.

Excited me this morning heard the postman's knock and dashed out to get my newest lolita purchase, finally. But I was honestly a bit jacked off when I opened the postage satchel and the petti tumbled out, because the little plastic wrapper it was in hadn't been fastened shut so the petti had slipped out and was just lying jumbled inside the satchel. Maybe I'm being too black-and-white here, but if someone dicks me around, I want it to be made up to me. An email apology when they're fixing a problem that occurred on their end doesn't cut it. If there had been a handwritten note of apology in the bag, maybe a voucher for a few dollars of store credit or free postage on my next order [and really, who ever actually uses those?] I'd have felt more forgiving, but I think it's stupid of a business to mess a customer around and not do anything to make amends. Because ODIP has lost a customer in me. I won't say no-one should order from them because I'm sure I'm the sucky case in a hundred where something goes wrong, but I wasn't happy with how they dealt with their mistake so unless I have no other choice I won't be a customer again.

So, just to sum it all up for anyone who didn't feel like reading this whole rambly post:
Classical Puppets: Phenomenal! So, so happy with my petticoat ^__^
One Day In Paradise: Easy to order from, but really messed up on postage and though I got my petti eventually I expect a business to make it up to their customers when they make a mistake like that, so I'm not the happiest of campers.
Posted by Roli at 1:02 pm