Ever since I saw my first fawn fur capelet, I was in love. But alas! My practical side is often too strong, so when I've seen collars and capelets on the EGL sales community for $50+ I've always ummed and ahhed and eventually decided against it. Then when I saw the pretty collar on Peacockalorum's Etsy it was the start of a couple of months of internal debate, and I finally succumbed.

I ordered the collar with ivory ribbon and cream lace, like shown in one of the listing pictures. 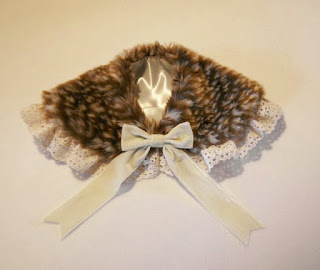 And this is my collar, straight out of the postage satchel, wrapped securely in it's little bag. 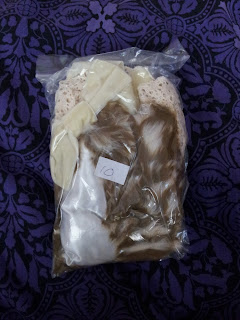 And this is me trying to mimic the listing picture - seriously, this collar had probably the most accurate stock photo I've ever seen. Pictures speak louder than words, we're told, and seriously, look at this. 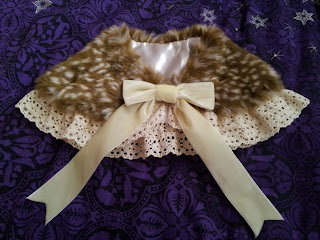 A couple of close ups of the lace and the hook-and-eye closure. 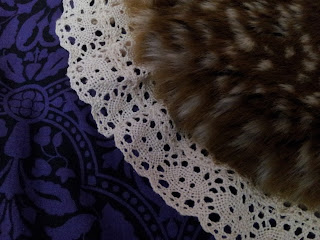 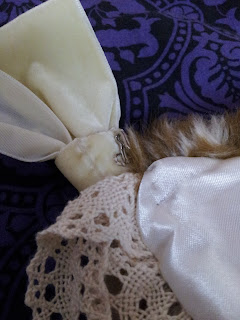 As far as ordering goes, Etsy made that easy as the proverbial pie. I placed my order January 31st and it was posted February 12th, which I think is a decent turnaround time for a made-to-order item. I received the collar this afternoon, February 20th, which was quicker than the 10 days I was told it would probably take, so I'm happy.

After I placed my order on Etsy I had a bit of a hunt around the interwebz to see who else had acquired one of these collars, and I found out that Peacockalorum is one and the same as the lolita store Stocking Shock. The collar is a couple of pounds cheaper if bought directly from Stocking Shock, which is fair enough when you take into account Etsy fees and such, so though I did facepalm a bit about finding the direct shop after buying from Etsy it's not really a big deal.

All in all I'd really say if you want fawn fur, get this! I've attempted working in faux fur to make a  collar like this, and it's kind of a bitch. So to get something nicely made and in a good quality fur for under forty dollars [and that included postage from the UK to Australia!] is really phenomenal. All the sewing is very neat with only a couple of hardly noticeable stitches visible. It fits me perfectly and snugly, and I love it.

And lastly, I just wanted to share this picture of Syra, because it's cute. 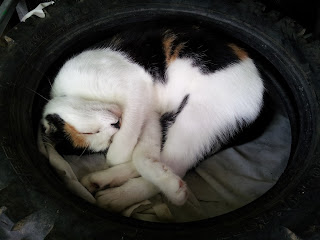 She must have been tyre'd. Please don't kill me.
Posted by Roli at 4:23 pm