The shame of asking.

I just finished watching Amanda Palmer's TED talk, and if you haven't watched it I really suggest you do. Here's a nice handy link to it. 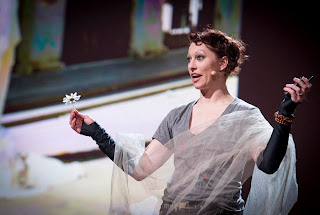 Not sure who to credit for this photo, if anyone knows please tell me!

Watched it? Finished taking a few minutes to process it? Grabbed a nice hot beverage to get yourself through my not-entirely-coherent rambling?

There was one thing that really stood out to me in this talk. If you strip away all the background about music and how trust and asking is important for musicians and artists you are left with a really stark and simple message; frequently, we are ashamed to ask for help. And that sucks.

I know there's a thousand reasons why we don't ask, and sometimes it's hard to overcome whatever barriers we all have set up inside that stop us from asking. I'm in a very loving, honest and trusting relationship and I still sometimes have to remind myself that it's okay to ask for things. "Could you hang out the laundry?" shouldn't be a hard thing for me to ask my James, but sometimes it is and if it's hard for me in that intimate relationship I have to wonder how hard it must be for so many people in other situations.

But that got me to thinking to a step further and I feel that to some extent we may be hesitant to ask because in Western societies as a whole, we feel an obligation to answer an ask to the affirmative. "Yes." Think for a second to when the last time is you said no when someone asked for something, and how it made you feel. I don't think I'm the odd one out when I feel guilty, like I've let someone down, when I say "no" instead of "yes". James will say "Any chance of a cup of tea" and sometimes it's hard to say "No" even to such a simple request from a loved person.

The thing I don't think people realise is that when "no" is the right answer for you to give it's really harmful to say "yes" regardless. Take the cup of tea example for a moment  and what would happened if I were to say "yes" when I wanted to say "no". Let's say I was reading a book and was up to a really interesting scene and didn't want to put it down when James asked, but did anyway out of a sense of obligation or something like that. Would I be doing it because I was happy and willing to do a simple task to make my boyfriend's day a bit easier and happier? Of course not, and perhaps I'd start feeling a little grumpy or resentful because of it. And is that helpful to our relationship? Not at all. Perhaps this was a bit rambly [even by my standards] but my point is that even if you feel like you are obligated to help when asked, if you are unable or unwilling to do so for whatever reason, you shouldn't and you shouldn't feel bad about it.

However, this brings me to a third thought. Think back again to that last time you refused a request for help. How did the asker react? I find that I'm frequently met with a snide comment, an affronted "Oh, okay then" or some passive-aggressive comment or even the silent treatment [though not ever from James, I should clarify. He's always nice]. Even offering a compromise; "I can give you a lift, but in an hour when I was already planning on going out that way" is often met with that kind of response. So that's not encouraging me to be honest and say no when I need to, so there may be a build-up of resentment, which leads to nicely strained relationships all around. Not much fun. And due to my grumpiness about feeling obliged to give other people what they want I in turn may react badly when someone turns down my request.

What I'm trying to say is that not only do we need to realise that there is no shame in asking for help, but that there is also no need to be ashamed of saying no if that's the right answer, and if you ask and are denied that is okay. Sometimes the person asked is unable to give the help and support the asker wants, and the asker has to respect that. What's really awesome, even if no help is given, is that by asking and answering honestly, you've started or deepened a relationship with a fellow human. And that, to me, is pretty damn important and also a really awesome thing.

Obviously Amanda was talking about asking on a larger scale, but I find that in this as in many things the same principles hold true despite the scale. Mostly it comes down to honesty.